The proportion of women on Team Canada at the Pyeongchang Winter Olympic Games this year is the highest in Canadian history, but it’s still not quite on par with the number of men.

While there may be more woman competing in the winter Olympic games than ever before, the proportion of total athletes has remained relatively stable for the past two decades, hovering around the mind-40s.

Compare that to the Summer Olympics, however, and you see a different story. 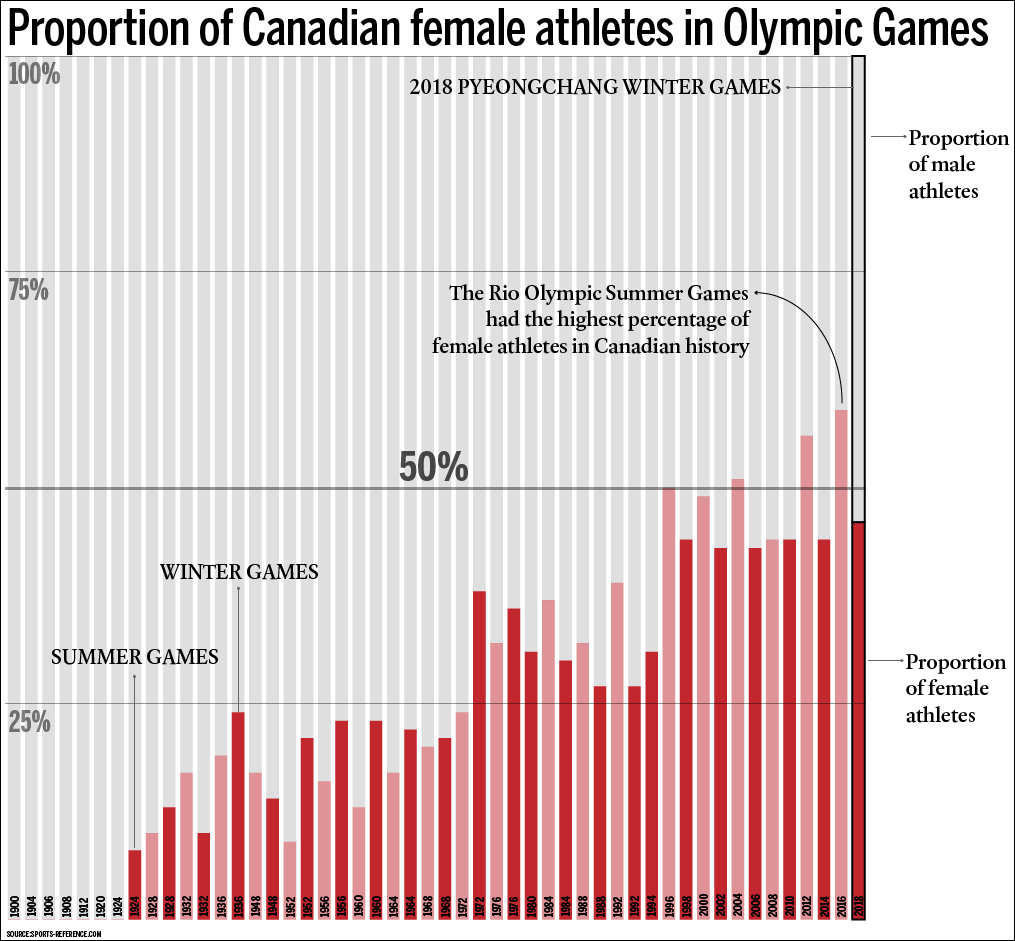 Since the 1996 Summer Olympic Games in Atlanta, the number of female athletes increased nearly every game. The last summer Olympics in Rio saw an all-time high for Canadian women athletes. Not only were nearly 60 per cent women, they also brought home a majority of the medals (16 out of 22), largely thanks to Penny Oleksiak’s record-breaking haul.

Peter Donnelly, the director of Centre for Sports Policy and co-author of a gender equality audit of the Sochi Olympic games in 2014, speculates that one reason for the discrepancy between the summer and winter games could be because Canada qualified more women in team sports in the summer games than men.

In the winter games, however, that’s not the case.

A look at the sport-by-sport gender breakdown of this year’s team gives insight into why there are more male athletes than female in Pyeongchang. One reason: the competitors for the two of the ‘mixed gender’ events are made up of men.

Take the Luge, for instance. While the doubles luge event is technically open to both genders, no women qualified for the event – not in Canada nor internationally. Canada sent eight athletes for luge – three of them are women, five are men.

The four-man Bobsleigh has a similar pattern. Women’s bobsleigh was introduced as an Olympic sport in 2002, but only as a two-man event, while male athletes were able to compete in two-man and four-man events. This year, however, the four-man event was changed from a men’s-only event, to a mixed gender event.

Despite the change, however, the Canadian four-man team is still composed of all men. Team Canada has a total of 18 bobsleigh athletes – 12 of which are men, six are women.

Canada bobsleigh star Kallie Humphries was a strong advocate for a four-man bobsleigh event for women. Thanks in large part to her pushing, the International Bobsleigh and Skeleton Federation announced in 2014 that the it would allow mixed-gender teams. Later that year, Humphries made bobsled history by becoming the first Canadian woman to compete in a four-man event, driving an all-male crew. Humphries told Sportsnet in 2016 that she hoped opening the four-man event to mixed gender team would “open the door” for women to have their own four-man event, separate from the men.

The one mixed-gender event at Pyeongchang that has equal representation is curling. The mixed event had its debut at an Olympic games this year and it paid off for Canada. Canadians John Morris and Kaitlyn Lawes won the first Olympic gold medal in the event on Feb. 13.

READ: Pyeongchang 2018: Why mixed doubles curling deserves to stay in the Olympics

The number of athletes sent for short-track speed skating, skeleton and ski jumping are equal between genders and the number of women competing in figure skating outnumbered the men by one. All other sports – alpine skiing, bobsleigh, cross-country skiing, freestyle skiing, ice hockey, long-track speed skating, luge and snowboarding –have more male athletes on the team than females.

MORE ABOUT THE OLYMPICS: