Pyeongchang 2018: Why mixed doubles curling deserves to stay in the Olympics

Opinion: Behold a version of curling that puts men and women on equal footing, and cuts out the game's boring parts. What's not to like? 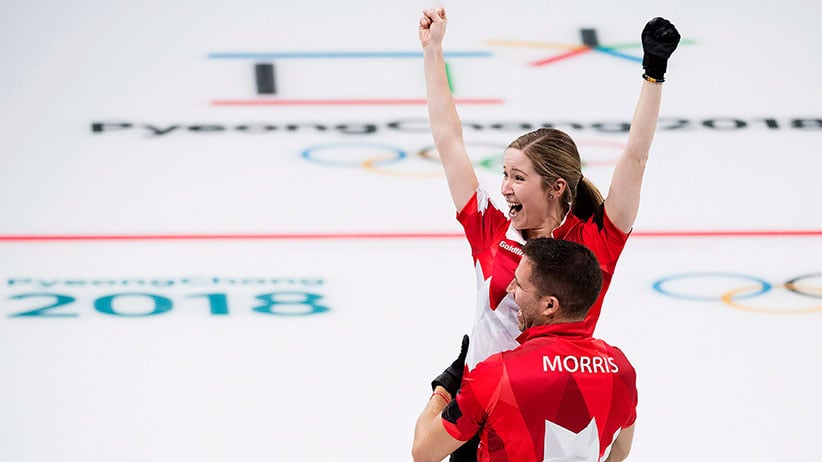 Curling does not have a popularity problem in Canada. Between the Brier, the Scotties Tournament of Hearts, the Grand Slam of Curling and countless other ad hoc tournaments and skins games, the sport gets it more than its fair share of TV coverage.

But never before the Pyeongchang Winter Games has a mass Canadian audience gotten an extended dose of mixed doubles curling, which made an experimental Olympic debut in Korea, culminating in Team Canada gold for John Morris and Kaitlyn Lawes.

While the event is considered a novelty to some and a made-up sport to others, mixed doubles deserves a permanent place at the Games—not to mention rinks across Canada—and not merely because it offers Canada a virtual lock on a medal every four years.

Its virtues start with an inherent emphases on equality: mixed doubles puts team members and genders on even footing in terms of both influence over the game and public recognition. In traditional four-on-four curling, the skip is the face of the team—the leader, the shot caller, the one who shoots the last rocks.

Prior to Tuesdays gold medal in Pyeongchang, Lawes had already won Olympic gold in Sochi while shooting third for Team Canada. Yet Lawes’s name went largely unnoticed outside curling circles because, well, she wasn’t the skip. John Morris also had an Olympic gold, from Vancouver 2010, but he wasn’t skip either, and therefore didn’t get the same kind of acclamation.

In the mixed doubles game, each shot is considered jointly, and no one curler stands above his or her teammate for fame or glory.

Then there’s the nature of the game itself, which is less time-consuming and just as high-scoring as the traditional version: Effectively, it fast-forwards through the most boring parts. For example, in traditional curling, the first four of the eight stones thrown per team are pretty boring to watch. Someone throws a guard. The next stone goes in the rings. Maybe there’s attempted pick—a shot designed to slightly move the guard out of the way.

Mixed doubles economizes on time partially by having only five stones thrown per team, but also by dint of each end starting with two stones already in play. One team gets a stone in the rings, the other gets a guard. It’s how most traditional curling games start anyway. So why not simply place the stones there each end so we can all get on to the good stuff?

Traditional curling also has the rare—if not nearly rare enough—blank ends, when a team tries to keep all stones out of the rings in hopes of finishing no points for either team. The strategy exists so the team shooting last can keep last rock for the following end. When an end repeats with one team putting a lone stone into the rings and the other always clearing it out, it’s hardly an exhibition of skill. Or, for that matter, wits.

In mixed doubles curling, however, that strategy doesn’t exist. Under its rules, a blank end results in the the team with last shot losing the hammer. As a result, fans end up with more rocks in the rings, more pressure, more steals, more excitement.

Finally, teams of two allow for better team chemistry and interpersonal—in some cases, familial—dynamics. Team USA was represented by the Hamilton siblings, Matt and Becca of Madison, Wis., who weren’t afraid to voice their frustration with one another. (“Don’t roll your eyes at me,” Matt at one point told his sister, a comment picked up by microphones for everyone to hear.) The Russian curlers, meanwhile, were a husband-wife duo.

Canada’s Lawes and Morris, meanwhile, were merely a last-minute duo slapped together when neither of their respective women’s or men’s team qualified for Pyeongyang for the traditional event. Yet they both managed to get their names etched into Olympic history one more time.

Imagine what might happen if Canadians start treating mixed doubles as part of the regular curling landscape, and actually train to compete in it.

As Morris said after winning gold, mixed doubles curling is athletic, fun “and the beer still tastes just as good after the game.”