Pyeongchang 2018: These best friends are also the top bobsled rivals

Canadian Kaillie Humphries won gold in Vancouver and Sochi. Now, the woman standing between her and an Olympic threepeat is her American training partner 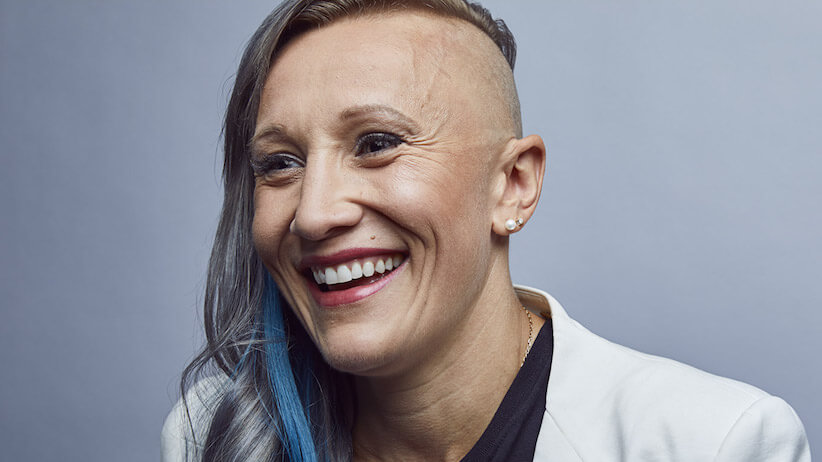 Kaillie Humphries is sitting in a downtown convention centre in her hometown of Calgary, about 60 km east of where she tore down a bobsleigh track for the first time, and she’s on the topic of her chief rival, an American named Elana Meyers Taylor. “I know, I know,” the two-time Olympic gold medallist says, smiling and throwing up her tattooed arms, “I could pick a different friend.”

She really could. On the bobsleigh circuit, Humphries has dominated for the better part of a decade, there are dozens of elite athletes the 32-year-old could choose to call her closest buddy. There are plenty of fellow Canadians, to be sure. And yet, she’s grown closest to the woman who has the best chance at dethroning her as Olympic champion.

And yet, if Meyers Taylor doesn’t win, “I want Kaillie to,” she says. If the Canadian doesn’t win, well, “I want Elana to,” Humphries says.

The two became friends on account of a devil-you-know situation: Humphries trains with Meyers Taylor in order to push herself so she can beat Meyers Taylor when it really counts. Meyers Taylor, of course, has the same game plan. In the process of working out together they became fast friends — “she’s very likeable,” Humphries admits — because they have everything in common, nationality aside. No one else feels the pressure they do to win, in Humphries’s case because that’s what she does at the Olympics, in Meyers Taylor’s because she let gold slip away four years ago. And if you ask Humphries, nobody works quite as hard as they do. “I could be friends with shittier people,” she says, “but they’re shittier for a reason.”

And so, the woman who’s looking to become the first to ever pilot back-to-back-to-back sleds to Olympic gold is going to remain close with the American who could beat her in Pyeongchang, her friend Elana, the training partner whose ass she wants to kick. Because, as Humphries admits, “I need her.” 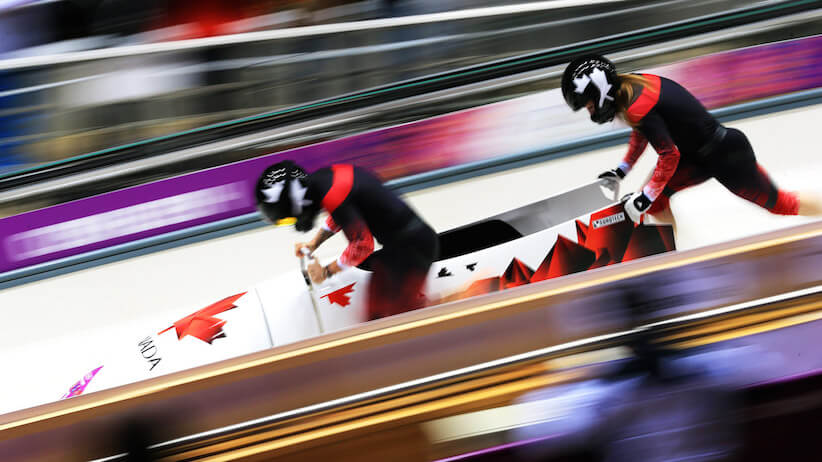 In Pyeongchang, Humphries is looking to become the first to pilot back-to-back-to-back sleds to Olympic gold. (Sampics/Corbis/Getty)

That devil-you-know situation? Blame a UK-born sprinting coach. Stu McMillan is his name, and he has coached skeleton, bobsleigh and track-and-field athletes from Canada, the U.S. and Great Britain to more than 30 Olympic medals (among his current clients is sprinting phenom, Andre De Grasse). McMillian is the best bobsleigh push coach in the world, “and there’s no argument,” Meyers Taylor says. The coach will tell you that’s because he’s one of just five or so people on the planet with that job description, but still, four years ago at the Sochi Olympics, McMillan coached at least one athlete in each of the women’s medal-winning sleds. “Why would you go with anyone else?” Meyers Taylor asks.

It was McMillan who trained Meyers Taylor in the lead-up to her bronze-medal performance at her Olympic debut in Vancouver in 2010, while she was a brakeman. Meyers Taylor switched to pilot soon after and tried some other coaches, but ahead of the 2012–13 season she asked McMillan if she could join the Calgary-based training group he’d assembled. He was happy to oblige, of course, but he told Meyers Taylor she’d have to clear it with Humphries first. “The group dynamic when people are training together is very, very important,” McMillan explains.

Humphries had the reaction you’d expect when Meyers Taylor first floated the idea at a world cup stop in Switzerland: “I wanted to say no,” she says. “There was no way I wanted to share with her.” Humphries is McMillan’s longest-running client, and they’re now in their 11th year together. Eventually, after speaking with McMillan and thinking it over, Humphries became convinced it was actually a good idea. “Maybe she didn’t know it then,” McMillan says, “but she needed somebody at that level to train with to give her a little bit of additional motivation.”

MORE: The North Korean figure skaters have a Canadian connection

And it turned out Meyers Taylor pushed her more than a little bit. “There was nobody within our Canadian system and nobody in the world that was going to push me athletically or mentally more than Elana,” Humphries says. “If I was going to continue after Vancouver to be dominant, to continue to defend gold, I couldn’t become complacent … I wouldn’t be the athlete I am today without Elana pushing me as hard as she does.”

Humphries will be first to admit, though, that it can be incredibly frustrating training side-by-side with her rival. Meyers Taylor is, after all, an athletic specimen. She’s not tall, at five-foot-five, but she is 180 pounds of mostly muscle. As the American puts it, “I’ve got some genetic gifts,” thanks to her dad, Eddie, who played in the NFL. “I’m freakishly good at squatting,” she says.

Those gifts mean Humphries is rarely the strongest in their training sessions in the gym. “I see on a daily basis that I’m not the best,” Humphries explains. “She reminds me that on any given day I can be No. 2 or No. 3. I have to fight for that No. 1 position.” As Meyers Taylor points out, “If I’ve gotta squat 180 kilos [397 pounds] to out-push her on the track by a little bit, then I’m gonna do it.”

If you ask Humphries, she’s the best pilot in the world, but Meyers Taylor is “by far” the fastest starter. Meyers Taylor holds the start record — the time it takes from the moment a team begins pushing the sled to the moment both sliders have jumped in and are seated — at a couple of tracks, but she says that Humphries is closer than the Canadian thinks. “I feel like Kaillie could sit on the couch for two weeks and be just as good at pushing,” Meyers Taylor says. “She’s figured out how to push a sled, and it’s unlike anything I’ve ever seen. She’s so efficient; she’s so natural.”

Meyers Taylor has had the upper hand with her push times this season in a few races and won’t hesitate to let her training partner know it. “I trash talk all the time,” she says. “I don’t know whether or not she likes it, but she entertains me at least.” The two don’t talk on race day, but in the lead-up, you might hear Meyers Taylor say something like, “I’m coming for you!” Humphries has her retort down: “History will prove that’s not gonna make a difference.”

MORE: Pyeongchang 2018: Patrick Chan proves he can deliver under pressure

It’s all part of the friendship, of course. Ask either pilot what she likes most about the other and the word “competitive” comes up pretty quickly. Humphries is in a distinct category in that regard, says McMillan, who’s never seen her drive waver. It’s impressive for any athlete, but especially one who competes in a sport that receives so little mainstream attention. “She’s got a very clear understanding of what she’s driven by when she gets up every morning, and that’s been consistent for a decade,” McMillan says. “The athletes who aren’t as successful as Kaillie, they’ll go through periods of their training careers where they lose that drive, that passion, that love for the sport. And she’s really driven by being the best, continuing to go out and prove to everybody that she’s the one to beat.”

Humphries is the first to admit that fire means she isn’t easy to work with. “I know I’m not,” she says with a laugh. “I demand a lot from my teammates and my coaches, but it’s nothing that I don’t demand of myself. Am I control freak? One hundred percent. Do I need things to be the very best? One hundred percent. That’s how I’m the best.”

Four years ago in Sochi, at the Sanki Sliding Centre, it looked like Humphries and brakeman Heather Moyse were going to be second-best. Through three runs, Meyers Taylor and Lauren Williams had a 0.11-second lead on the Canadians, and this after Meyers Taylor had to rebuild parts of her sled after it hit a wall in a training run and “shattered into pieces.”

But on her fourth and final run, Meyers Taylor made a costly driving error, hit the wall and lost Olympic gold. At the bottom of the track, Humphries and Moyse — who’d already finished their final run — watched USA 1 cross the line with a cumulative time 0.10 seconds slower than theirs. The Canadians jumped up and down, hugging and screaming in celebration.

Humphries and Meyers Taylor didn’t see one another until they were on the podium, and it wasn’t until all the athletes had received their medals and the Canadians had belted out the anthem that the rivals hugged. When they talked later, it wasn’t about the result. “I knew she was gutted,” Humphries says. “She feels like she lost the gold and didn’t win the silver.” Meyers Taylor left Sochi before the closing ceremony. “I needed to get out of there, with everything that happened, my sled breaking and not being too happy with my performance,” she says. “I felt it was best for me to leave.” Her friend, meanwhile, carried Canada’s flag in the closing ceremony, and celebrated becoming the first female pilot to successfully defend an Olympic title.

MORE: Pyeonchang 2018: These are Canada’s medallists

The outcome of that race has been driving Meyers Taylor for the past four years. Since her silver-medal finish, she has piloted USA 1 to two world championships, including last year in Germany, where Humphries ended up on the second-highest podium step. “When you come that close to that Olympic gold medal, you can’t help but use that to push you forward,” Meyers Taylor says.

Pyeongchang, then, offers a chance at redemption for Meyers Taylor, and an opportunity to make history, yet again, for Humphries. The Canadian says the target on her back feels enormous. “This will be a three-peat,” Humphries says. “Is that what I’m working towards? Definitely. At the same point, I don’t devalue my competitors, I know it’s going to be a hard-fought battle. They’re going to step up because they want their first Olympic gold-medal experience, and I don’t want to give it to them. It will be a challenge, but one I’m ready for, one I’ve worked for, and one I will do everything to attain again.”

Meyers Taylor can’t wait for a second chance to pilot Team USA to Olympic gold, for another shot at beating her friend on the biggest stage. But she wants to make one thing clear: “I don’t want to beat her because she did something wrong,” Meyers Taylor says. “I want to beat her when she’s at the top of her game.”

Her training partner couldn’t agree more. “We call it the ‘Battle Royale,’” Humphries says. “May the best person win.”

This article originally appeared on Sportsnet.