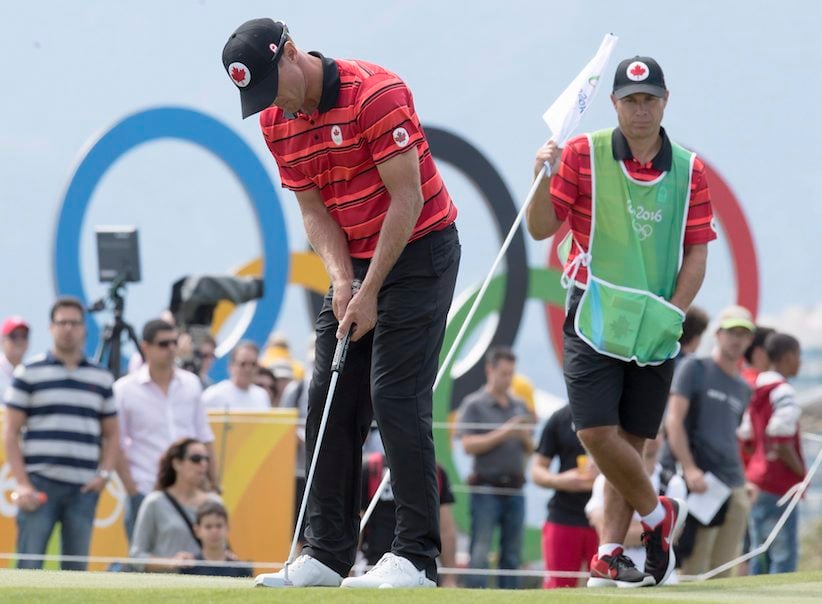 Canada’s Graham DeLaet putts out on the 16th hole as his caddie, former NHLer Ray Whitney, tends the pin in the first round at the 2016 Summer Olympics in Rio de Janeiro, Brazil, Thursday, Aug. 11, 2016. THE CANADIAN PRESS/Frank Gunn

With 679 assists in 1,330 career games in the National Hockey League, Ray Whitney has always been at home setting others up.

The two-time NHL all-star hung up his skates in January of 2015, but he’s found a new outlet that allows him to lend a hand. Whitney made his caddying debut Thursday at the Olympic Games in Rio de Janeiro, helping fellow Canadian Graham DeLaet to a five-under 66 in opening round play.

Whitney on his debut, via Luke DeCock at the News & Observer:

“A little nerve-wracking at times,” Whitney said. “But pretty smooth. It was actually easier when the tournament was going on than in the practice rounds. You’re getting a lot of information then. Now you’re hitting and you’re moving on. It wasn’t bad, just trying to keep up. They move at a pretty good pace and you’re fumbling around with clubs and hoofing the bag and headcovers and you’ve got to get the yardage.”

Whitney’s Olympic opportunity opened up when DeLaet’s regular caddy Jules Trudeau opted to forgo the trip to Brazil. DeLaet joked that Trudeau’s presence may have led to an even better finish on Day One.

“I probably would have done better with Jules,” DeLaet said. “[Whitney] did great out there. We had a lot of fun. He kept me nice and loose. We had a good time.”

DeLaet led the field briefly on Thursday before he was bumped by Australia’s Marcus Fraser.

Golf made a return to the Olympics for the 2016 Rio Games after a 112-year absence.