Ready or (mostly) not, the Rio Games begin

Security is swarming, the venues are iffy and the opening ceremony will be a low budget affair. Tolerance is the watch-word. 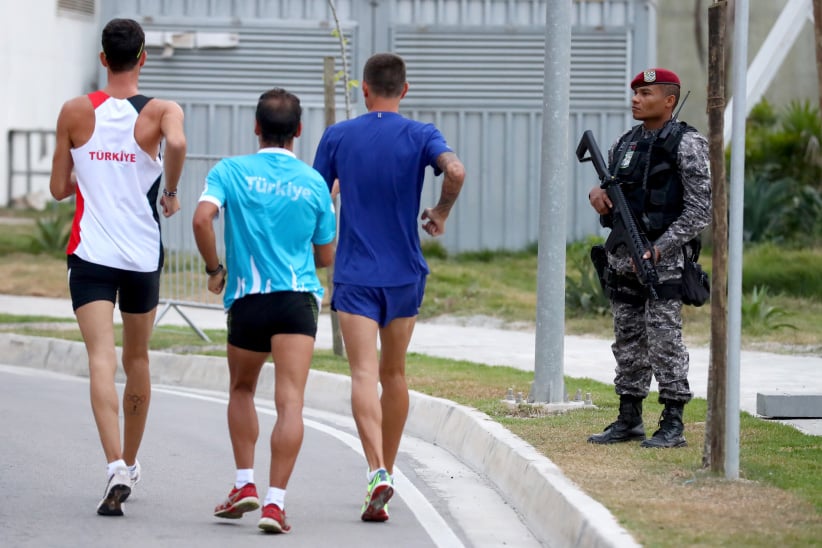 Police security officer is pictured as athlets walk at the Olympic Village ahead of the Rio 2016 Olympic Games. (Alexander Hassenstein/Getty)

The official slogan for the Rio Olympics is Um Mundo Nuvo, “A New World.”

Which is nice, but not really honest or accurate. This sprawling metropolis of 12 million people is too busy dealing with its difficult present to indulge in fantasies of reinvention.

Earlier this week, as the Olympic torch made its way through the outlying suburbs, they had to call out the riot squad to disperse anti-Games protestors on three different occasions, using tear gas and reportedly firing rubber bullets. Brazil’s three-years-and-counting economic and political crisis—precipitated by the plunge in world oil prices—has frayed the polite bonds of society. Budgets and salaries have been cut  for schools, hospitals, civil servants and the police. And spending at least $12 billion on the Olympics (the true cost is undoubtedly much higher) no longer seems like such a great idea against a backdrop of otherwise flinty state austerity.

The vistas at the beach side competition venues in Copacabana, and the lagoon in Ipanema, are stunning, but the water stinks of sewage. There’s a paucity of the usual Olympic rings, signs and banners, because organizers ran out of money. More than 85,000 police and soldiers are in the streets—backed up by 1,000 U.S. intelligence officers, advisors and anti-terror commandos—to make them safe. Yet crime continues to be a story. On Thursday night, two men on motorcycles tried to mug the occupants of a car stuck in traffic outside the main Olympic plaza in Barra. It was not a good choice. The driver—a 60-year-old Brazilian lawyer who acts as Russia’s vice-consul in Rio—went all Jason Bourne, beating them up with his jiu jitsu skills. Then he pulled out his gun and shot one of the robbers dead. The other assailant fled.

Thieves have also been at work in the Athletes Village. The British swim team lost nine bags filled with competition suits, caps and goggles, which is more than an inconvenience given that competition at the Olympic pool starts Saturday. A Morrocan boxer has also been arrested for an alleged sexual assault in the village.

The bad news continues. At a preliminary soccer match in the city of Manaus, Thursday, the Nigerian team, which had finally made it to Brazil only hours before, was greeted with somebody else’s anthem. (Regardless, the team ended up beating Japan 5-4.) Back in Barra, an Australian swim coach has pulled his athletes from the practice pool, over concerns about the water quality. “It started out nice but for some reason as the morning wore on the water got really soupy in that pool,” Michael Bohl told the Sydney Morning Herald.

And the Brazilian men’s soccer squad, ranked ninth in the world, kicked off its tournament with a 0-0 draw against South Africa, ranked 67th. At a sidewalk bar in Ipanema, the small crowd that had gathered around a TV to watch went through all the stages of grief as the game progressed, and Team Brazil blew chance after chance after chance. Denial, anger, bargaining, depression, then acceptance—typified by Portuguese oaths, lighting a cigarette and calling for another glass of cachaca.

Overall, the mood is low key. The party is still on, but everyone knows it’s not going to be quite as extravagant as originally planned.

Fernando Meirelles, the famed director of City of God, who is charge of tonight’s Opening Ceremony, kvetched about his ever-shrinking budget for the starting and ending pageants, which began at US$114 million and finished at $56 million. “This has been a very difficult process,” he said. “When we started we were rich, we had an international crew, we watched some shows in Vegas, we were very ambitious with the technology we wanted to use.”

“Now our budget is $55.9 million for four ceremonies. Most of this money is for security, and all the stuff around the show. I think it is 12 times less than London, 20 times less than Beijing. This makes it very challenging.”

The theme will be tolerance.

“The world is very tense,” said Meirelles. “The political situation is also highly tense here in Brazil. I think in the United States with Trump, England with the Brexit, and so on. The whole world is under this tension. This is shown in the ceremony, and the solution for that comes through tolerance.”

For the athletes, spectators and media, it may also end up being the watch-word for the 2016 Summer Games. Rio isn’t a new world, but rather the same old troubled one. And all anyone can do is grin and bear it.