‘If the [skin-tight] uniform was so great and enhanced your ability to move, then males would be wearing speedos. But they’re not’ 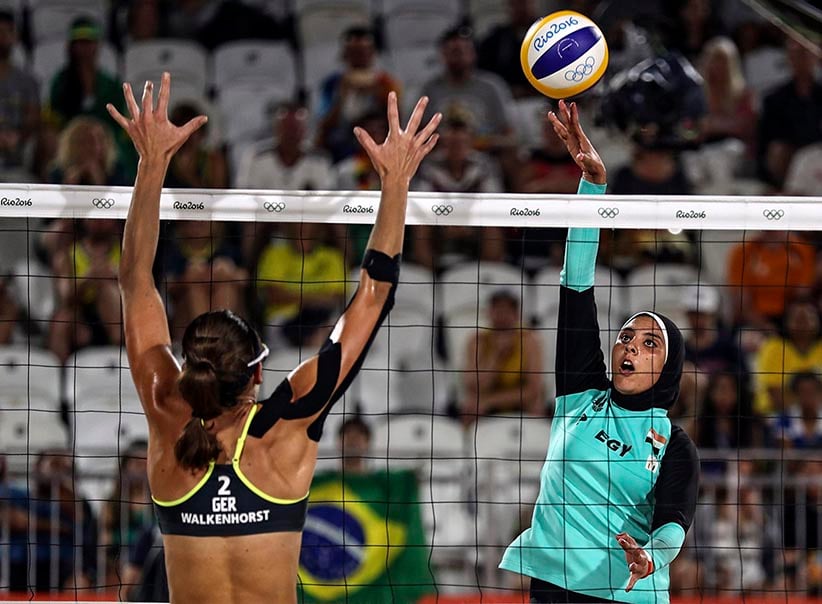 Doaa Elgobashy of Egypt (R) spikes the ball against Kira Walkenhorst of Germany (L) during the women’s Beach Volleyball preliminary pool D game between in Rio on August 7. (ANTONIO LACERDA/EPA/CP)

In beach volleyball terminology, it’s called a “joust”: two opposing players both touching the ball in mid-air as they try to push it over the other side. For those who watch beach volleyball, it happens almost every match—nothing special. But when Egypt’s Doaa Elghobashy and Germany’s Kira Walkenhorst were photographed in Rio, it was different.

Walkenhorst was in her sports bikini—the uniform that’s become as much a talking point for the event as the women’s athleticism—while Elghobashy, to put it simply, wasn’t.

For the Games, it was a symbol of diversity. Many fans called it beautiful. But as the sport’s governing body, the FIVB, talks about opening up the sport culturally, Charlene Weaving isn’t afraid of another joust. 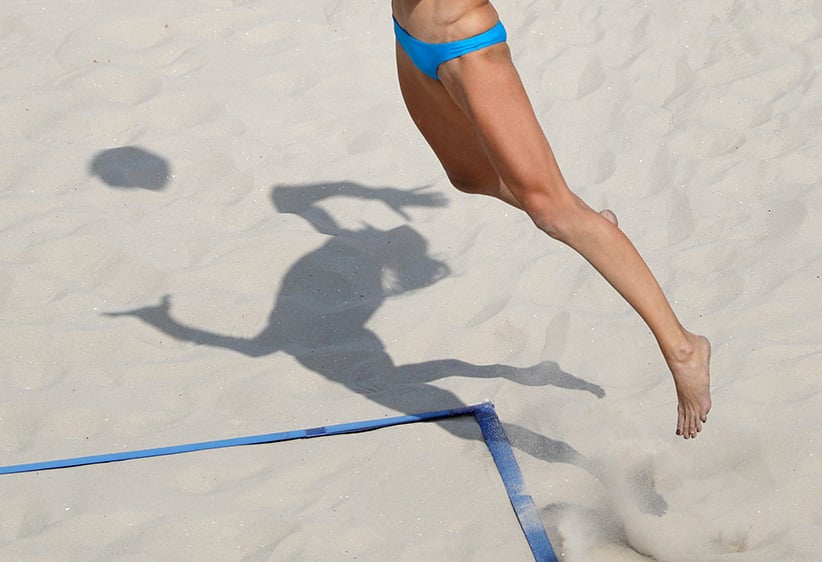 Russia’s Ekaterina Birlova casts a shadow on the sand as she serves to Poland during a women’s beach volleyball match at the 2016 Summer Olympics in Rio Tuesday, Aug. 9, 2016. (Marcio Jose Sanchez/AP/CP)

“The FIVB is selling it like this major milestone,” says Weaving, an associate professor of human kinetics at St. Francis Xavier University. “What I find gets lost in the discussion is why the uniform rule was even created in the first place.”

The reason, says Weaving, author of Buns of Gold, Silver and Bronze: A critical analysis of the state of Olympic women’s volleyball, was simply to sex up the women’s side of the sport. And it worked. After all, seemingly every match write-up comes with a mandatory butt-shot photo. Sponsors, meanwhile, came in droves to the beach volleyball’s DJ-blaring, bikini-wearing party atmosphere. The uniforms were so specific that up until the 2012 Games, the bottoms had to “be a close fit and be cut on an upward angle toward the top of the leg,” according to the old rule book. “The side width should be maximum 7 cm.”

But it wasn’t always a party for the players. The Australian Sports Commission complained to the FIVB after a rule change in 1999, saying the sport’s governing body “introduced uniforms intentionally to focus attention on the athletes’ bodies rather than for any technological, practical or performance-enhancing reasons.” Namely, women were told they had to wear a bikini. The new regulation quickly drew scorn from some top female competitors of the day, like American Gabrielle Reece, who told CNN: “You take one step, that bathing suit goes straight up. You’re always yanking and fiddling.” Reece preferred her long Lycra tights.

But rules were rules. “They were essentially told if they don’t wear it, they don’t play,” Weaving says.

But only recently when the FIVB faced negative press for keeping Muslim women off the courts with uniform criteria, says Weaving, did it finally relent. And yet the majority of the female competitors still choose to wear the bikini, even with other options available to them. “I don’t blame the players,” Weaving says. “That’s really important. It’s not their fault. The blame needs to be on the systemic sexist federation and culture that tells how women feel they need to dress.”

But beach volleyball bikinis are designed for peak performance, not sexiness. At least that’s what American Walsh Jennings told the Huffington Post. “When it comes to beach volleyball, we’re playing in 100°-plus-weather.” In 2012, Walsh told USA Today. “You don’t want to be wearing big, baggy shorts. They get in the way.”

And yet they don’t seem to get in the way of the men. “If the [skin-tight] uniform was so great and enhanced your ability to move, then males would be wearing Speedos,” Weaving says. “But they’re not.” 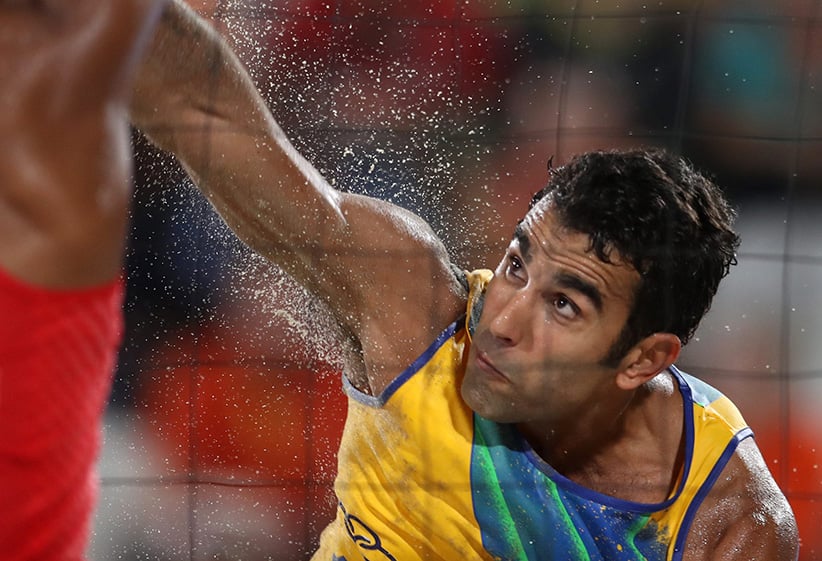 Sand and sweat comes off the hand of Brazil’s Pedro Solberg after he spiked a ball during a men’s beach volleyball match against Cuba at the 2016 Summer Olympics in Rio de Janeiro, Brazil, Sunday, Aug. 7, 2016. (Petr David Josek/AP)

Nor are men even allowed to take off their tops—even if it sexes up the sport like a Top Gun movie—no matter how hot it gets. During the Pan Am Games in Toronto last year, Canada’s Melissa Humana-Paredes told Now magazine that she’s seen plenty of guys playing with their tops on blaring hot days, as per the rules, even though they were visibly uncomfortable. “I actually think it’s unfair for the guys where they have to be so covered,” she said.

So why does the FIVB require that men wear tops and long shorts instead of sexing up the sport even more? “It’s something we’ve seriously considered, but right now for financial reasons we can’t do it,” said Angelo Squeo, FIVB director for beach volleyball, in an interview with Reuters. “The promoters want the men to wear tops because they need space for sponsors.

“They’ve already got hardly any space with the girls.”