Andre De Grasse finished his Olympic Games Friday by capturing his third medal after Canada was able to win bronze in the men’s 4×100-metre relay after the U.S. was disqualified.

De Grasse’s Olympic experience may be over, but that doesn’t mean Canada’s podium hopes are finished as more hopefuls remain on the track and out on the water.

Here are some notable events and Canadians to closely monitor on Day 15 in Rio. 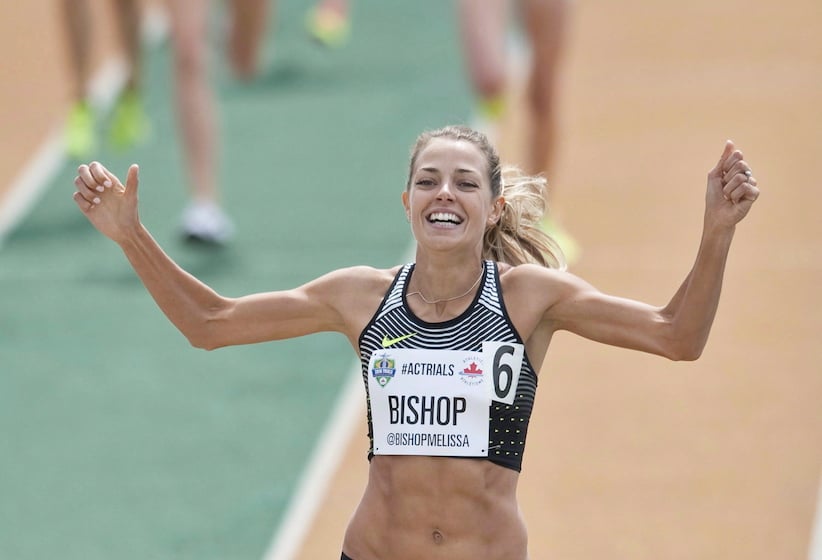 Athletics
Eganville, Ont.’s, Melissa Bishop will lead Canada’s medal hopes on the track Saturday. The 28-year-old will be competing in the women’s 800 metre final at 9:15 p.m. ET. If her silver medal at last year’s world championships and gold at the Pan American Games is any indication, she will be a strong podium contender.

Joining Bishop as a possible threat on Day 15 is Somalia-born, St. Catharine’s resident Mohammed Ahmed in the men’s 5,000 metre final. Though not the same event, Ahmed has real pedigree in top-level distance competition, winning the gold in the 10,000 metre at the Pan Am Games in Toronto. Ahmed’s race begins at 9:30 p.m.

Golf
After a scorching second-round 64 that saw her move well within striking distance of the lead, 18-year-old Canadian phenom Brooke Henderson stumbled in the third round, shooting a 75 to knock her seven strokes off the pace of leader Inbee Park at 4-under.

Henderson will be in tough to catch Park, but she is only four shots back of third place and five strokes back of second, meaning a medal is still a possibility should she find that second-round form again.

Henderson tees off at 9:00 a.m. Fellow Canadian Alena Sharp, who is well off the pace at 3-over for the tournament, begins her round at 8:11 a.m.

Batty won the event at the 2015 Pan Am Games in Toronto. Pendrel, meanwhile, is a former two-time world champion in cross country mountain biking, winning the crowns in 2011 and 2014.

Diving
Vincent Riendeau, a 19-year-old Montreal native, will be competing in the men’s 10-metre platform semifinals beginning at 11:00 a.m. Fellow Montreal resident Maxim Bouchard reached the semis of the event as a reserve so there’s also a chance he’ll get to earn his way into the finals, although it’s unlikely.

Should one of the two men reach the final, that competition is scheduled to start at 3:30 p.m.

Triathlon
Three Canadians are competing in the women’s Olympic triathlon Saturday, Sarah-Anne Brault, Amelie Kretz and Kirsten Sweetland. Their gruelling day will begin at 11:00 a.m. in the water.

The Guelph, Ont., resident will be in tough in his opening match, facing London 2012 bronze medallist Komeil Ghasemi from Iran at about 10:08 a.m. Should Jarvis pull off the upset he’ll continue wrestling throughout the day until the bronze and gold medal bouts, which are scheduled for 6:00 and 6:30 p.m., respectively.

Soccer
Not Canadian related, but still of interest is the men’s gold-medal soccer game between Germany and Brazil.

It goes without saying that soccer is a huge deal in Brazil and a win would probably be the most important one for the host nation, particularly after their World Cup disappointment on home soil two years ago and with superstar Neymar at the helm of the team.

This is a big-time match between two global soccer powers and is worth putting on any sports fan’s radar.