Women in Rio are constantly made secondary to men, their athletic achievements downplayed. More people are speaking out about it than ever before. 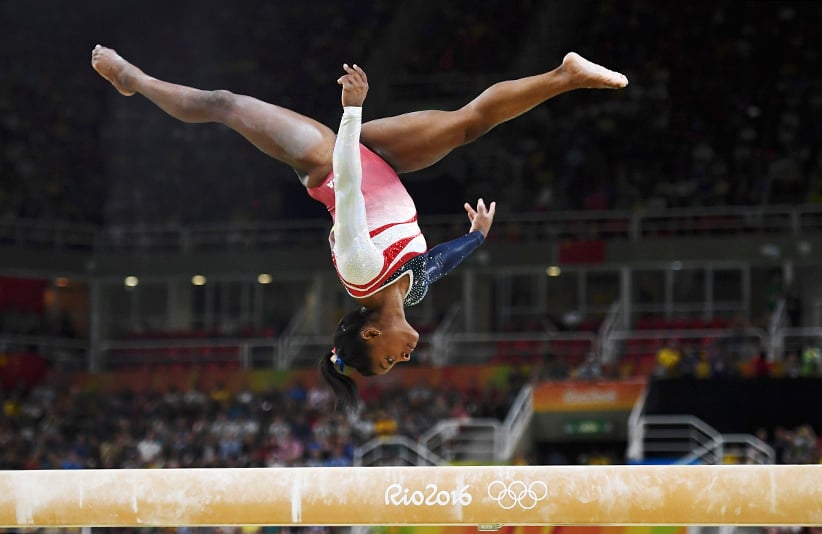 Smone Biles of USA competes on the beam during the women’s team final on Tuesday. (Dylan Martinez/Reuters)

Andy Murray isn’t a tennis historian, nor is he responsible for fact-checking journalists. He’s a tennis player—and a great one at that—but to his credit, he’s also aware when he hasn’t made history.

In an interview after Murray won gold in the men’s singles tournament in Rio, the BBC’s John Inverdale told him: “You’re the first person to ever win two Olympic gold tennis medals. That’s an extraordinary feat, isn’t it?” To which Murray replied: “I think Venus and Serena [Williams] have won about four each.”

Murray didn’t directly call out the BBC presenter for overlooking the existence of women’s tennis, but he may as well have. While his response was widely applauded, it is but a lone bright spot in an Olympics where underlying sexism continues to reach the podium.

“I’d like to say it is improving, but there are often these constant reminders of how progress is so slow,” says Charlene Weaving, an associate professor of human kinetics at St. Francis Xavier University. “There’s still the subtle trivialization that occurs for media coverage of female athletes.”

The list thus far—and this is far from exhaustive—includes:

“I don’t recall there being this many examples of repeated sexist commentary [in London 2012],” says Cheryl Cooky, a sociologist at Purdue University who has studied gender representation in sports media. “It sends the wrong message to boys and girls that—even in 2016—what matters for female athletes is what they’re doing off the field or court, as opposed to their individual achievements.”

The main difference in Rio, says Cooky, may be that more people are speaking out against the bias. “They’re finally listening to what we’ve been critiquing for the past 25 years—this sexism in media coverage,” Cooky says. “Before, unless it was really egregious, sports media was given a pass.”

Cooky credits feminism becoming more mainstream of late, even compared to just four years ago, as celebrities like Beyoncé, Taylor Swift and Emma Watson have all spoken out at high-profile events. And it’s not just women. U.S. President Barack Obama penned a feminist essay for Glamour magazine earlier this month, while Prime Minister Justin Trudeau said last year that he was “proud to be a feminist.”

“I don’t think the burden of defence rests solely on the capable shoulders of my female teammates,” wrote Canadian Olympic kayaker Adam Van Koeverden in an essay posted on his website last week. “If men don’t call out men when we are being sexist, then we are not a part of the solution, and the problem persists. So here I am, calling out my friend Adam Kreek. Adam, you were sexist on television last night.”

For those who don’t know Kreek, the former Olympic rower-turned-motivational speaker was on CBC offering his commentary on Eugenie Bouchard’s poor tennis form of late, saying: “She’s posting photos of herself. She’s holding up the toothpaste. She’s trying out different hairstyles. Maybe she wants something different than being a competitor.” Kreek apologized soon after the Van Koeverden’s op-ed was published.

“I think of the Olympics as the best of times and the worst of times for female athletes,” says Cooky, invoking the words of Charles Dickens. “We get to see women playing sports, but unfortunately those antiquated stereotypes are alive and well in the coverage.

“It’s up to sports media to cover female athletes [in a way] that prioritizes their athletic achievements without pandering to outdated stereotypes or gender roles.”