Shaunae Miller and The Dive that has everyone talking

'The only thing I was thinking (about) was the gold medal,' says 22-year-old from the Bahamas. 'The next thing I know ...' 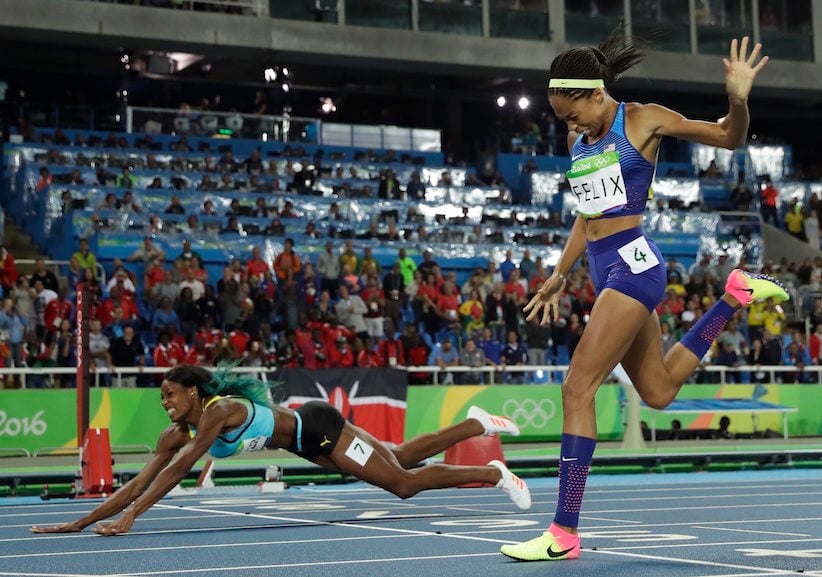 RIO DE JANEIRO — For beating Allyson Felix, Shaunae Miller gets a gold medal. Maybe they should give her a cape, too.

It took a head-first dive, Superwoman-style, for Miller to spring an Olympic upset Monday over America’s top female sprinter in the 400 metres and deny her a record fifth gold medal.

Miller, a 22-year-old from the Bahamas, took an early lead, then held off Felix’s charge along the straightaway. Neck-and-neck with two steps to go, Miller sprawled and tumbled across the line to win by .07 seconds.

Now, instead of a coronation for Felix, it’s a celebration for Miller, second to the American at last year’s world championships. Her dive will go down as one of the most dramatic images we’ve seen at these, or any, Olympics.

Not that she planned it that way.

“I don’t know what happened. My mind just went blank,” Miller said. “The only thing I was thinking (about) was the gold medal, and the next thing I know, I was on the ground.”

As Miller lay on her back, gasping for breath and maybe even stunned herself at what she’d done, Felix sat on the ground stone-faced. Ten seconds passed. Then 20.

The winner’s first clue came from the stands, not the scoreboard, which showed Miller winning in 49.44 seconds, ahead of Felix and bronze medallist Shericka Jackson of Jamaica.

A familiar voice cut through the air.

“I heard my mom screaming,” Miller said. “When I heard her screaming, I was like, ‘OK, I had to have won the race.”‘

And yet, she didn’t even get the evening’s biggest roars. Those were reserved for pole vaulter Thiago Braz da Silva, who gave Brazil its first medal in track and field by setting an Olympic record (6.03 metres) to upset world-record holder and defending champion Renaud Lavillenie of France. 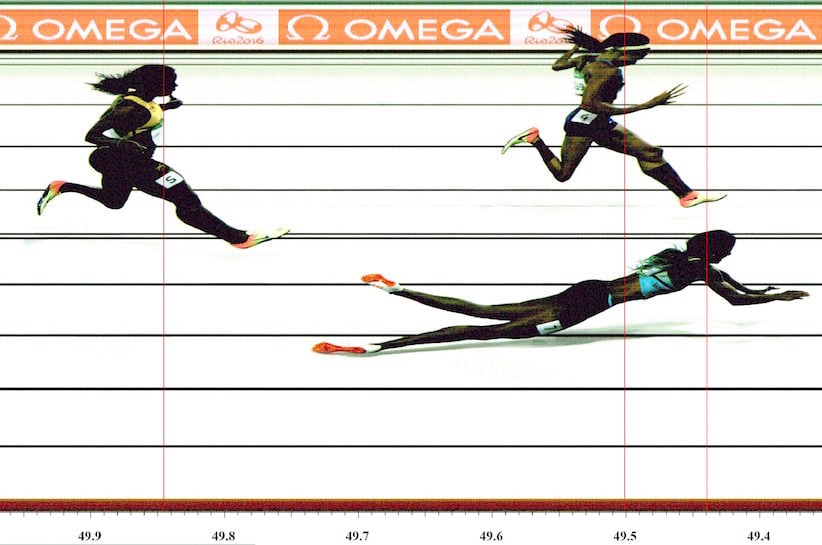 The image provided by OMEGA on Monday, Aug. 15, 2016 shows the photo finish of the women’s 400-meter final when Bahamas’ Shaunae Miller, bottom right, falls over the finish line to win gold ahead of United States’ silver medal winner Allyson Felix, top right, and Jamaica’s bronze medal winner Shericka Jackson, left, during the athletics competitions of 2016 Summer Olympics at the Olympic stadium in Rio de Janeiro, Brazil, Monday evening, Aug. 15, 2016. The figures at the bottom indicate the time when the chest of the athletes crossed the finish line. (OMEGA Timing via AP)

In the 800 metres, David Rudisha of Kenya won a second straight gold medal, and Clayton Murphy picked up bronze for the United States.

But The Dive is what everyone will be talking about.

Starting from Lane 7, Miller expanded the lag, instead of getting gobbled up the way most women do when Felix is on the track.

Stride for stride they ran down the last 100 metres, until the last few steps. Felix, classically trained by Bobby Kersee, made a textbook lean into the finish line. Miller tried something else. Something no coach would ever teach.

“She gave everything she had and her legs gave out at the line,” said Miller’s coach, Lance Brauman, who also works with 100-meter silver medallist Tori Bowie of the U.S. “Was not intentional.”

Then again, amazing things happen with a gold medal at stake.

While Miller jumped with her arms flailing forward, the rules say the win is determined by which athlete has any part of her torso cross the line first. The photo finish showed Miller’s shoulder barely beat Felix to the line.

“I don’t think I ever quite had a year this tough,” Felix said, as her eyes welled with tears.

She was one of those rare athletes who had the cachet to get the Olympics to change the schedule. After winning the world championship at 400 metres last year, she put the 200-400 double in her sights for the Olympics. The schedule as it was originally written made it impossible: The 200 heats were scheduled for the same evening as the 400 final.

Felix asked, and she received: The 200 heats were moved to the morning to give America’s best female sprinter a chance for the two-fer.

But she never got to the starting line in the 200. She landed awkwardly on a medicine ball while doing core work in the gym during the spring and her ankle swelled up like a balloon.

Suddenly, what once was a quest for two golds transformed into a struggle to simply make the Olympic team. She did in the 400 but not in the 200. Then, Miller showed up and handed Felix her third Olympic disappointment. This silver goes with the pair she won in 2004 and 2008 in the 200.

Even so, she became the most decorated U.S. female track star, with seven overall medals, including three in the relays. She may be lining up for the U.S. in both relays, which could bring her gold-medal count higher. 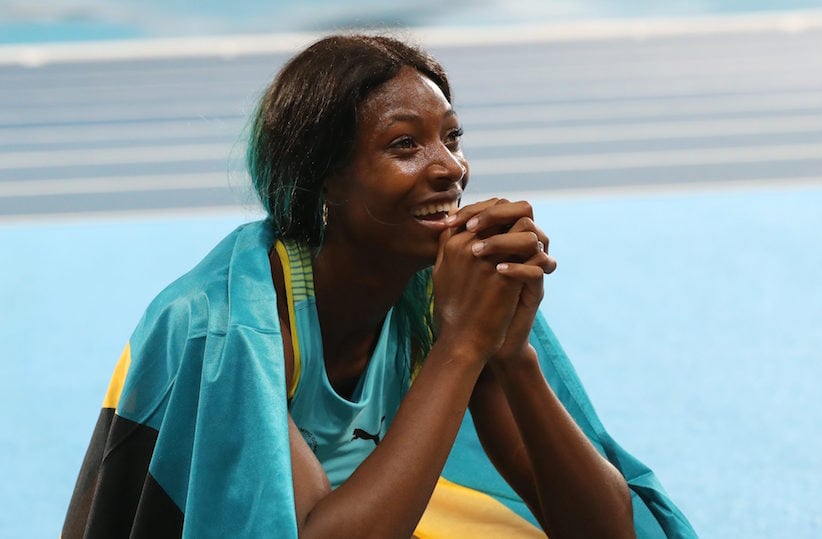 But this was Miller’s night.

The flagbearer for her country in the opening ceremonies, Miller came into the games 5 for 5 in her races this season, including Diamond League meets in Shanghai, Eugene and London.

A wild finish to a crazy night.

It began with a downpour that stopped action in all the events and put the DJ to work, playing “Singing In The Rain,” “Umbrella,” and “I Can’t Stand the Rain,” among other fare, while the fans waited out the delay.

Those who stayed got their money’s worth.

Miller ended up with a few scrapes and bruises.

“My body is kind of numb,” she said. “It’s all just burning right now.”

The pain will go away. That gold is hers forever.