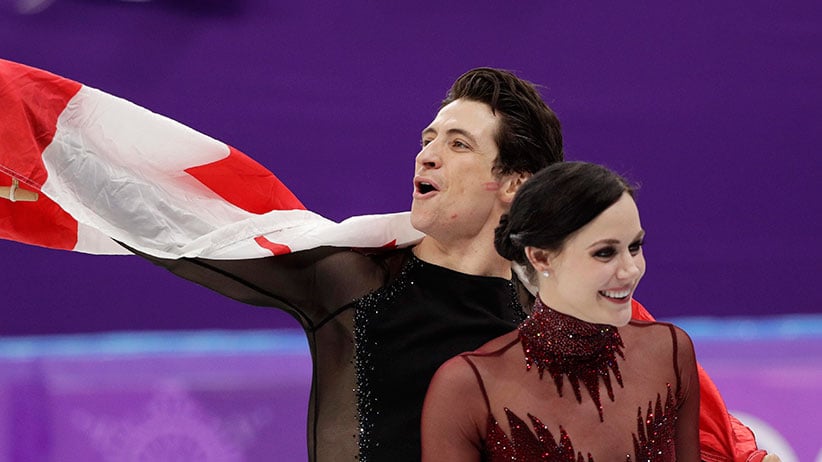 Virtue and Moir celebrate during the venue ceremony after winning the gold medal in the ice dance (AP Photo/David J. Phillip)

The final Olympic free program of their spectacularly accomplished careers was brilliant, Tessa Virtue and Scott Moir radiating a joy and verve and passion that swept up a Gangneung Ice Arena crowd which stood and cheered when the four minutes were up.

The Canadians totally killed it, even the most untrained eyes could see that, and though Gabriella Papadakis and Guillaume Cizeron had established new world records with their free score and point total one pair earlier, there should have been no doubt about who won the gold.

In the murky world of ice dance judging, however, there is always reason for doubt, always room for uncertainty. And given that the French pair finished the short within two points of Virtue and Moir despite an inferior performance, the whispers had started that the fix was in for Papadakis and Cizeron to end up on the podium’s top step.

Hence, in the kiss and cry after, Canada’s flag-bearers held their breath, believing they had done enough to win but unable to be sure, as did their fans following along, almost willing the judges to do the right thing.

Incredibly, they did, Virtue and Moir earning a score of 122.40—they needed at least 121.62 to win—for a world record total score of 206.07, putting a golden finale on an on-ice partnership that began when she was seven and he was nine, and led to a figure-skating record five Olympic medals.

READ MORE: Q&A: Tessa Virtue and Scott Moir on their careers and chemistry

The captivating duo beamed on the ice, they glowed off it and their euphoria was absorbing.

Virtue and Moir did all they could to avoid leaving things to chance, perhaps a hard lesson learned from the Sochi Games in 2014, when they ended up second to Americans Meryl Davis and Charlie White. As Rosie DiManno of the Toronto Star explained afterwards, there were subtle ways for judges to manipulate the scoring system if they were so inclined.

In December, after they finished second at the ISU Grnad Prix final, they decided to make a change to the end of their Moulin Rouge routine free program, when Virtue’s character dies and collapses to the ice. Instead, she went limp across Moir’s arms as he spun her in the air, and that may have squeezed out the extra points they needed.

Still, Moir conceded that the high French score in the short program caused him to raise an eyebrow—“it was tight and we felt like we kind of blew the roof off the arena yesterday,” he said—but he quickly tried to shrug his shoulders.

“That’s the scoring system,” he said. “There’s nowhere else for us to go, that’s an Olympic record for us, Gabby and Guillaume, what they do well is their skating skills, you have to reward that I feel, and you need to keep the space for the other teams. Yeah, we felt like we’d have to have our skate and that’s exactly what we wanted. We knew today we’d have to come out strong and we were up against it a little bit. I did see that in the marks. What do you do? That’s the sport of ice dance and we can’t see like you guys can see. We just have to control what we do.”

And they did, without a doubt.

Marie-France Dubreuil, who along with former ice dance partner and husband Patrice Lauzon coach the Canadian and the French pairs in Montreal, praised both teams, saying they each skated, “close to perfection.

Lauzon said when he initially watched Papadakis, who performed through a dress issue that at one point exposed her nipple during the short, and Cizeron, he “saw stuff,” but after catching their first skate it on replay, felt “it doesn’t show that much.”

Ultimately, he said, Virtue and Moir “could not have skated the two programs better.”

The gold medal is their third, as they won the ice dance at the 2010 Vancouver Olympics and then helped Canada claim the team event in Pyeongchang. They added silver in both the ice dance and team event at Sochi.

Virtue and Moir gave up skating following the 2014 Games, she was convinced they were done for good with him fairly certain but willing to leave the door open.

For two years they laughed at the idea of a comeback before it stopped being funny and they approached Dubreuil and Lauzon.

Soon they were back at it, eager to finish strong at one more Olympics.

At the end of their long program, Virtue cupped her hand over her mouth while Moir pumped his fist and then they shared a long hug, having performed at their best when it counted.

“It’s an overwhelming feeling because it’s something we have envisioned for so many years,” said Virtue. “That moment has replayed in my mind over and over but you just never know what will go through your head. I couldn’t help but think about the 20 years we’ve spent working for this moment and the incredible team of people behind us.

“It’s so special. We’ve received so much support and it didn’t feel like we were alone on that ice today.”

Lauzon accurately described them as once-in-a-generation talents while Dubreuil added that the length of time their partnership had endured was an obvious advantage.

“They were born under good stars, because they found each other at a young age,” she said. “It’s a partnership that kept growing. Twenty years of skating together, I mean, eyes closed they know what the other one is doing.”

During an interview in the summer, Virtue, from London, Ont., and Moir, from Ilderton, Ont., laughed at the memory of their very first skate together.

Moir remembers continually doing the wrong steps, prompting Virtue to say, “I’m pretty sure no one was looking at us thinking these two have potential, these two are going places.”

“I’m pretty sure our parents were laughing at us,” Moir added.

That humble start was the beginning of the greatness to follow and the easy way they have around each other is endearing. At one point in the mixed zone, Moir turned to Virtue and apologized for talking so much, and she smiled and told him to keep going.

Later, on the dais for the post-event news conference, they quietly shared laughs when not answering questions, relishing what’s expected to be their last great on-ice achievement.

RELATED: ‘When it comes to figure skating, I’d be more shocked if the fix wasn’t in.’

“When I watch the single skaters go out there by themselves, it’s terrifying, because we rely on each other for so much,” said Moir. “We’ve skated together from a young age to chase what should have been a crazy dream to our parents at the time. Obviously it pays off because we know each other pretty well, but also, I think that’s a reason we came back. I would never even think about skating with somebody else, the whole reason why I wanted to come back to skating was to be close to Tessa again, to share those moments and we’re very proud of our business relationship. It’s been very, very special.

“Twenty years – who can say that? It makes me appreciate in my head sometimes driving to the rink that I’m still excited to see Tessa at the arena for warmup. We won’t ask her if she says the same. But in saying that, who enjoys going in to work every day for 20 years? It’s ridiculous.”

Virtue and Moir wouldn’t confirm that the plan to retire, even though their coaches talked about them as if their competitive careers were over.

At the same time, when the tension of a tough competition against strong opponents and the stress of waiting for the judges was still fresh, there was relief it was all over.

They’d beaten Papadakis and Cizeron, and survived the system, too.

“You know what the beautiful part is? And I’m sorry that you’re going to hate this answer, but we’re done. We’re definitely done for the year, we don’t know what our future holds, so I don’t have to look at the (marks) breakdown anymore. It’s fantastic. I’ve never felt so free,” said Moir. “But yeah. We were looking at that at Grand Prix finals, we were trying to find every little point, we were able to do that here today. It comes down to style, it’s what you prefer. We skated our asses off and we’ve got to be proud of that. Points for us? I don’t really care anymore.

“We’re going to get that Olympic gold medal. That’s awesome.”