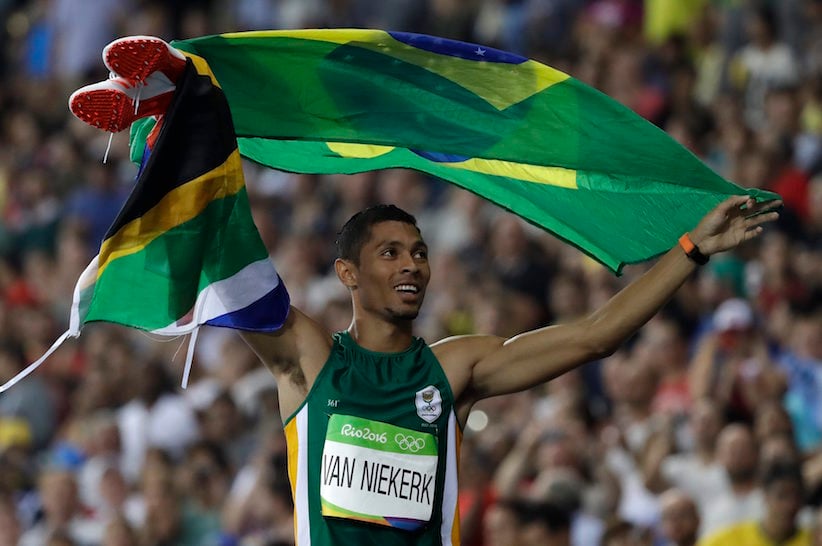 He didn’t need to. It was just him against the clock.

The South African sprinter broke Michael Johnson’s 17-year-old world record on Sunday night in Rio de Janeiro, leaving two of the greatest one-lap runners of this era in his dust. Van Niekerk finished in 43.03 seconds — 0.15 seconds faster than Johnson ran on Aug. 26, 1999 in Seville, Spain. To think, Johnson’s mark was considered one of the almost untouchable records in track, too.

The 24-year-old Van Niekerk leaned at the finish line, which he really didn’t need to do as Kirani James of Grenada and LaShawn Merritt of the Unites States weren’t even in the picture. James, the defending Olympic champion, finished with the silver and Merritt, who won gold eight years ago in Beijing, hung on for bronze as he staggered across the line.

Van Niekerk drove a wedge in the rivalry between James and Merritt at the world championships last August, when he beat them both with such a lung-searing performance that he left the track on a stretcher.

Now, he’s the fastest ever.

Instead of collapsing at the finish this time, Van Niekerk dropped to one knee and put his head in his hands. Moments later, he draped the multi-colored South African flag around his shoulders and took off his spikes. As he did so, Van Niekerk pointed at the clock to make sure everyone saw his time.

Hard to miss. It was that impressive.

Even Usain Bolt thought so, seeking out Van Niekerk and congratulating him moments after the Jamaican won his unprecedented third 100 title. The compliments kept on coming with Johnson, a track and field TV analyst for BBC, weighing in as well.

“Oh my God! From lane eight, a world record. He took it out so quick,” Johnson told the BBC. “I have never seen anything from 200 to 400 like that.

“That was a massacre from Wayde van Niekerk. He just put those guys away.”

They didn’t stand a chance. James thought he possibly had enough in the tank to catch Van Niekerk around the final curve. No way.

No one did. This was really a race for silver, with James easily holding off Merritt, who had to dig deep to cling to the bronze.

“He just wouldn’t slow down,” James said. “Usually, what happens is the last 100 (meters) guys start to slow down a little bit, but he just kept going. When you keep going like that, obviously a record is going to fall.”

Akani Simbine, who is Van Niekerk roommate in the Olympic Village, said his teammate was targeting the record.

“But we didn’t bring it up much because that’s just added pressure, you know,” said Simbine, who finished fifth in the 100 final. “He knows what he needs to do and we believe in what he can do.

“It was just a thing of, OK, he said he’s going to do it, break the world record, and here he did it.”

A world record — precisely what the sport needed in the wake of a Russian doping scandal that grabbed the headlines before the Olympics.

A fast, fresh face — also a boost since Bolt can’t be around forever.

“Van Niekerk is so young, what else can he do? Can he go under 43 seconds?” Johnson said. “It is something I thought I could do, but never did. Usain Bolt will be retiring soon. This could be the next star of the sport.”