Why is an Olympic gold medallist wearing this on his head? 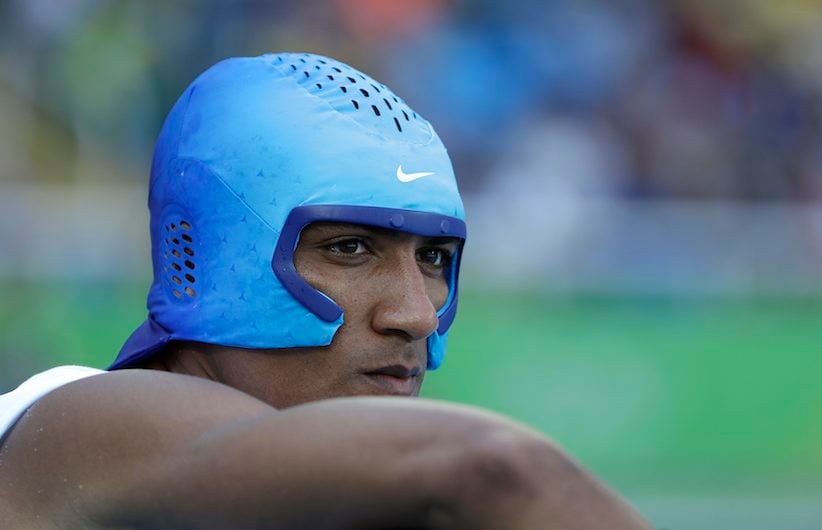 United States’ Ashton Eaton wears a cooling cap during the shot put of the decathlon during the athletics competitions of the 2016 Summer Olympics at the Olympic stadium in Rio de Janeiro, Brazil, Wednesday, Aug. 17, 2016. (AP Photo/Matt Slocum)

Ashton Eaton just can’t seem to wear any headgear without raising a few eyebrows. First, the American Olympian was called a “traitor” by some for wearing a Team Canada cap in Rio, even though it was to support of his wife, heptathlete Brianne Theisen-Eaton. And now that he’s leading the field to defend his Olympic gold medal, his new gear is turning more heads.

What exactly is Ashton Eaton wearing on his head? https://t.co/1jMyFHrbsa #Rio2016 pic.twitter.com/neMbhD3I4V

What looks like a prop from the Gladiator movie is actually his personalized “cooling cap,” which Nike designed specifically for Eaton. With a gruelling 10 events in the decathlon competition, Eaton has technical reasons to explain why he looks like Magneto (from the X-Men) during breaks between events.

I feel like Ashton Eaton suddenly has a ridiculously unfair advantage in the shot put pic.twitter.com/NzdBfdNFVh

“After asking questions about current recovery techniques, the conversation prompted me to ask myself: Why does it feel good, after running, to pour a bottle of water over your head?” he said in a press release before the cap’s unveiling last year. “I don’t know the physiological answer, but the fact that it does feel better makes me perform better.”