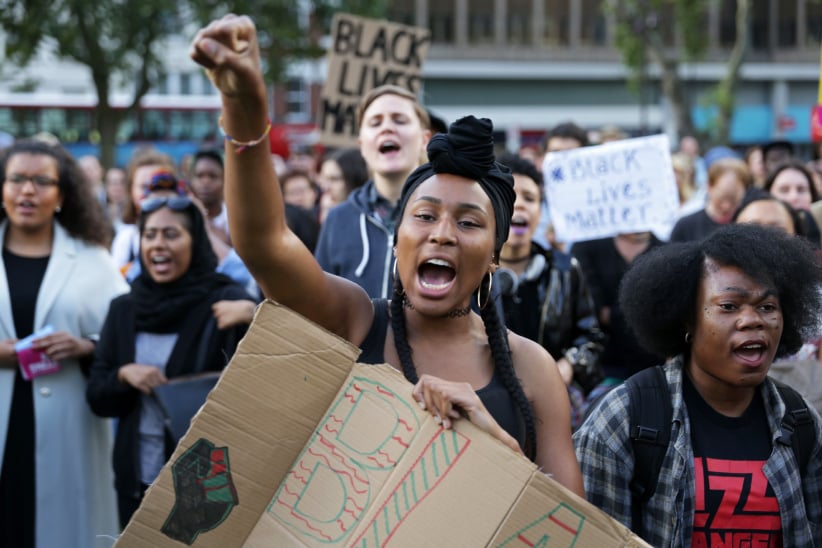 People chant and hold up with placards as they attend a Black Lives Matter event on August 5, 2016. (Daniel Leal-Olivas/Getty)

Melayna Williams holds a J.D., and is the director of the Rights Advocacy Coalition for Equality (R.A.C.E.).

It’s been quite a year for race and advocacy in Canada. We have seen Canadians begin to understand that white supremacy and alt-right thinking exist and are problems in our own country. Some have begun to understand that their own privilege made them blind to these issues in the past. We have also seen more Canadians of colour adding their voices to national conversations. The media has just begun to grasp the benefits of passing the mic to marginalized communities instead of speaking for them.

This year, I’ve observed more people listening, reflecting and actively using their privilege to support people of colour in real ways. It is being an ally in a way that is neither performative nor shiny. It involves challenging white supremacist structures—from generational wealth to social safety nets—that benefit them, without burdening racialized people with the guilt or expectation of intellectual and emotional labour. If 2017 has taught us anything, it’s that white Canadians have at least begun to listen to people of colour. Whether or not Canadians will embrace allyship by making genuine space and attempt to actually begin to relinquish their privilege is another question. The hope is they will have no choice: In 2018, Canadian voices of colour will get louder and more persistent.

READ: Why should Jagmeet Singh have to meet racist heckling with ‘love and courage’?

These voices have found a home and an audience. Activist and journalist Desmond Cole walked away from his Toronto Star column after he detailed the ways in which he said the paper attempted to get him to write about race less often. Not only does Cole remain a bold and unapologetic voice, but his tireless activism has actually led to one poll suggesting Torontonians would welcome Cole running for mayor in 2018.

And while the media has gotten better, the way it chooses voices to represent Blackness can still reinforce white privilege, fragility and supremacy. Take, for instance, the Oct. 31 episode of TVO’s The Agenda, where host Steve Paikin led a discussion around activism and allyship with Annahid Dashtgard of Anima Leadership and Jamil Jivani of the Citizen Empowerment Project. (Curiously, while Black Lives Matter was a topic of discussion, no member of the group appeared.)

While the conversation initially seemed focused on approaches to activism that could shift people’s mindset, it often turned to tempering these movements instead. Dashtgard thanked organizations like BLMTO and Idle No More for affecting change through their work, but Jivani discredited BLMTO’s message, claiming that using phrases like “white supremacist” to describe Prime Minister Justin Trudeau is an irresponsible use of language. “I don’t like the idea of any group of people thinking they have the authority to decide what constitutes speech that’s worth sharing and what’s not, because I can see it being an authority that can be very easily abused in various situations,” he said. “So I would like there to be a university campus where, if a white supremacist wants to do a speech, that person comes and people who want to hear it are welcome to hear it. And then another person who wants to talk about white fragility can come do a speech.”

This dangerous argument creates a false equivalence between a side fighting for rights and liberation and another, fighting only to maintain power. Similarly, Canadians too often attempt to silence or dismiss marginalized voices when they push back against normalized and subtle discrimination. In June, Indigenous activists Jocelyn Wabano-Iahtail and Sophie McKeown, while speaking out on the MMIWG inquiry, challenged CBC reporter Julie Van Dusen for asking inappropriate questions. Van Dusen said, “Most Canadians feel that Justin Trudeau is making an effort; I gather you feel what he’s doing is not worthwhile?” The media focused on defending Van Dusen rather than trying to hear why her questions were disrespectful. Glen McGregor from CTV News immediately pronounced the question “not racist.” It was the white reporters who failed to see the flippant manner in which they were discussing the humanity of Indigenous people and the expectation that the community be satisfied with piecemeal government efforts. It erases the colonial history of this country to ask a community to see progress from a single government. “The moment that we have our voice and our backbone, you shut us down,” Wabano-Iahtail said. “The moment we tell you that because of your colonial mindset and way of being, white privilege, white fragility, you can’t take our truth.”

READ: Is racism different in Canada?

This lack of respect in communication is a form of white entitlement, says Shannon McDeez, who helped organize a rally against white supremacy in October. “I’m always grateful when people from marginalized backgrounds or underserved communities help me contextualize and understand but are under no obligation to share their struggle,” she told me. She defined allyship as “Listening more than talking, understanding that you will be tested in a few ways . . . to truly give up your power—in order for equity to happen, certain people have to lose a little bit in order to gain.”

In order for people to process, understand and most importantly believe marginalized people, self-appointed allies cannot make attempts to quell the voices of the folks they should be listening to. With the white supremacist messages clearly surfacing in the mainstream Canadian consciousness, mobilizing is only rational. 2018 will be when Black Canadians continue to take up space—and allies move aside and pose the right questions.