The verdict on the U.S. presidential debate: God help us all

Andray Domise: Trump showed up as a wrestling match villain, while Biden’s unwillingness, or perhaps inability, to dial into anti-establishment anger left him hopelessly outmatched. 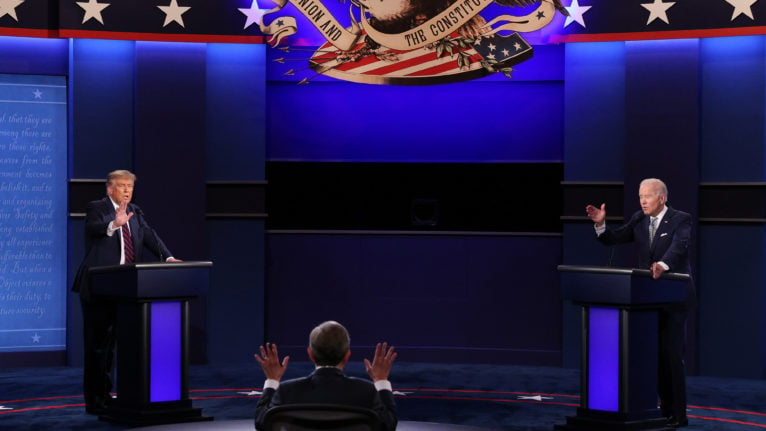 It’s difficult to pin down quite what went wrong with Joe Biden’s performance in the first Presidential debate of 2020. There was the vast difference in tone and substance between himself and his opponent; Donald Trump’s answers were assertive, succinct, and teeming with lies, while Joe Biden’s answers meandered through every avenue of a mind seemingly exhausted by the recall of policy minutiae. There was Trump’s willingness to take the fight both to Biden and moderator Chris Wallace (at one point, Trump landed a jab on Wallace, claiming he was debating the moderator as much as his opponent), while Biden struggled to summarize Trump’s multitude of failures with any greater energy than one might muster to chew sawdust.

Wherever it veered out of the realm of Presidential politics and into the gutter of reality TV, almost the entirety of the debate was waged in the muck where Donald Trump is most at home. At various points in the debate, Trump labelled Biden’s policies “socialist” (a pandemic and a recession couldn’t move Biden to support Medicare For All, much less workers owning the means of production), called Biden’s supporters “radicals” (Biden’s centre-right base has spent much of the last six months bashing the party’s disaffected left wing), and unleashed a salvo on Joe Biden’s son Hunter (who, in addition to his struggles with addiction, is at the centre of corruption allegations related to a Ukranian oil and gas holding).

Under normal circumstances, Biden’s muted demeanour and responses might be taken as those of an elder statesman rising above the mudslinging. But these are far from normal times, and the circumstances in which America finds itself are a checklist of worst-case scenarios. In addition to an ongoing pandemic, where governors and municipal officials can’t even agree on whether people ought to wear masks in enclosed spaces, and in addition to spiralling income inequality that has almost completely detached the stock markets from the material state of human existence, the existential crisis of climate change looms large over the world’s largest polluter and purveyor of human misery abroad.

Biden, in other words, showed up for a low-stakes Presidential debate in the vein of 2000’s Bush vs. Gore series. Trump, on the other hand, showed up as a professional wrestling villain, ready to cut a 90-minute promo. Trump pointed to Biden’s support of the 1994 crime bill, and accused him of labeling Black teenagers as “super-predators.” Biden couldn’t so much as respond in kind that Trump took out a newspaper spread to call for the execution of the wrongfully convicted Central Park five. Trump accused Biden of wanting to shut down the economy, and took credit for “bringing back football.” Biden argued over what Trump knew about the lethality of COVID and when, completely overstepping the outbreak in the Tennessee Titans’ locker room.

With the global economy and earth’s climate teetering on the ragged edge of collapse, and hundreds of thousands of human lives lost to the outright incompetence — if not maliciousness — of America’s political class, Biden’s unwillingness, or perhaps inability, to dial into anti-establishment anger left him hopelessly outmatched. Perhaps this is a matter of Joe Biden’s generally affable and conflict-averse demeanour, and perhaps it was a limitation for a politician whose neoliberal tendencies simply cannot allow for truly left-wing policy solutions (although the opposition intends to smear him as a radical, regardless).

Whatever the reasons, the first debate was an abysmal disaster for Joe Biden. If that performance represents the height of the Democratic Party’s resistance to fascism in America, then God help us all.