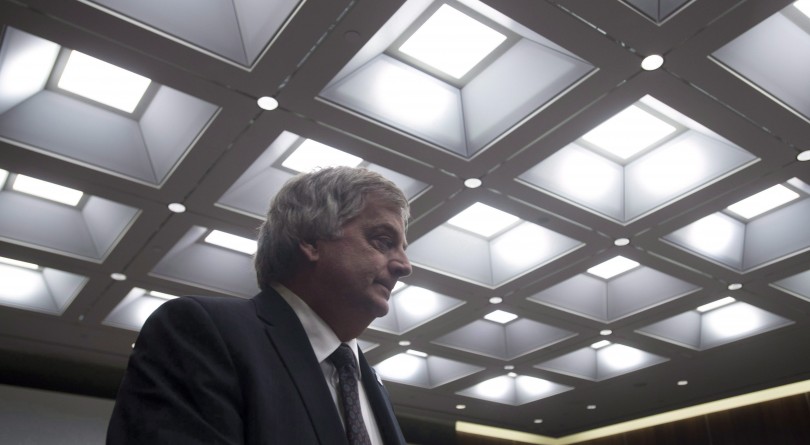 Parliamentary Budget Officer Jean-Denis Frechette waits to appear before the Commons infrastructure committee, Tuesday, February 21, 2017 in Ottawa. The PBO released a report that made an estimation on how much a universal basic income would cost in Canada. (Adrian Wyld/CP)

Hugh Segal is principal of Massey College. He served in the Canadian Senate as a Conservative from Ontario and was vice-chair of the subcommittee on urban poverty.

Every democracy’s internal legitimacy is tied to how fair the residents of that country feel their society is or tries to be. The fairness of laws, the fairness of government generally, the mix of fairness and opportunity writ large across the entire economy, fairness in the workplace and fairness of the tax system—these all matter.

That’s why successful economically prosperous economies have a special duty to keep working at fairness and reducing the pathologies that poverty imposes in ways that deny opportunity, expands the bureaucratic state and widens the gaps between haves and have nots. And we’re seeing just how important this duty is: Recent electoral outcomes in the U.S. and Europe underline that, while perceived economic fairness is not an exclusive determinant of political temperament, it certainly does count. When unfairness is broadly perceived to be pervasive, extreme and simplistic solutions and political voices championing them usually gain strength.

But when it comes to discussing the idea of a basic universal income, we run aground. The usual arguments from the far right (“we cannot afford this,” they say, or “if you pay people for not working, people won’t work”) join with those on the far left (“this is just a way to reduce pressures on the minimum wage or cut back all the other programmes that are vital”) are mutually reinforcing, even though they’re largely inaccurate. Over 60 per cent of those living below the poverty line in Canada have jobs—some more than one—and yet are still beneath the poverty line. Present welfare plans across Canada not only pay less than the poverty line—sometimes 20 to 40 per cent less—but also discourage work by clawing back benefits if more than $100 or so are earned.

The idea, however, is back in the news after Jean-Denis Fréchette, the parliamentary budget officer, issued a report that said that a simple, Canada-wide program would cost a net $43 billion. A policy seen as impossibly expensive has now been costed to around 10 per cent of the entire annual fiscal footprint of the federal government, and that wouldn’t even count the savings from eliminating provincial programs that would be made redundant, like welfare and support for the disabled, and the savings that would come from less people living in poverty.

We’ve even tested the waters in practice before. As I argued at the recent C.D. Howe Institute’s Regent Debate on the topic, in the mid-1970s, Ontario did this through the Guaranteed Annual Income Supplement (GAINS) for seniors over 65, reducing the rate of poverty in that age group massively and leading to better health outcomes, increased longevity and a reduction in the privations that come with poverty. That was the forebear of the Guaranteed Income Supplement brought in for all Canadians by the federal government. In both cases, the Canadian model does not give an automatic amount to everyone and then hopes that the tax system takes it back from those better off (as is now being tested in the Netherlands and Finland). Rather, in Canada, we deploy a top-up: Whatever the gap is in a senior’s income between what they already earn and $1200 per month, the federal government will provide it. For some it might be $600 per month; for others, it’d be less than $300.

And it is essentially the model being tested in a three-year pilot project in Hamilton, Thunder Bay and Lindsay, Ont. The test, which is to involve 4,000 randomly selected Ontarians, would see the automatic top-up replace Disability and Ontario Works (welfare) payments for those now in the system.

The present pilot in Ontario encourages people to work, allowing them to keep 50 per cent of what they earn beyond the automatic top up provided for those beneath the line. Only welfare and disability payments are being replaced. Other social programmes are not.

On the affordability issue, the pilot will allow us to see what it actually costs taxpayers when we do not improve fairness to low-income communities. Poverty is a perfect and accurate predictor of bad health, early hospital entry and longer stays, substance abuse, family violence and poor educational outcomes. The majority of the guests of our federal prisons come from the small minority (which is higher outside the cities, in rural Canada and among First Nations) who live in poverty. Inertia on this file is extremely expensive to the taxpayer, and these pilots will help us understand just how expensive inertia is when compared to a more inclusive, less bureaucratic, more efficient and less stigmatizing approach.

These tests are going on in different democracies around the world because we need to do better than we are doing on the fairness front—both in terms of reality and perception. Coming labour shortages will require anti-poverty programmes that encourage work. Precarious workplace changes will require a reasonable income floor for folks to bridge as the economy seeks different skills.

Productivity, fiscal balance, fair taxation and a profit-generating economy are not served by anti-poverty programmes that leave innovation aside.

We owe those in the workforce, those in poverty not of their own making, and our democracy the courage and character to keep working for the right mix of opportunity, fairness and respect due all our citizens—rich or poor.