A coup attempt is underway in Washington

Scott Gilmore: Call it what it is, an attempt to overthrow the legitimate government. What happens in the next 24 hours will shape America and the 21st Century. 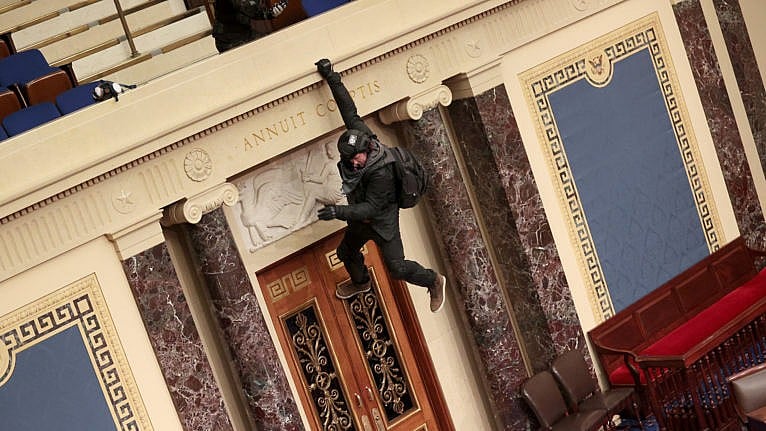 A protester hangs from the balcony in the Senate Chamber on Jan. 06, 2021 in Washington, DC (McNamee/Getty Images)

It is unfolding quickly. While the vice president was inside the Capitol Building, upholding his constitutional duty to recognize that Joe Biden won the election and will become the next president, the outgoing president held a rally outside, exhorting his most radical followers to support him as he vowed to “never concede”.

His supporters, many in military uniform and wearing body armour, then marched on the Capitol intent on stopping Congress from validating the Biden presidency. Fired up by Donald Trump’s claims the election had been stolen from him, they chanted his name as they approached.

Waving Trump flags, they easily pushed past the unusually light security, climbed the steps and began throwing chairs through windows. Inside, the Secret Service evacuated the vice president, who Trump had been threatening all week. As members of Congress fled, Senator Mitt Romney turned to his Republican colleagues and angrily shouted “This is what you’ve gotten!”

READ: The Republican party has become an authoritarian party
PHOTOS: Trump’s would-be insurgents storm the Capitol
PAUL WELLS: So when do we start promoting democracy?

Trump’s followers then stormed the building itself, and fought their way towards the Senate floor. Tear gas was fired in the rotunda. Shots were fired. Police attempted to barricade the chamber with furniture, guns drawn. But it was not enough. The self-described revolutionaries breeched the security perimeters, flooded through the halls, broke into the chamber and one triumphantly sat in the Vice President’s chair.  They succeeded. They stopped the constitutionally mandated recognition of the Biden win.

Hiding in their offices or in nearby bunkers, Republican politicians called into CNN and begged the president to intervene. He only sent a tweet, even then he didn’t call for his followers to stand down, merely encouraged them to respect law enforcement, while news cameras simultaneously recorded bloodied police officers being treated for injuries.

I am asking for everyone at the U.S. Capitol to remain peaceful. No violence! Remember, WE are the Party of Law & Order – respect the Law and our great men and women in Blue. Thank you!

The mayor of Washington and Speaker Nancy Pelosi requested the Pentagon send in the National Guard to protect them.

This is a protest. It is a riot. It is also a coup. I was once a diplomat, and spent most of my time focussed on countries with fragile democracies. I watched crises similar to this unfold firsthand. When I wrote my reporting cables back to headquarters, I called these things what they were: an attempt to overthrow the legitimate government—an insurrection—a coup attempt.

In most coup attempts like this, after the first shock of violence and after symbolic places of power have been seized, the next step is taken by the military. They choose a side. They crack down on the demonstrators, or they protect them. And right now, at this very moment in the Pentagon, the generals are making a choice through their action or inaction: Trump or America.

At this stage, it seems safe to predict they will choose America. But the very fact that this is not certain is a shocking realization. The American Republic has not been threatened like this since the Civil War. Throughout all the crises of the 20th century, the world wars, the depression, Vietnam, Watergate, the survival of the democratic government—the endurance of the constitution was never in question.