A daughter to her widowed father: 'It’s not too late to find happiness with someone new'

Before You Go: When her mum died, Ishani Nath and her dad became closer, talking like never before. The one thing they've avoided: what if he wanted to date again? 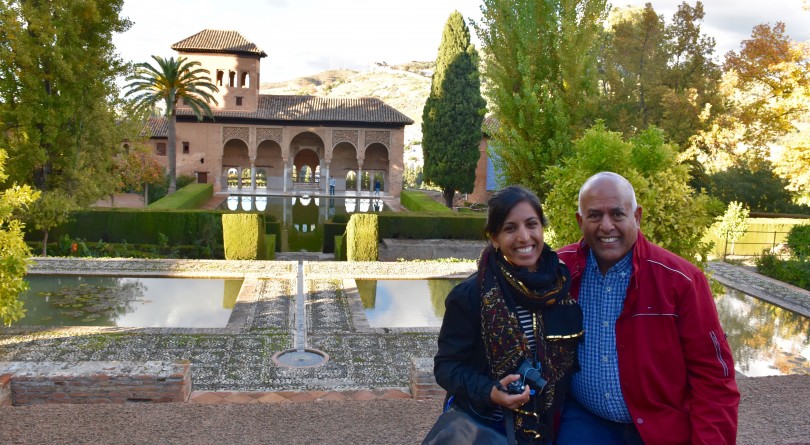 After Mum died three years ago—each of us sitting on either side of her bed, holding her hand as we watched her fade away—you pulled me into a bear hug and you told me: “It’s just you and me now, bud.”

Those words have stayed with me as the two of us navigated what we previously thought was impossible: living our lives without Mum. After all, whether she was planning an overly elaborate party or enduring yet another round of chemotherapy as the prognosis for her spreading ovarian cancer got bleaker and bleaker, she was the one who tied the two of us together, even in her final moments. So when she died, it was as if our tiny family came untethered.

We had to figure out how to work together as a family of two. We started by taking trips—first to India to release mum’s ashes into the Ganges, then through Spain. At first, we couldn’t carry on a full conversation; we were out of sync with each other, and we leaned on our new travel buddies to fill in the uncomfortable silences. But eventually we started talking to each other and getting to know each other all over again. After quitting my job to give me freedom to figure out my grief, I got a new job; you went back to school for photography. You learned to buy the groceries and put out fresh sheets and towels when I came home to Ottawa for a visit, tasks that Mum used to handle; I learned to be more patient with you and to stop expecting you to be both of my parents. Within months, we started talking more—not just delivering the news bulletins about our lives, but actually talking, the way we both used to with her.

The only thing we didn’t talk about was what would happen if you met someone new.

The one time it came up, it was a disaster. It was only a few months after Mum’s funeral, and we were finally getting around to framing and hanging some old family snapshots and what were now our final photos together—a task we had started before her last visit to the hospital. While you hammered hooks into the wall along the stairs, I opened your computer to play some background music, and that’s when the alert popped up: a new email from Match.com.

“Are you on a dating site?” I asked, hoping it was some kind of spam.

“I need someone new to talk to. I’m lonely. I’ve never really dated before.”

But in that moment, all I could hear was that before our photo wall was even finished, you were thinking of recasting our family. I just stared at the floor and blurted out: “How could you possibly think this was okay?” You came down the stairs and hugged me, promising that you would get off the site.

After all our hard work, introducing someone new into our family was more than my mind or heart could process. A therapist would later tell me that it’s not unusual for men to start dating soon after losing a spouse, but my mind was filled with questions: how would that work? Would we have to take down some of our family photos if a new person entered our lives? Could we still visit Mum’s family? Would I no longer be an only child? In the three years that followed, I never stopped thinking about it—but it felt too awkward, complicated and likely painful to bring up again.

But as time passed, my need to preserve our family changed. Our smaller unit became strong and happy again—and so did you. I’ve watched you become more independent and outgoing, hosting block parties, cooking spicy pasta dinners for our friends and volunteering at local events “just for the heck of it.” You graduated from photography school, and you began exploring the city and meeting new people through your camera. I was always proud to have you as my dad, but the way you handled losing your wife—by creating a life of your own—made you easy to brag about.

Then, during one of your recent visits to Toronto, you told me you were still lonely. This time, I pressed a little: I asked whether you felt that way while travelling, or while at the movies. “No, it’s the smaller moments,” you explained to me. “Like when I see a pretty flower, I don’t have someone to share that with.”

Maybe it’s because I’m older now, or because over the past few years we’ve become more empathetic toward each other, but this time, I actually heard you. It broke my heart. You built a life with Mum, and all of a sudden that was taken away. It’s not fair, but neither is expecting you to spend the rest of your life alone.

Dad: when I saw that notification from the online dating site, I panicked. I wasn’t thinking about you, or what you were trying to tell me, and for that, I’m really sorry. I told you then that it all felt like it was too soon. But it’s not too late to find happiness with someone new—to find someone who will appreciate the flowers with you.

I know more than ever that it’s just you and me now, bud. But I need you to know: it’s okay if that changes.