A father's letter to his kids: 'You are why everything is not lost'

Before You Go: Edward Piva, a teacher and father of two, on his kids' curiosity, their own path to reconciliation and Gord Downie's enduring lessons for Canadians 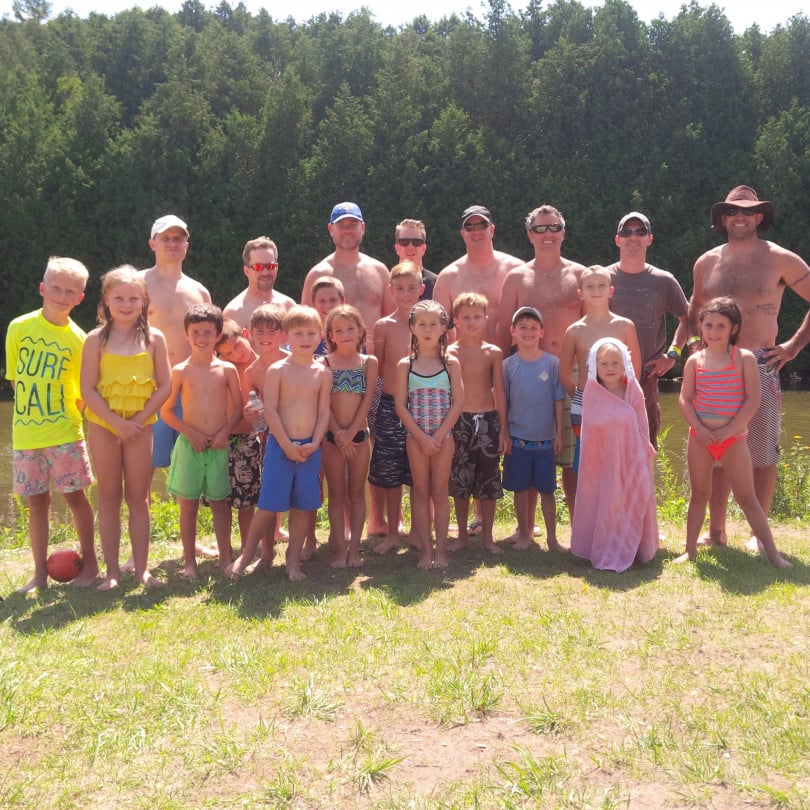 It was August 20, 2016, and in Kingston, when Gord Downie took the stage with The Tragically Hip for the very last time. A cedar grove camp site nestled in the woods was the temporary home of eight dads and 16 children who watched the concert from an iPad propped on a makeshift shelf. Our spirits found warmth in the campfire crackling at our backs. The stillness of a late summer night bestowed upon us a sense of calm as everyone found their place. There you were, my own children, Aislyn and Nate. Ethan, Ashton, Reiley, Brynn, Mason, Payton, Noah, Finley, Wyatt, Olivia, Matthew, Joel, Aiden and Liam, you were there too, with your dads. Bundles of boundless energy buzzing around like fireflies in the night, peppering us with questions: Who is that guy? Why is he singing? What did he say?

Your pure curiosity was the sorcery that made that night even more magical. Your questions cut to the core of my work as a teacher. Not long ago, The Perimeter Institute of Quantum Physics in Waterloo was where I helped develop a resource that made complex science simple, alongside adults who were just as curious as you. “Why is it like that?” was the core question for one of the activities. A physicist suggested that we explore oddities in nature through this question, providing the inquiring minds of students with nothing more than this question, an image and a fact. The need to know was the driving force for discovery. And not long after, I found my four-year-old son looking at an old salt and pepper shaker box from our year teaching abroad in Qatar, slightly discoloured and disfigured from our travels. “Why is it like that?” he asked. It’s a wonderful query: an open-ended inquiry that initiates the process of learning something new and getting closer to the truth. That question has been my north star in my teaching ever since.

READ MORE: The gift of Gord Downie: ‘He gave everything he had to this world’

That warm August night, Downie asked us to look that way, too. He dominated the stage, staring death in the face with art. He reached out and touched our hearts with a passion filled plea to look North, urging the 25 million Canadians watching across the country—Prime Minister Justin Trudeau among them, in Kingston—to start our own journeys toward answering difficult questions.

I didn’t have a clue what he was speaking about, but my curiosity got the better of me as it usually does. I wanted answers and I needed them fast. My response to his call to action began with a picture book. Before he died, Downie and illustrator Jeff Lemire produced The Secret Path, an album and graphic novel that tells the story of Chanie Wenjack, a 12-year-old Anishinaabe boy from Marten Falls First Nation. He died on Oct. 22, 1966 while attempting to walk home over 600 kilometres along a remote set of railroad tracks, his tragic attempt to escape the vices of Cecilia Jeffrey Indian Residential School in Northern Ontario. We read and listened to the music together, my children, and when we did, you watched as I cried—something Chanie likely never got to experience. That precious moment is the precise beginning of my own secret path toward truth and reconciliation.

And there are more moments. In October of 2018 while on my way to work, a mob of Ravens blocked the country road that I have travelled many times over my 14-year career. I came to a full stop. As I crept forward, they slowly walked to the edge of the road and we glanced at each other. I have never looked a Raven in the eye until that day, and since then, they have always taken flight. Later that morning, as I prepared for outdoor supervision, more than 90 students exited the senior hall door for recess. I was the last to leave and there at my feet lay a midnight black feather. I picked it up, my soul shivered; I carried it with me and I wondered. Questioning it all. What does it mean to find a Raven’s feather? Light, transformation, knowledge, creation and change. That precious feather has been with me ever since.

Others, of course, had long been on this road already. Thousands of residential school survivors bravely shared their stories with Canada’s Truth and Reconciliation Commission, and those harrowing tales produced 94 calls to action, including reforming how the history of residential schools are taught. This past July, educators and 49 First Nations communities across Northern Ontario were assembled, ready to develop one. But the program to update provincial curriculum documents with Indigenous content never really launched. And when the Ontario Progressive Conservatives took power in the province, the government cancelled the project altogether.

It was a devastating decision, deepening the fractures in the fragile relations with Indigenous people. But as long as we keep teaching—and learning—all is not lost.

As an educator, I recognize that the curriculum is only a teaching practice guide, and my professional judgment ultimately determines what I teach. The Ontario language strand for reading in grade 8 states that a student should be able to “demonstrate an understanding of increasingly complex text and difficult texts by summarizing important ideas and explaining how the details support the main idea.” The Secret Path is now a formal unit in my Grade 8 Language class at Linwood Public School. And as a woodworker, I’ve also created many wood art pieces including the iconic fedora, with proceeds benefitting the Gord Downie and Chanie Wenjack Fund. This creative process is the expressive outlet of my need to “do something” and inspire change.

All because Gord Downie asked us to consider the question that came so naturally to you, my children, on that star-filled night where a country sang in unity about seeing the constellations reveal themselves, winking into our vision one at a time like an awakening mind: Why is it like that?

You are why everything is not lost. No decision can drain your innate curiosity, and as long as I am your father—your teacher—I will do all I can to nourish it. We have shared tears and told stories and gone to smudging ceremonies and, when the temperature suddenly dipped, knew that Gord and Chanie were there, making themselves known. That work is only just beginning.

I know myself that there will be many small steps made on each one of our own secret paths, the one that nobody knows, except you. But keep walking, and asking—and only then will you know why it is like that, and why others must ask the same question.

FILED UNDER: Before you go Editor's Picks Gord Downie reconciliation