A government called. Its centre is missing.

Andrew MacDougall: The Prime Minister's failed legal gambit demonstrates that no one in his office is thinking clearly. They need to change that, fast. 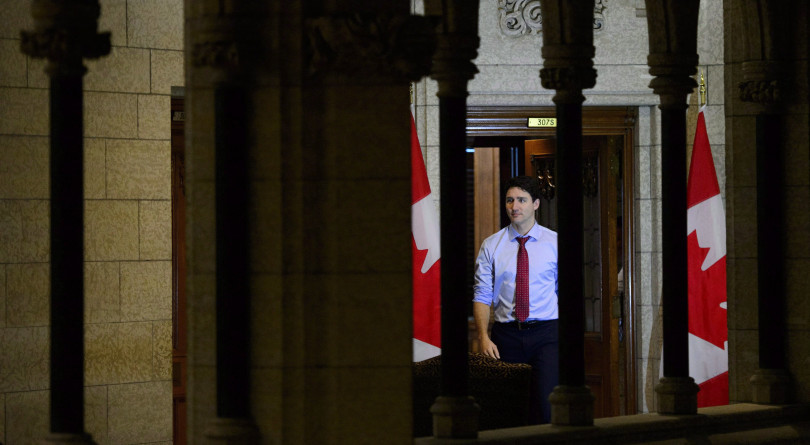 Trudeau makes his way from his office to take part in a year end interview with The Canadian Press on Parliament Hill in Ottawa on Friday, Dec. 14, 2018. (THE CANADIAN PRESS/Sean Kilpatrick)

It’s a phrase the late Johnnie Cochran might have deployed in the courtroom, and it’s one that should have been barked at Justin Trudeau before he sent a lawyer’s letter Andrew Scheer’s way for the latter’s “defamatory” criticisms on SNC-Lavalin.

But no one did. Or if somebody did speak up, that person was roundly ignored.

And so the stage was set for Trudeau’s limp legal arrow to be snatched out of mid-air by Scheer, turned around at a Sunday afternoon press conference, and stabbed into Trudeau’s backside, the latest act of self-harm in this apparently unending play.

It was as painful as it was predictable. There was no way Trudeau was ever going to follow through and endure the process of discovery on SNC. You don’t shut down two Parliamentary committees, sack two caucus members, and jettison your top two advisors because you’re eager to get to the bottom of something.

Even if Scheer has defamed Trudeau, he’s now called Trudeau’s bluff for all to see. If Trudeau is serious he needs to sue. Because I can guarantee you Scheer will be standing up every day to repeat his allegation, regardless of the limp attempt to chill. Knowing the Conservatives, they’ll soon have a website soliciting donations by tracking how many days it’s been since Trudeau issued his threat. It’s how they roll.

READ MORE: The one and only person to blame for the SNC-Lavalin scandal

What nobody can figure out at the minute is how the Prime Minister’s Office is rolling. It hasn’t really rolled since Gerry Butts’ head rolled in mid-February.

The PMO misjudged the will of Jody Wilson-Raybould. They underestimated the character of Jane Philpott. They trashed the brand they spent years building by savaging both off the record. They shut down legitimate enquiries. They even dragged an eminent jurist—Glenn Joyal—into the mud. And then came the silly call to serve the Leader of the Opposition.

What’s less clear is who is making the big calls?

And while the temptation is always to blame the help, the blame is usually more accurately directed toward the person at the top. Until you’ve been in a room with a prime minister—to say nothing of an angry or desperate one—you don’t know how hard it is to push back. The best hire a leader can make it someone who will challenge their bullshit. Trudeau needs that challenger now more than ever.

It certainly wouldn’t have taken much of a B.S. detector to predict the libel gambit would fail:

PMO: “Are you willing to disclose everything about SNC and testify under oath?”

PMO: “We can. And then Scheer will say ‘bring it on’ and call you a giant wuss for not acting.”

Because—and despite all outward appearances—there is still time and the Prime Minister is not without his powers. The entire resource of government is there to be deployed at his command.

And if white nationalism is your thing, haul in the tech companies and get them to do a better job of policing their hate-filled platforms. Leave the podium the next time some white nationalist yobbos try to interrupt your press conference and give them a telling off. While you’re at it, pick fights with Ezra Levant and Maxime Bernier and try to get Scheer caught in the crossfire. Announce a record investment in mosque security and hug every imam you can find from Newfoundland to the Yukon.

But for God’s sake man, don’t send legal letters when you have no intention of following through. Don’t try to sell your dead parrot of a budget from behind a podium with journalists firing SNC bullets your way. And don’t think you can continue to bully or bluff your way through this scandal.

Instead, try going to the National Press Theatre and saying you’re sorry for everything and announce the government will not be offering a deferred prosecution agreement to SNC-Lavalin.