A leaders debate for our messy politics

Stephen Maher: Too many people making too many points, at the same time, in short bursts. It was a good picture of the range of opinion in the Internet era. 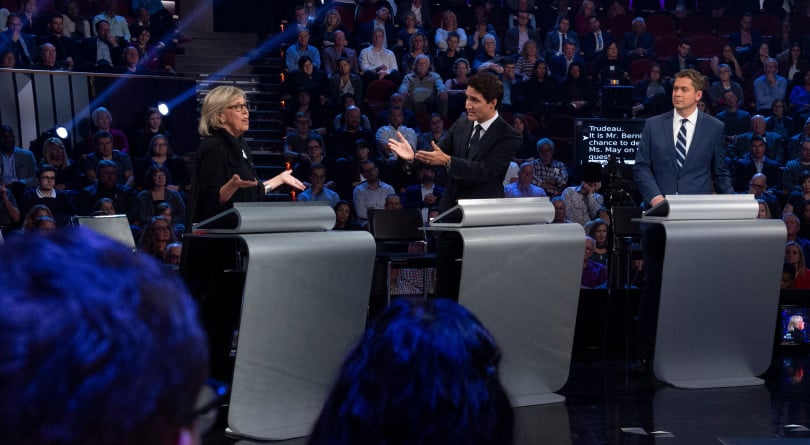 May and Trudeau discuss climate change while Scheer looks on, at the Federal Leaders Debate on Oct. 7, 2019 (Sean Kilpatrick/ AFP/Getty Images)

Watching the 2019 leaders debate was like filling your plate at a buffet with too many different kinds of dishes on offer.

You take a little of the vindaloo, a slice of ham, a little chana masala, some tuna salad, some smoked salmon, a piece of tourtiere, a few eggrolls, and end up with a plate filled with a bit of this and a bit of that, each item appealing in its way, but when you finish, you haven’t had enough of anything to be sure what to think of it.

For two hours, in the only English language debate that Justin Trudeau agreed to show up for in this election, with millions of Canadians watching, the six leaders spewed out talking points, talked over one another, delivered canned lines and did their best to win over the poor, confused people watching from home.

The comparison with the French-language debate on TVA last week, which featured four leaders, and the Maclean’s debate, which featured just three, was striking. Those debates, with segments where two leaders exchanged ideas, allowed for deeper and more meaningful exchanges.

To be fair to the consortium of media outlets who organized this, it is kind of tough to organize an appealing buffet if the hotel managers insist that it must represent many different cuisines and cooking styles. It was the commission that decided that six leaders should be given the opportunity to speak to Canadians, and I don’t think the commission had much choice. There are six parties running in this election.

In a sense, the debate gave an accurate picture of the range of opinion in the Internet era, where people curate their own media diet in a way that was impossible 20 years ago, when most people got their news from a handful of TV broadcasts and newspapers that mostly took a similar editorial approach to reporting on events.

That world is gone, and voters are increasingly able to get their information from sources that they choose themselves, which seems to be unravelling the traditional consensus-seeking patterns of Canadian politics, so that significant numbers of people want to vote for parties—like the Greens and the People’s Party—that were not electorally viable 20 years ago.

The wide range of opinions among the leaders made the debate hard to follow, which made me wonder how useful it was for those many voters who do not normally pay close attention to politics but tune in to watch a debate out of a sense of duty once every four years. I fear they will leave the experience like customers leaving a badly designed buffet, not sure what they just had for dinner, with sore tummies.

In the debates of the past, voters could get the main idea, for example, that one leader was in favour of free trade with the United States and two others were opposed. In this debate, voters must have had a hard time getting those kinds of impressions, policy-wise, because there were too many people making too many points, at the same time, in very short bursts, mischaracterizing one another’s positions in time-honoured but misleading ways, so that the poor voters must have had a hard time who was against abortion, for pollution or for or against a Quebec law that bans religious garb in workplaces.

The one exception to the confusion was the environment, rightly, because it ought to be the most important issue in this election, given what we know about the state of the world and the impact changes will have on our economy. On this, as on many issues, Justin Trudeau was on his back foot, being attacked from right and left, which left him repeating canned lines about his government’s record.

Goodness knows how any of that will move votes, but at least voters will come away with the impression that Andrew Scheer is keen on pipelines—though not as keen as Maxime Bernier—and Elizabeth May and Jagmeet Singh don’t like them, and are disappointed that Trudeau bought one.

If there were huge vote-shifting moments they escaped my notice, which would not be the first time. Often, the key moments in debates only become clear after a day or two, when journalists realize what has resonated with voters. If I had to score the debate, I would have Singh well ahead on points. The rookie New Democrat leader has been having a good campaign, in the sense that he is exceeding low expectations, showing a bit of personality, and representing diversity in a way that is meaningful for both new and old Canadians.

He performed much more effectively in this debate than he did in the previous ones, partly because he was free to attack Trudeau in a way that he couldn’t in the French-language debate, where his first priority was introducing himself to Quebecers.

Over and over again, he accused Trudeau of looking after the corporate elite and neglecting the needs of ordinary people, effectively delivering a message that has historically connected with some traditional NDP voters who, polls show, are planning to vote Liberal in this election. Trudeau has to hope that those voters don’t change their mind after this debate.

Like Singh, Scheer had a good night, showing more fire than he did in the two earlier debates, where he often seemed emotionally flat. And with Singh attacking Trudeau, as he did not in French, Scheer was able to use his time to repeatedly go after Trudeau hard, calling him a big phoney. He had the funniest line of the night, poking at Trudeau for repeatedly dragging Doug Ford into the race.

Scheer also looked comfortable parrying attacks from Maxime Bernier, who needed to bring some fire to win support for his fledgling populist party. He did not connect with effective attacks on Scheer as a hypocritical crypto-liberal, jumping in to attack all the other leaders as impractical socialists and globalists, which seemed unwise, since he is unlikely to win over Green or NDP supporters. And when Bernier rounded on him, Scheer gave as good as he got, pointing out that Bernier has changed his tune since they were rivals for the leadership that Scheer now holds.

That doesn’t mean, though, that Bernier won’t benefit from the debate. On immigration, he stood alone, arguing that we are letting in too many newcomers. Polls show a significant number of Conservatives agree, so it’s possible that some of them will like what they heard, in which case Scheer will have a problem.

So far, polls show there has been little movement between Liberals and Conservatives in this campaign, the result of a seemingly stable, entrenched divide between the two parties. What movement has happened has been on the left, where voters seem to be weighing their options.

In the confusing and cacophonous debate, voters who might not have known much about some of their alternatives got a better look at Bernier and Singh. If they like what they saw, it could change the dynamic of an election that has so far been static.