A letter to a friend of 40 years: 'I am a better person for having met you'

Laura Millar—nervous and new to town—met Jane Alban in high school. Decades later, she thanks her for that first kindness—and for everything else 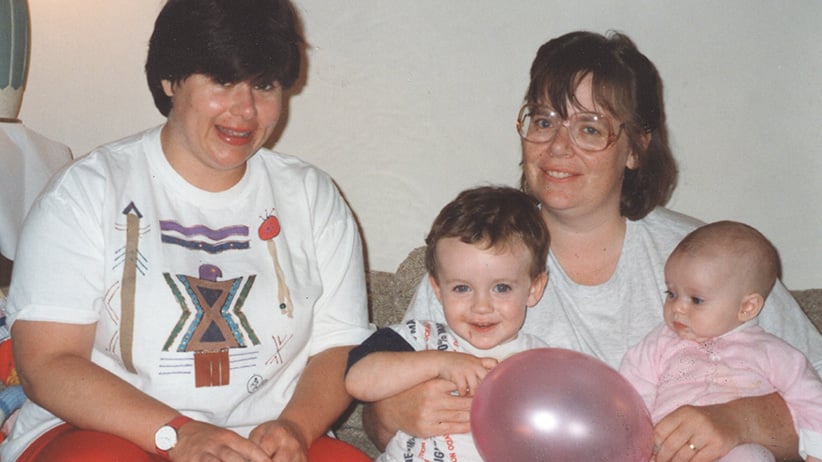 The author Laura, left, with her friend Jane, right, holding her children John and Victoria in 1994. (Photograph by Laura Millar)

To my friend Jane,

We laugh about my bad memory, don’t we? But I remember clearly the day I met you.

I was an overweight, spotty, frightened 14-year-old, standing against a wall near the playing fields at lunchtime that September day in 1974. It was my first week at Hillside Secondary School, in West Vancouver, B.C. My parents had separated the year before and were in the throes of a hostile divorce; my older brothers had already escaped from home. My father, not wanting my mother to get custody of my younger brother and me, packed us up, leaving everything behind in Connecticut but a few pieces of furniture and our two cats. We drove from the United States to Canada, to Vancouver, the city of my father’s youth, in search of a new life.

As a child, I had changed homes and schools and cities more times than I could remember. Every friend I had made had disappeared—or rather, technically, I had disappeared; my family kept moving, again and again, thinking that a new location might mean a fresh start. I had little hope for my time in Vancouver. I set my expectations as low as possible, aiming only for high-school graduation before embarking on my own new life.

But that September day, as I surveyed the crowd of teenagers—my stomach churning with fear as I prayed for invisibility—you walked up to me. You smiled at me. And you said: “Hi there. You’re new here, aren’t you? I’m Jane.”

You asked me where I had come from and why I was in Vancouver. I had practiced that response already: east coast, parents separated, father wanted to come “home.” No mention of the midnight screaming matches, the perpetual moves, the fact that for me, Vancouver was no more “home” than anywhere else. But you didn’t ask for details. Instead, you asked me where I lived, and did I take the bus to school, and did I have any siblings. In response, you said that you lived a few miles away, that sometimes your mother drove you, and that you had a little brother about the same age as mine.

Then, as the bell rang to return to class, you asked, “Would you like to come to my house for tea one day?” Sure, I replied, not believing that would come to pass. If it did, fine, but even then it wouldn’t amount to much; I probably wasn’t going to stay here any longer than anywhere else.

But a week later, you did invite me over. I remember walking through the front door of your house. It was a beautiful house, a proper house, a house that encircled a family: mother and father and sister and brother. It was a house with a living room and dining room, with proper furniture, with curtains and carpets and children’s artwork on the fridge. It was a home.

You introduced me to your mother, who shook my hand, making me feel grown up. Your brother leaned against the wall, grunted hello, and asked if he could go play. “Little brothers,” you sighed, eyeing me as if we shared a secret. Your mother settled us in the sitting room and brought us tea, in china cups, along with cookies and cakes. The two of you had made them last weekend, she said. Like mothers and daughters do.

After my visit that afternoon, you invited me back again. You introduced me to your friends: Kate and Lynn and June, and Jeff and Michael and Jay. I became part of your circle: not a clique or a gang—not snobby at all—but a group of friends. I began to think that perhaps it was worth investing in these friendships, giving a bit of myself to you and them. I let down some of my defences, shedding some of the dread I had carried for so long.

This past October, you and I had brunch together at a Vancouver restaurant, the day after our 40-year high-school reunion. We were joined by my husband Brian and two of those high-school friends, Michael and Jay. Jay has been your husband for nearly 30 years now; you have two remarkable children, adults themselves now. Your parents still live in the same house. We met for tea there this summer, when you were in town.

The reunion was nice, but it wasn’t necessary for us. We have never lost touch. I was in the church when you and Jay got married. I held your son when he was a few days old. You comforted me during the collapse of my first marriage and cheered me on when I dared to try again. I reassured you when your parents were ill; you consoled me when my father died. We laughed over the antics of our cats and gossiped (gently) about our friends, sharing everything from favourite recipes to retirement dreams. Ironically, you haven’t lived in British Columbia for decades, while I have been in the same Sunshine Coast house now—my home—for more than 20 years. We went in separate directions, but neither one of us disappeared.

As a friend, you have been stable and consistent and generous and loyal. You have always been there for me, wherever we both were. You opened the door to other dear friendships that persist to this day. By your grace and kindness, you remind me every day of your first lessons: that it is worth investing in people. That friends don’t have to disappear, as they had in my childhood. That valuable relationships should be nurtured and cherished.

You are my oldest friend. (And, as I love to remind you, you are four weeks older.) I hope and expect that we will be friends until we die. I am a better person, and certainly a happier one, for having met you.

I do have a bad memory, perhaps because there is so much I prefer to forget. But I shall always remember that my life is richer because you made an effort. Because you came to me that day at school, 40 years ago, and said, “Hi there. You’re new here, aren’t you? I’m Jane.”