A NATO ally is hurtling toward crisis. Should we care?

Adnan R. Khan: After its flirtations with Russia, Turkey now faces a foreign policy disaster in Syria. Can anything be done to save it? 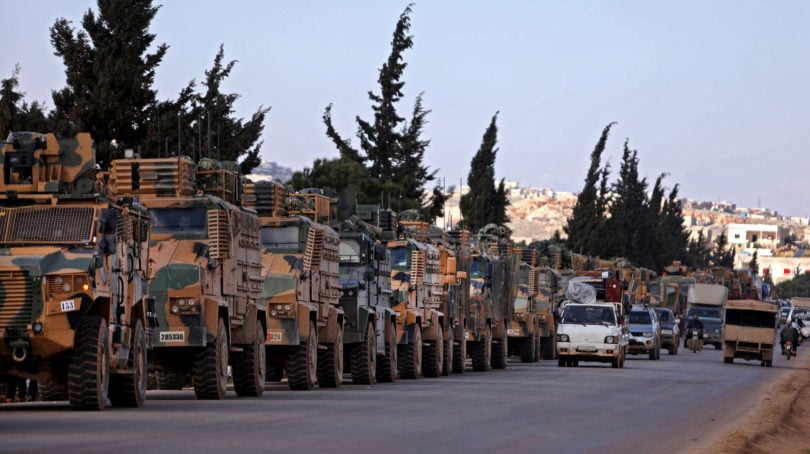 A Turkish military convoy parks near the town of Batabu on the highway linking Idlib to the Syrian border crossing with Turkey, on March 2, 2020 (Aaref Watad/AFP/Getty Images)

It took nearly a decade but Turkey’s foreign policy in the Middle East is finally coming crashing down around it. Many observers may see this as the comeuppance Turkey’s leaders so richly deserve. Under president Recep Tayyip Erdogan, our NATO ally has been less a mature member of the world’s most successful security alliance and more angry, vindictive teenager. The calamity Turkey now faces is of its own making, so let it fend for itself, the argument goes.

But here’s the problem: what happens to Turkey over the coming weeks and months will send dangerous ripple effects around the globe. It’s not simply the fact that Turkey is a NATO ally sliding toward war; it’s a key NATO ally that controls a strategic waterway (the Bosphorus and Dardanelles straits), which Russia needs to pursue its own surging interests in the eastern Mediterranean.

Containing Russia means keeping Turkey in the western democratic sphere, and making sure it is stable. Western nations have come to its rescue before, precisely for those reasons. But the current crisis is the worst it has ever faced.

Let’s take a closer look at just how deep Turkey has stepped in its own foreign policy droppings (be warned, it’s not a pretty picture):

Turkey and Syria are now on the cusp of an all-out war over the last remaining Syrian territory still under rebel control, Idlib. The Syrian regime launched an offensive on the region nine months ago. Over the past three months, it has ratcheted up its attacks, backed by a relentless Russian air campaign, steadily pushing back the rebels, which are dominated by Hayat Tahrir al Sham, or HTS, the radical group with ties to al Qaeda.

READ MORE: The terrorists are winning the ‘War on Terror’

In the process, Syrian forces have surrounded 12 Turkish military observation posts that were erected around Idlib to enforce the 2018 Sochi Agreement signed between Turkey and Russia. That agreement ostensibly turned Idlib into a de-militarized zone where rebel fighters, including those backed by Turkey, were transferred after the regime began taking back control of Syria. Even ISIS fighters reportedly escaped into the region during their last stand in the eastern Euphrates Valley last spring.

The violation of the Sochi Agreement has taken the Turks by surprise, though Russia argues the fault lies with Turkey. Under that agreement, Turkey was supposed to disarm radical groups like HTS, or at least separate them from more moderate factions, leaving the “terrorists” exposed to attacks by the Russian-backed regime.

From the beginning there were doubts that Turkey would ever be able to convince the HTS to put down its arms, or sift through the tens of thousands of rebel fighters in the region to extract those Russia and the Syrian regime would consider “moderate.” Even if that were possible, questions were raised over what Turkey would then do with them. Send them to the “safe zone” it was planning to set up in northern Syria along its border? What would happen to them from there? And what would happen to the estimated three million civilians living in Idlib? Would they be transferred, too?

It was a policy that was destined to fail, and it has now failed. In the process, Turkish forces deployed in Idlib are now surrounded by the regime and have on occasion come under attack. Meanwhile, nearly a million displaced civilians have amassed at the Turkish border, where facilities are so stretched that children are dying from hypothermia.

On Feb. 27, the tension reached new heights after a Russian news network claimed a video emerged of someone—either Turkish military specialists or rebel fighters trained by them—firing an anti-aircraft missile, likely provided by Turkey, at Russian warplanes, narrowly missing their target. Not long after, Turkish forces were hit by an airstrike, killing 33 soldiers.

Russian authorities denied responsibility for that attack but the escalation has raised the spectre of a broader regional conflict. With Erdogan’s domestic political fortunes on the wane, and Turkey’s economy persistently on the verge of collapse, the Turkish president has, characteristically, dug in his heels. Turkey has refused to withdraw its forces, a move that would be interpreted as a defeat by Erdogan’s nationalist constituency, and has demanded the regime retreat to the lines set out by the Sochi agreement. The regime has refused, pushing ahead with its brutal offensive.

Emergency talks between Russia and Turkey appear to be going nowhere and recent moves by the Turks lay bare the growing sense of urgency in Ankara. On Feb. 20, Turkey asked the U.S. to deploy Patriot anti-aircraft batteries near the Syrian border, to both deter regime and Russian bombing campaigns as well as provide cover for Turkish warplanes. The U.S. refused.

The request was steeped in irony: In 2017, Turkey signed a deal with Russia to purchase its S-400 missile defence systems, angering both the U.S. and NATO. The Americans claim the Russian system will threaten the stealth capabilities of the F-35 fighter jet, while NATO has said the S-400 is incompatible with the alliance’s existing hardware.

In recent weeks, Turkey’s rhetoric vis-à-vis NATO has also softened in an apparent attempt to urge the alliance to come to its rescue, culminating in Turkey’s invocation of Article 4 of the treaty. In an emergency meeting on Feb. 28, Turkey made its case to NATO ambassadors but they refused Turkey’s key demand—a no-fly zone over Idlib.

In a final act of desperation, Turkey followed through on its threat to open its borders to allow refugees to flow into Europe, violating a deal it had signed with the European Union in 2016. Within hours, busloads of refugees who have languished in Turkey for years began flooding Turkey’s border with Greece and Bulgaria.

As of writing, they are still arriving while Greek and Bulgarian authorities are refusing to let them in. According to one Bulgarian official, requesting anonymity, plans are being drawn up to beef up border police, including a possible military deployment.

The question is: How did Turkey fail to understand what it was getting itself into when it began interfering in the Middle East and courting Russia? Erdogan was an early convert to the idea that the emerging new world order will be less about deeply-rooted alliances and more about transactional relationships. In an attempt to muscle Turkey onto the international stage—when it was not ready—he began dissing its traditional allies in Europe and taking a confrontational stance with the U.S.

But now, when the going is tough, the reality is dawning that without those allies, Turkey lacks the international heft to make Russia bend to its will. In Putin’s transactional calculus, Turkey has a lot more to lose and will likely have to agree to ceasefire terms preferable to Russian interests. Unless, of course, Erdogan goes all-out rogue and decides to go to war with Russia, too.

That possibility still exists, and the consequences are something I’m not ready to entertain.