A pandemic-era economic and fiscal snapshot or patting their own backs?

Marie-Danielle Smith: Though much of Canadian society has struggled financially during COVID-19, we have assurances that more money is 'in the pockets' of Canadians because of Liberal policies 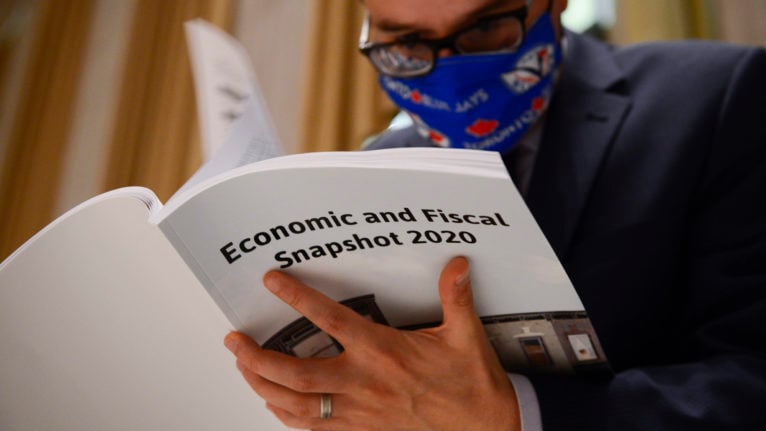 A copy of the federal government's Economic and Fiscal Snapshot 2020 is thumbed through as reporters take part in a media lock-up for the in Ottawa on Jul. 8, 2020. (Sean Kilpatrick/CP)

If they want to learn anything about Canada in 2020, future citizens—assuming humanity survives this year’s trials—could do well to scroll through the document Canada’s government published on Wednesday.

The “economic and fiscal snapshot,” 168 pages long and well over the 1,000 words a picture is worth, is not a simple financial update. While it offers a clear wake-up call on the current recession, it is also pleased enough with itself to give Liberal partisans plenty of hopeful talking points about their good work weathering the storm.

Sure, its pages contain all of the bar graphs, line charts and fiscal information a person needs to grasp the seriousness of the shock brought on by this year’s coronavirus pandemic. Some of those tables will bulge eyeballs. A $343 billion deficit is nothing to sniff at. A refusal to forecast beyond the end of the current financial year is alarming not just for predicting economic conditions but because it betrays serious fear about a resurgence of the virus.

MORE: There’s no putting a shine on Canada’s fiscal picture

But the document is more than all that. It captures a wealth of other social and political information specific to this time and place, informed in curious ways by the government that produced it. When professors teach “COVID-19 101” or “The Legacy of Prime Minister Justin Trudeau,” this document should be required reading.

Because, first of all, when does something akin to a federal budget include statistics on how many Canadians are playing video games?

That detail is couched in the snapshot’s extensive Gender-Based Analysis Plus (GBA+) analyses. The presence of GBA+, which the Trudeau government introduced as a way to see how government spending affects vulnerable groups (and, presumably, to congratulate itself on the same), is already interesting. That it captured so much data, including people’s hobbies, is somewhat surprising.

We learn that 59 per cent of Canadians have been watching more TV, 69 per cent have spent more time online, 35 per cent have eaten “more unhealthy foods” and 26 per cent are playing more video games since the beginning of the pandemic.

You might have expected such analyses to focus on details on how women, youth, seniors, and visible minority groups are faring during the pandemic. Those details are included throughout the document. Low-wage workers, youth and recent immigrants have borne the brunt of job losses. Women with younger children have been disproportionately affected by layoffs and a reduction in work hours—a reflection of “unpaid care work in the home that is disproportionately carried out by women.”

We also find evidence in the document of other, widely-reported concerns about the pandemic for which the government clearly sympathizes but for which it does not have statistics or solutions beyond survey results. That, compared to percentages reaching the high 60s in 2018, only 48 per cent of Canadians report having “excellent or very good mental health.” And that there has been an increase, among women and especially among racialized women, in worry about in intimate partner violence.

This document was crafted in a year where civil uprisings over racism in the United States have spilled over into Canada and led to difficult scrutiny of our own institutions. So we also get, from a government so obviously keen to showcase its values, an admonishment of itself for not having adequate data about racialized Canadians.

“Although our data does not yet fully capture the unique experiences of racialized Canadians, we recognize that racialized people, including Black Canadians, are more likely to work frontline jobs, have lower incomes, have health disparities, and experience systemic discrimination, which compound economic hardships related to the pandemic,” the document says.

Survey results also address incidents of racism. We learn that seven per cent of respondents felt “harassment attacks based on race, ethnicity or skin colour” had increased in their neighbourhood since the pandemic began. The numbers were higher among young people (11 per cent), non-binary people (22 per cent) and people with visible minorities (18 per cent). Confirming reports that people with Chinese heritage have been the target of anger over a virus that originated in China, 30 per cent of self-identified Chinese felt the incidents had increased.

Future scholars will also find all the hallmarks of a Liberal government that has gotten used to framing massive deficits in happy terms, and that, even during a serious national crisis, has tried to maintain a positive political spin.

Although there is no happy stock image on the cover, we have the stories, featured throughout, of people such as “Anna” and “Sammy” who have benefited in various ways from government intervention. We have dire warnings: “In a global pandemic and economic downturn, if the government didn’t step in, families would have had to take on more debt or lose what they have worked their entire lives to achieve.” And, though much of society has gone cashless during this time, we have assurances that more money is “in the pockets” of Canadians because of Liberal policies.

There is much comparison to likeminded countries, perhaps a reaction to recent wounds—during the pandemic, Canada had its credit rating downgraded by a major rating agency, Fitch, and lost the election for a temporary seat on the United Nations Security Council.

But this document will assure you that Canada is doing better than elsewhere at managing COVID-19. Fiscal support measures represent around 10 per cent of Canada’s GDP, compared to other G7 countries, which represent closer to 6.7 per cent of their GDPs. Strangely, next to this assertion is a note of muted criticism on the United States, which imparts no data at all: “In comparison, the U.S. plan also devotes a large share of direct support to individuals and households but to a lesser extent than Canada.” And in the final section, on debt repayment, we see a chart showing that Canada still has a “low-debt advantage” in the G7.

In what is largely a regurgitation of already-announced funding measures and already-predicted fiscal realities, here we do not find an overwhelming array of new policies. We do not get a prediction of the economic realities of 2022—those, according to the report, could be “misleading.”

We do, however, get a “snapshot” of something else. Here, for posterity, is a look at how Canadians report themselves to be coping, and how broadly they have availed themselves of unprecedented government measures during an unprecedented crisis (and an unprecedented uptick in the use of “unprecedented” as an adjective—it appears 26 times in the snapshot).

Here is some insight into how Prime Minister Justin Trudeau, leading a Liberal minority government during an international crisis, is trying to position his government in the broader cultural conversation that is unfolding at the same time. And to whom his government especially wants to signal their support—even if that support isn’t yet backed by policy.

There’s a phrase in the snapshot that is too eerily definitive. The COVID-19 pandemic, it reads, is “the challenge of our generation.” That does not sound like hyperbole now. Hopefully it will not sound that way to the kids of 2050, either.