A politician to Paul Dewar: 'You know no one is strong enough to do it alone'

Paul Dewar took on fights in Parliament for nearly a decade. Now, as he faces a new one—brain cancer—Jeff Leiper shares what he's learned from his mentor 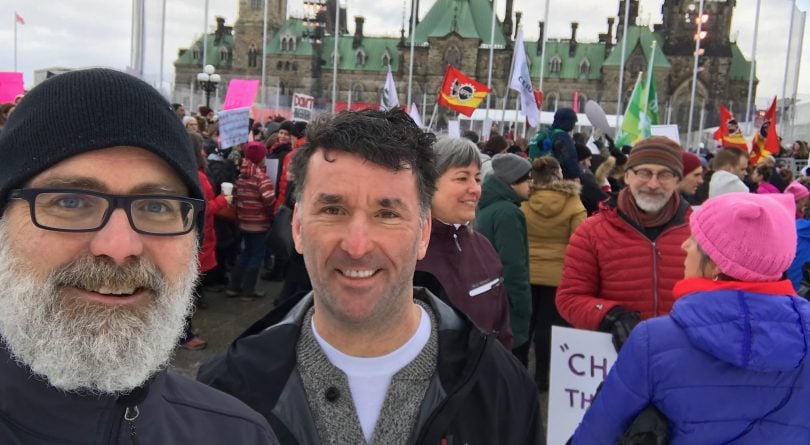 Jeff Leiper (left) and Paul Dewar (right) at the 2018 Women's March in Ottawa.

Update, Jun. 12, 2018: Paul Dewar told the Ottawa Citizen that his brain cancer is terminal. He has launched a youth initiative with Youth Action Now to “to support young people’s aspirations to think and act from where they sit.”

Jeff Leiper is the current Ottawa city councillor for the ward of Kitchissippi.

Can we talk about your jeans?

I’ve seen pictures online—a lot of pictures, in fact—that prove you’ve owned (or at least borrowed) a lot of suits over the years. As far as I can tell, you even own a decent collection of ties. For some reason, though, I have a hard time picturing you in one, since I can probably count on one hand the number of times I’ve seen you in an outfit that didn’t include a pair of jeans.

I have no doubt that you were wearing jeans when we first met, probably while you were running in 2005 to represent us in the federal riding of Ottawa Centre. Paulette Dozois, our very good friend and a veteran NDP campaigner, would have introduced us, I’m sure, probably at a community event.

When you became our member of Parliament in 2006, my near-downtown Hintonburg neighbourhood in Ottawa was experiencing challenges around drug houses and street prostitution. We needed allies. Though we live almost in the shadow of the Peace Tower, Parliament Hill seemed a world away. But the tone of our relationship with federal politics became more intimate and collaborative with you as our MP.

Your gift, Paul, is that you can put a room at ease. You can instantly bring to a meeting—of three people or 300—a sense of confidence, competence, collaboration and co-operation. With you, the barrier between the politician and the public disappears; you’re one of us, leading from beside us rather than out in front. In your jeans and with sleeves rolled up, you get to work with humility and humour. That’s got to be the teacher in you, but it’s also a testament to your true nature.

Over the years I’ve gotten to know you, you’ve become a model for me of authenticity in politics: a fellow fan of Bruce Springsteen, CFL ball and the outdoors, with a love of all things nerd and laser-focused on social justice. I always got the sense that you were comfortable in our neighbourhood. Like a pair of well-worn jeans, Hintonburg fits you.

I’m reminded of that when I think back to one particular year of the annual Hintonburg 5K race I organized to showcase our funky streets. You’ve been a fixture at that race, as has the friendly competition between you and our equally fast MPP, Yasir Naqvi (seriously: you two are fast). That hot July morning, a local group of—well, let’s just call them “motorcycle enthusiasts”—who had been partying through the night offered to supply runners with cold beer. I declined, but suggested they might put their clubhouse garden hose to good use to mist our runners with a cool spray.

I will never forget the twinkle in your eyes post-race as you described the reactions by some of our non-local runners to being misted by a patched-up One Percenter who was probably seven feet if he was an inch of denim and leather mayhem. “Welcome to Hintonburg,” you laughed. “I love this race.” You probably have no idea how much that meant to me. It was the most genuinely loving thing I’d ever heard someone say about what those of us in the community were working for.

Inspired by your lead, I ran and won a seat on Ottawa city council. You don’t need me to tell you that politics is a tough gig; neither of us likely set out in our careers to get elected to office. But there are things that are wrong with the world, and they need fixing. You’ve taught me that doing the right thing to fix those problems will sometimes be met with a swift backlash by those who don’t agree—and that’s okay.

Over the past three years, I’ve received quick text messages and phone calls and out-of-the-blue missives of encouragement from you. You may not know how much they mean to me, or how they boost me in low moments. Those quick notes to say “great interview” or “good job” after a tough committee meeting tell me that you care, that we’re working toward the same things, and that you know that no one is strong enough to do it alone.

And that’s the flip side of what you’ve taught me. Your gift is to lead us into a fight by fighting alongside us, and now—as you face a challenge like a diagnosis of brain cancer—you have to know that means we’re fighting alongside you, too. You’re not alone in this. Isn’t that the message you’ve been delivering your whole career?

Paul, of all the things I’ve learned from you, two things stand out. First, as I continue to learn how to do this gig, I aspire to your example of serving our community with a spirit of humility and co-operation. And the second: we can do that important work while being ourselves.

We can do it in jeans.

This essay is part of Maclean’s Before You Go series, which collects unique, heartfelt letters from Canadians taking the time to say “Thanks, I love you,” because we shouldn’t have to wait until it’s too late to tell loved ones how we really feel. If you would like to see your own letters or reflections published, send us an email here. For more details about how and what to submit, click here.