A walk down the Canada Food Guide Memory Lane

Tabatha Southey: There is no more significant a generational marker in Canada than which Food Guide your mother obligingly taped to the fridge and then largely ignored 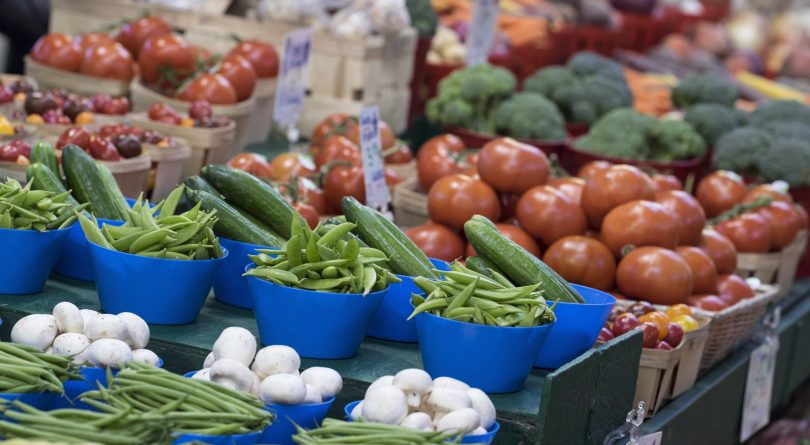 Vegetables at the Jean Talon Market in Montreal on Jan. 11, 2016. (THE CANADIAN PRESS/Paul Chiasson)

The government dropped its new Canada’s Food Guide this week, and of course there’s been a lot of talk about it. We Canadians treat a new Canada’s Food Guide like we’ve being served an actual meal. We look it over, pick it over, devour it and then critique it thoroughly as if we’re obliged to leave it a Yelp review. Sometimes we vow to make it at home, and then don’t.

We have come to relish a new food guide because with each food guide dawns a new era. There is no more significant a generational marker in this country than which Food Guide your mother obligingly taped to the fridge and then largely ignored, having internalized her own childhood Food Guide, thank you very much. If you grew-up in Canada, you matured alongside those guides—that tape’s yellowing a better marker of your years than the pencil lines, dates and ages marked on the door frame. That guide was your fridge’s screensaver and you liked it.

Canada’s Food Guide has always been a visual treat. Has food ever looked that happy? Canada may not be the most powerful nation on Earth, but we are the undisputed world leader in jaunty cartoon-recommended portions of whole grain bread. I look forward to the inevitable vintage Canada’s Food Guide hipster wallpaper. Invest now, people, this is going to be the next Mason jar. I love the look of the Food Guide, I love the intention behind the Food Guide, but mostly I love how a new Food Guide is like a colourful magic spinning wheel that takes me back to the past.

One look at a Food Guide, any Canada’s Food Guide, and all of a sudden it’s like I’m right back there in Grade 7 home economics, the class in which the guide was taught, rushed through, as I recall, in one cursory lesson alongside the correct order in which we were to wash the dishes.

Something about cutlery first, I think, I wasn’t paying attention. I live by one sacred rule in my house: if it doesn’t go in the dishwasher, it goes in the garbage.

We did not have a lot of time to spend on the food groups in that class as we were busily engaged in the task of learning to survive as housewives in the twisted dystopian future that our home ec teacher seemed to believe awaited us sometime in the late-nineties. She foresaw, as best I could tell, a time in which women would be called upon to whip up a festive “edible” Easter centrepiece in less than an hour with the ingredients they had on hand (icing sugar and food colouring, always icing sugar and food colouring) on pain of social humiliation.

This class could not have been more WASP. It was like our teacher had taken upon herself the arduous task of isolating WASP in its pure form. What she strove for, day after day—at grave risk to her health (icing sugar and food colouring, always icing sugar and food colouring)—was distilled WASP, WASP uncontaminated, as she clearly saw it, by any other elements of the complex blend with which she worked. She was the Marie Curie of WASP and we were her lab assistants.

We also learned to sew an apron, in case the snow was bad that winter and supplies from back east didn’t make it to the general store or something. Then we made a “disco purse.” We were covered for any eventuality except having actual jobs.

RELATED: Canada’s Food Guide: Ignoring it? Now’s the time to follow the rules.

Home economics was taught only to the girls. The boys were next door in shop class. Sometimes we were allowed to bake them cookies. I did try to take shop, by the way, mostly because I loved woodworking and hated my fingers, but on the first day I was told firmly and repeatedly by the shop teacher to “Get in the other line.”

I had a friend whose mother pushed the issue and got her into shop, and my friend told me that every time the shop teacher would say something like, “OK, I want you to make sure that joint is tight—I’d say ‘tight as a girl’s sweater’ but for present company.” Every day.

Such was the way of things for the Happy Lip-Licking Sun Surrounded By A Colourful Disc Made Up of the Four Food Groups Generation, oh Children of the Food Rainbow.

The very first Canadian food guide was no mere “guide;” those were the days of the 1942 Canada’s Official Food Rules. To this day, Canadian parents tell stories passed down through the generations of the dark times when we all lived in fear of being dragged from our homes by the Food Police and sent away for re-education (and “some CHEESE, as available”) for the crime of failing to follow-up our mandatory serving of whole-grain cereal with the proper four to six slices of “Canada Approved Bread.” We do not speak of what happened to those whose bread was not Canada Approved.

By 1944, the stark all-caps instructions to eat EGGS and been replaced with a jolly strutting egg and his equally merry food group friends. Still, while dietary tyranny had a friendlier face, it was not until 1961 that the Food Rules were relaxed into a Food Guide and our long national nightmare ended.

The big news in Canada Food Guide 2019 is that dairy is no longer in a category.

Dairy, once queen, has been cast in with the hoi polloi of all the other proteins and there has been some drama over this. Canada, always with the dairy drama. Also the guide suggests eating plant-based sources of protein more often than animal sources and more vegetable and fruits, and the tone has shifted too.

When Health Minister Ginette Petitpas Taylor unveiled the new guide, she spoke about how the idea behind the new Food Guide was that “eating should be a pleasure.” This guide is more about cooking your food then counting your food. “Grow, harvest, fish, hunt and prepare food in traditional ways” is the suggestion, and if you can’t do that, at least read the label.

Share “food traditions, across generations and cultures,” the guide says. I look forward to a still more intimate document, one ready to deliver the cold truths and the warm comforts, “Popcorn is not dinner” but also, “Grilled cheese is everything,” but I like what we’ve got here. It would be a bit of a throwback but this guide could almost be called Food RULES!