A writer to her dying sister: 'We tell ourselves lies to survive' 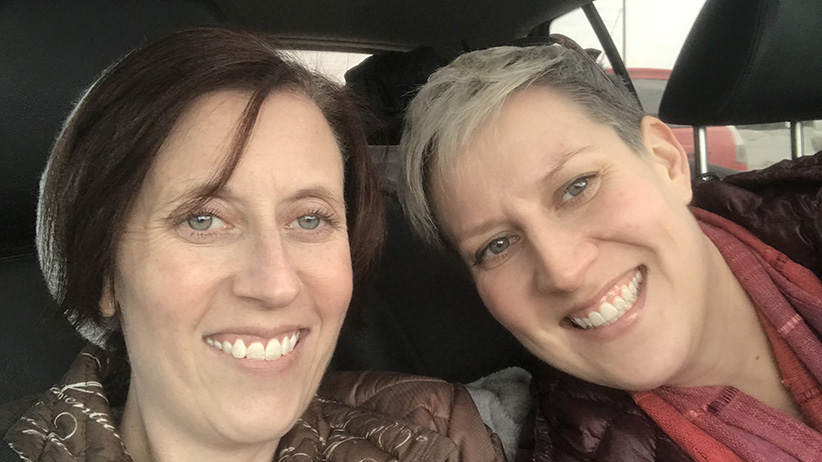 Kelly S. Thompson is a former captain in the Canadian Armed Forces who now lives as a writer and university instructor in Ontario.

Once upon a time, my family would sit around the Thompson dining-room table, and my sister Meghan and I would be “Bill’s Broads,” as my Dad liked to joke. We would roll our eyes at his lame anti-feminism and tell him about what all females—Meghan and me in particular—were capable of. And then we’d laugh. When we were younger, we laughed.

It took me five years to learn to set the dining-room table at my parent’s home for three, instead of the usual four. Eventually, it became easier to just pretend my sister Meghan didn’t exist than it was to admit that drugs, any number of them, had whisked her away to places we didn’t care to imagine.

Growing up, I wanted to be Meghan. As army brats who moved all the time, she made new friends easily because she exuded confidence and kindness; I, on the other hand, spent my childhood hiding behind my mom’s dress and worrying about how I’d ever get into university when I only got a B+ in grade eight phys ed. I would watch from the sidelines as my sister approached new kids and started up a game of tag, and without fail, Meghan would take my hand and bring me into the fold of friendship, protecting me from naysayers who didn’t want a bratty sibling tagging along.

And then there was the scar Meghan had, evidence of her childhood kidney cancer, splitting her open like a coconut from belly button to the back of her ribs. God, how I ached for that scar. It spoke of survival, toughness, determination—everything I didn’t have.

So I tried to be her—at least, until the edges of my sister’s personality disintegrated under layers of chemicals snorted up her nose or inhaled through a pipe through much of her twenties. I no longer ached for her scar; instead, I longed to forget.

Like most addicts, Meghan did bad things while feeding her addiction. She stole from our purses while we slept. There was lying—so much lying. Doors were slammed. Hateful words were spewed. Items were shattered against the stencilled fruit border that lined the kitchen. This tiny, five-foot-tall woman terrified me, even though I towered over her by six inches.

My response, like most young people who don’t understand the disease and power of addiction, was to be angry. I essentially cut my sister out of my life—tired of the late-night phone calls that were slurred to the point of incomprehension, or the missed birthdays where I would blow out candles on my cake and lick all the icing off by myself, trying so hard to pretend I didn’t miss her.

When we did connect, her shape passing like an unrecognizable ghost, I forced my arms to hang limp as she hugged me. There was, I thought, some decency I possessed in not telling her how she smelled like crack, or pointing out that I could see her collarbone now poking through her oversized sweatshirt. I had become a military officer, and I wanted Meghan to know what a success I was despite her lack of sisterly guidance. I’ll admit it: I wanted to rub it in her face, just a little.

But my sister has always been my biggest fan anyway. People say that all the time. But Meghan has championed every piece of writing I have ever produced, touting my first publication to her circle of friends like I’d just won a Pulitzer. “You’re going to be a famous writer some day,” she would say. “I just know it.”

“You don’t know anything,” I would snap. Because Meghan was a drug addict. Below me.

We tell ourselves lies to survive.

A few years ago, Meghan got clean with support from my parents and that same steely determination she’s had since we were kids. She made a family with a man she loves. She had a son. And then something happened; she apologized to me. No qualifier. No “but I was depressed.” No “but I was lonely.” No “but I had no self-esteem.” Just: sorry.

But last April, my sister gave birth to a premature baby girl. The next day, the six-pound tumour playing hide-and-seek behind her womb ruptured, spreading cancer throughout her abdomen. She has been diagnosed with Stage 4 sarcoma, which accounts for just 1 per cent of all cancers. She always did like to be different, but there is a cost. Meghan doesn’t have much longer to live.

Recently, I took Meghan to her first chemo session, because she asked me to. She said I’d make it fun. I made us matching T-shirts with profanity-filled quips about the determination of Thompson women to give cancer the big “F–k you.” I held her hand as the poison dripped into her body, as it will nearly every week until she dies.

Afterwards, I drove her home, spent of my assuaging humour but pent up with tears, knowing this was what she needed of me. But as she stood in her kitchen and put her arms around my waist, I squeezed back until my arms ached, hands rubbing up and down her spine, tears slipping into my sister’s hair. I hugged her tightly, regretting every single moment in which I let one of my sister’s hugs pass me by unreturned.

I kissed my niece and nephew goodbye, climbed into my car and sobbed, emotion cracking me open, just like a coconut. I’ve developed my own scar, this one from heart to mind and everywhere in between.

This is meant to be an essay to say the things I have not said to my loved one. But Meghan will not read anything here that she doesn’t already know. There is nothing to say to her that I haven’t said a million times already.

You are my best friend.

You may be my biggest fan—but Meghan, I’m yours.