After 48 hours of intrigue, Theresa May—and Brexit—sits on the knife's edge

Analysis: Internal Tory politics are playing out on a national stage, threatening the government—and, along with it, the entire delicate enterprise of Brexit 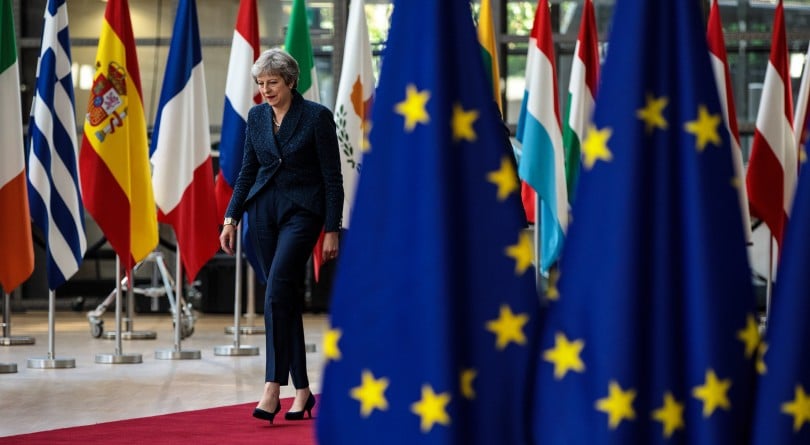 On Friday, U.K. Prime Minister Theresa May went to bed having secured a victory, of sorts, on Brexit. Just 48 hours later, it seems it will be many nights until she sleeps as soundly as she did that night—unless, that is, she is put to sleep by her party.

Rewind to July 5. Following an all-day meeting at Chequers, the prime minister’s country retreat, May finally succeeded in uniting her cabinet behind her preferred negotiating strategy for leaving the European Union, more than two years after the original vote to leave, and nearly 16 months after May’s government triggered the Article 50 negotiations to exit.

It was a big moment for a beleaguered prime minister, one whose prospects of success heading into the retreat were thought to be slim. All week, after all, Westminster had been agog with rumours of cabinet resignations. Foreign secretary Boris Johnson—an arch-Brexiter who has been a frequent and vocal thorn in May’s side—had even convened a meeting late on July 5 to rally his most rabidly pro-Brexit colleagues to oppose May’s new “common rulebook” proposal on Brexit, a third-way plan meant to sidestep the knotty problem of a hard border in Ireland by agreeing to the European Union’s rules on the trade of goods. The more caustic of the pro-Brexit British press had already branded May’s proposals “Brexit in name only,” given that it was nowhere near the full exit from the E.U.’s single market and customs union promised by the Tory manifesto.

Still, Johnson found no takers for his rebellion and, stripped of allies, the popular former mayor of London eventually signed onto May’s plan on Friday afternoon, branding it a “turd” in need of polishing.

Having cunningly taken all cell phones away during the retreat and then offering her ministers a sumptuous dinner to heal wounds and ease any bruised egos, May’s team then rushed to brief the media that the Prime Minister’s steel, absent since her brutal election humbling last summer, was now back in her spine. The message: the U.K. had its proposal and a reinvigorated leader, and the ball was now in Europe’s court to respond in a serious way.

READ MORE: The U.K. could use a ‘bloody difficult’ woman like Theresa May

On Sunday night, David Davis, May’s minister for exiting the European Union, went to 10 Downing to exit his union with his party’s cabinet, and by the time he left, shortly before midnight, the prime minister had another turd to polish. The subsequent resignation of Steve Baker, a junior minister in Davis’s department and an influential figure amongst pro-Brexit backbench MPs, suggested the turd was also rolling downhill at speed. Now, after the surprise resignation of Boris Johnson on Monday, the turd risks morphing into a pile of s–t capable of squelching May’s government.

The mood around Westminster is febrile, with the text of Davis’s scorching resignation letter doing little to lower the temperature. “The general direction of (Brexit) policy will leave us in at best a weak negotiating position,” he wrote, “and possibly an inescapable one.” May’s “common rulebook” plan, he added, “hands control of large swathes of our economy to the EU and is certainly not returning control of our laws in any real sense.” Davis concluded by suggesting May appoint an “enthusiastic believer in your approach, and not merely a reluctant conscript” to replace him. In other words: good luck to the next guy or gal.

When Brexit emerged as this government’s major file after a referendum delivered a narrow mandate to leave the EU, it was always going to be a difficult slog. But now, May is looking at a full-blown crisis of confidence that could threaten the entire project—not to mention her own government, which is now resting on the knife’s edge.

It’s not that Davis or Johnson or indeed any other cabinet minister were or are particularly essential to the Brexit negotiations. Indeed, one of Davis’s main complaints was that he had been frozen out of negotiations after May seconded Olly Robbins, the top bureaucrat at Davis’s department, over to the cabinet office to plot strategy directly with the team at Number 10. In particular, Davis had been stung by reporting showing he’d only met with Michel Barnier, his E.U. counterpart, for four hours this calendar year. For Johnson’s part, tangential is too generous a word to describe his contributions to the actual process of leaving Europe.

But May still needs a government and a party to lead if she is to deliver any form of Brexit to satisfy the referendum result. And she’s running out of runway for a deal in time for the official March 2019 date for Brexit, a target that now looks fanciful under any circumstance—especially after softening or rescinding many of her earlier “red lines” in the negotiations. She’s been made to look weak after resignations over her compromises, and she can’t regress into a Black Knight shorn of cabinet arms and legs and still carry the day.

Indeed, it’s the charge that May is now pursuing the bureaucrats’ preferred “soft” Brexit that rankles the Tory base most. For them, Brexit is being sabotaged by politicians who lack the guts to take on Brussels, and that it would be better to crash out of Europe with no deal rather than live on in some zombie state sharing some, but not all, of Europe’s rules. This view ignores the facts, of course—a point May made repeatedly during her cabinet retreat—including the reality that the British Parliament, in which the Conservatives alone don’t have a majority, does not support this hardest interpretation of exit.

But the facts won’t stop Brexit from devolving further into internecine fights and omnishambles, to the chagrin of the European Union. For their part, Barnier and key EU leaders like Germany’s Angela Merkel were cooly receptive of May’s “third way,” despite veteran E.U. watchers declaring them dead on arrival given their blatant cherry-picking on the question of the E.U.’s four indivisible freedoms of goods, services, capital, and persons—perhaps because it was at least a firm offer on the table subject to possible negotiation, which is exactly what the EU had long been asking for. EU leaders had in fact hoped to have a negotiated deal ready to present to its member states by November of this year.

If May can’t keep her government alive, the negotiation is moot. Another resignation of the Davis or Johnson magnitude would throw her ability to lead into terminal doubt. And if a thinning Cabinet doesn’t do May in, her own backbench could do her in too: the 60 backbenchers comprising the European Research Group—led by the immensely popular cult British hero Jacob Rees-Mogg, widely considered the hardest of the hard Brexiters—is resolutely opposed to May’s Breixt plan, which could lead to its defeat in the House of Commons. And furthermore, a number of letters from the backbench challenging May’s leadership have already been sent to the chairman of the Conservatives’ 1922 Committee; if that committee receives 48 letters, May will automatically face a leadership contest. It would leave the European Union with no one with whom to negotiate until the sure-to-be-nasty leadership machinations are sorted, even if Jeremy Corbyn’s opposition Labour party—now polling neck-and-neck with the Tories and similarly conflicted on Brexit—wins the day.

For her part, May has no choice but to press on with her third way. She is scheduled to present her plan to the House of Commons today before meeting with her full caucus and then formally presenting the offer to European negotiators.

But as go the palace intrigues of her intrigue-loving Conservative Party, so will go this country, right now. And the longer the country goes without a plan or a functioning government, the shorter the odds get that all Brits suffer a catastrophic exit.