After a period of high anxiety, it's time for patience on North Korea

Opinion: There's optimism around the Korean crisis—but we need a coherent, long-term strategy for diplomacy and engagement with North Korea 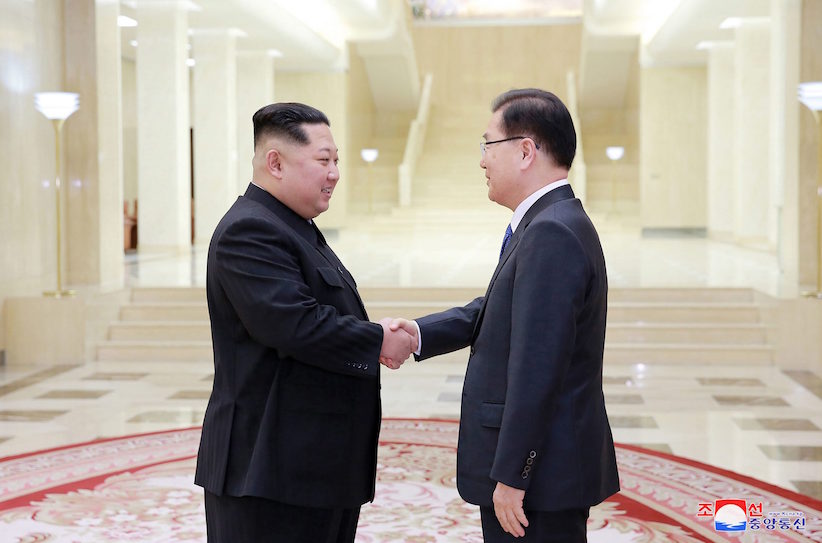 Just a few months ago, hope and optimism were in short supply on the Korean peninsula. Between North Korea’s nuclear and ballistic missile tests, ongoing bellicose threats exchanged between Pyongyang and Washington, and fears about potential military confrontations, South Korean President Moon Jae-In had to repeatedly assuage fears about the prospect of war. Still, it felt as if the doomsday clock was ticking faster than we could count.

Then, to everyone’s surprise, North Korea announced its willingness to bargain with Washington, and Kim Jong Un is now set to meet the U.S. President by May—who could have expected Donald Trump to be the first sitting American president to meet with the North Korean dictator?—signalling that North Korea might be willing to consider de-nuclearization as an option if sufficient security guarantees were provided, a remarkable change in position. Furthermore, Moon and Kim agreed to meet in late April in Panmunjom, at the border between the two Koreas, which would mark the first high-level summit to take place since 2007, as well as establishing a telephone hotline between Moon and Kim. Kim even acknowledged that he understood that the joint U.S.-R.O.K. military drills must continue as planned, and that he was willing to suspend his missile and nuclear tests if they were to go ahead with a dialogue with Washington. All of these developments, undoubtedly carefully planned by Pyongyang and championed by Seoul, point to a more hopeful future on the Korean peninsula, if all goes well.

What led to this surprising turn of events? The biggest credit should be given to South Korea’s sports diplomacy at the 2018 Pyeongchang Olympics. Dubbed the “Peace Olympics” by the host government, Pyeongchang welcomed more than 280 North Korean athletes and cheerleaders, as well as several high-ranking officials from Pyongyang. The beautiful—and highly indoctrinated—cheerleaders from North Korea not only received wide media exposure, they also engaged in frequent street performances, and even cheered for the South Korean athletes. The two Koreas marched together for the opening and closing ceremonies under a joint flag, and the two joined forces to form a women’s ice hockey team. The Winter Olympics also marked the debut of Kim Yo-Jong, the sister of the North Korean dictator, whose charm offensive gave a public face to the Hermit Kingdom. If the spirit of the Olympic Games is to bring people together from all nations regardless of their political and ideological differences, the biggest prize was found in the cautious steps toward reconciliation between the two Koreas.

READ MORE: Is Korean reunification in the cards? A special report from Korea

While it is easy to get excited about upcoming high-level summits, we must take time to recognize that there is no clear blueprint for de-nuclearizing North Korea and providing the security guarantees that the regime will ask for. Under presidents Kim Dae Jung and Roh Moo Hyun, previous South Korean administrations have tried to engage with North Korea through the Sunshine Policy and other conciliatory policies, and ultimately failed to convince Pyongyang to give up nukes. Even under the best circumstances, finding a common ground will require the two leaders to overcome a long history of mistrust and animosities that stretch back nearly seven decades. If the Iran Nuclear Deal offers any clues, lengthy negotiations, effective implementations and detailed verification process will not be made any easier with a partner like North Korea; the Agreed Framework, under the Clinton Administration, is a cautionary tale, too, as it slowed down North Korea, but the deal fell through when both sides failed to deliver on their promises. Even the most comprehensive sanctions are not the answer—but neither is naïveté.

Still, while this period of hope follows months of high anxiety and rapid-fire headlines about potential war, it’s important to maintain the long view. Diplomacy remains the best recourse—and that will require a process that will take much more time and subtlety than the high-profile ratcheting up of war anxieties. There is a common Korean proverb that warns its people, often diligent and disciplined in seeking success, to avoid the human tendency to jump to conclusions: “Don’t drink the kimchi soup before you are offered the rice cake.” Those involved in negotiations will have to hold fast to that idiom; in light of the changing dynamics of the Asia Pacific region and the likely decline of the role of the United States, the need for a coherent, long-term strategy on North Korea is now greater than ever before. 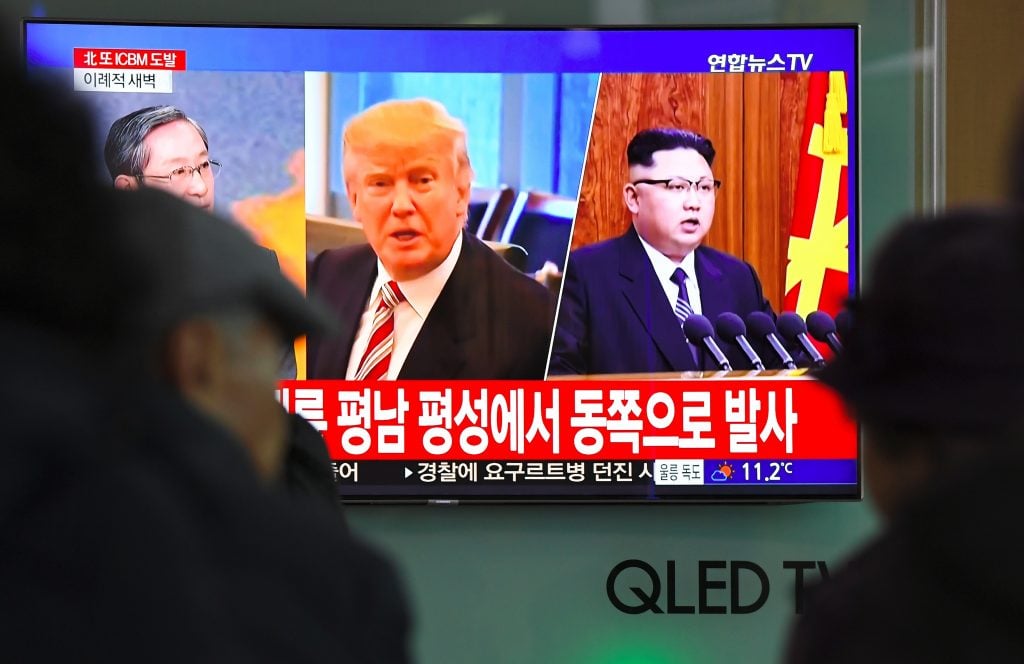 Conditions are different in North Korea this time around. Today, North Korea’s cyber warfare capabilities are formidable; the regime is known to sell chemical and biological weapons to countries in the Middle East and Africa, including Syria, and it regularly conducts business with non-state terror groups. The Kim regime has also now nearly mastered the technology required to become a full-fledged nuclear power, carrying out four more nuclear tests with estimated yields that are about 10 times what the atomic bomb dropped on Hiroshima, as well as some 90 ballistic missile tests. This is in addition to their substantial conventional weapons capabilities, which could cause massive damage to South Korea and neighbouring countries in a matter of minutes. Unlike his father or his grandfather, Kim could negotiate with the United States with a confidence that could not have been enjoyed by the regime in the past. And contrary to popular perceptions, North Korea is a rational actor when it comes to pursuing its own interests; since its inception, North Korea has justified its nuclear weapons program as a self-defence measure.

But under the façade of military strength, North Korea is also under a lot of pressure, both because of its crumbling economy and a rise of ideological cracks; the growing numbers of defectors and the rise of public violence, such as executions, demonstrate the regime’s internal fragility. And having spent much of its limited resources on developing nuclear capabilities, North Korea is also in desperate need of investment in its domestic economy to save its own people from starvation. There is a clear incentive for North Korea to use the language of peace on the Korean peninsula, save face, and gain economic and security concessions from Seoul and Washington. From the perspective of American administration or even the international community at large, the need to stop or contain North Korea—which the CIA has identified as one of the main threats to American national security for years—could not be more urgent. These complexities all make North Korea a unique, delicate force to negotiate with.

The devil will lie in the details. We know from experience that sanctions alone will not change North Korea’s behaviours. No number of UN Security Council resolutions will stop North Korea from investing further in weapons at the cost of starving its own people. Pyongyang will likely demand a series of economic concessions and some form of security guarantees, such as the withdrawal of U.S. troops from South Korea or the suspension of joint US-ROK military exercises, or at least a longer pause between the exercises or a reduced scale in the coming years. South Koreans would be eager to resume family reunions across the 38th parallel and will likely want to restart work in the Kaesong Industrial Complex, a collaborative economic development between the two Koreas that was shuttered after a 2016 missile test.

Whatever the North Korean motives may be in wanting to resume dialogue with the United States, diplomacy offers the best hope in reducing misunderstanding and miscalculations. It will require matching words with action, as building trust will necessarily be a long and complex process. It will require accepting that the Kim regime will have to survive, which will surely be central to any nuclear restraint deal. And it will require buy-in from regional powers, to help offer the right mix of economic and stability measures: The Chinese will be vital partners if all parties want to avoid the risk of a failed state and refugee surge, and Russia, which needs markets for its gas, could be convinced by the possibility of a pipeline to South Korea, serving its commercial interests.

But everything that has gotten us here—the Olympic rapprochement and even the high-level summit between Kim and Trump—is only the first step towards making meaningful progress for a long-term peace on the Korean peninsula. Reconciliation on the Korean peninsula and the potential reunification of the two Koreas will take years of difficult negotiations. What we need now is a collective resolve for grace under pressure. The longest journey starts with a first step.