After Trump's leaks to the Russians, what could happen next? 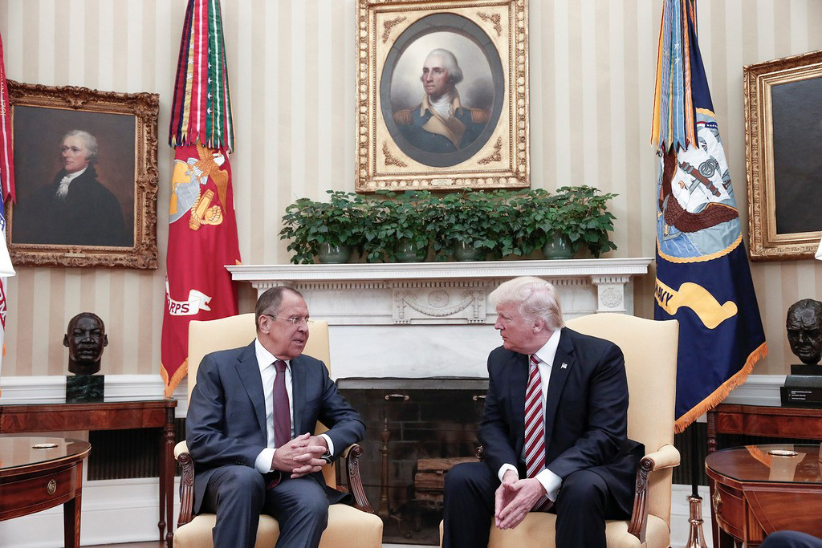 In the aftermath of the big story about President Trump spilling classified information to the Russians, let’s look ahead to future scoops and the ensuring reaction.

WASHINGTON (May 23) – The Russian foreign minister departed his White House meeting earlier this month with more than classified information—he also left with Trump’s wallet, his Netflix password and the President’s nose, the Washington Post has learned.

The president’s top aides rushed to deny the story. The moment they finished, Trump confirmed the story.

“He got it fair and square—just reached out and grabbed it right off my face,” the president tweeted. “Showed it to me between his fingers and everything. I’d recognize it anywhere. Beautiful, the best nose.”

Trump said the incident reinforced his view that the U.S. must get along with Russia. “I mean, they’re basically witches and wizards over there. We can’t compete with that.”

On Fox News, Sean Hannity praised Trump for his sacrifice: “The next time you smell a roast cooking or a pie baking, sniff one extra time for our brave president—for he shall sniff no more.”

In a press conference, presidential spokesman Sean Spicer said it was strictly a coincidence that since the Russians’ departure, the military has been unable to locate Air Force One.

WASHINGTON (June 16) – Multiple sources have confirmed to the New York Times that President Donald Trump is, in fact, two adolescent boys in a trench coat.

“I find this troubling, but let’s not rush to judgment,” Sen. Lindsey Graham said. “Those could also be midgets.”

The revelation casts in a new light the president’s quick temper, short attention span and ignorance of even the most basic facts about the world. It also helps to explain why Trump giggles every time someone says the word “duty.”

Outside the U.S. Senate, Sen. Marco Rubio was cornered by reporters and asked about his tweet from the 2016 campaign, in which he wrote: “If Hillary Clinton becomes president and is revealed to actually be two adolescent girls in a pant suit, she should be impeached immediately.”

Rubio said he didn’t see the connection. “This is a completely different situation—a trench coat doesn’t even have leg holes! I continue to support the president. Or the presidents, as the case may be.”

Sen. John McCain warned against overreaction. “I think we would all agree that the president has the legal authority to be comprised of as many persons or people as he and/or they so choose,” he said.

Fox News portrayed the news as yet more evidence of Trump’s revival of American exceptionalism. “Elsewhere in the world, you’ve got kids working in sweatshops or serving as child soldiers,” Sean Hannity said. “But in Trump’s America, we made two of them president. Your move, China.”

WASHINGTON (July 18) – Pentagon sources have confirmed to the Washington Post that four-fifths of the continental United States is minutes away from being obliterated by thousands of incoming Russian nuclear missiles.

On CNN, Wolf Blitzer described the impending nuclear holocaust as “historic.” Meanwhile, Fox News brought on a medical doctor who pointed out that “radiation is often used as a cancer treatment, so really we should be thanking the Russians.”

Sen. Ted Cruz, speaking from behind a human shield made up of staffers and a few strategically placed orphans, said: “Barack Obama had eight long years to prevent America from being destroyed by Donald Trump in 2017—and he just didn’t get the job done.”