Max Fawcett: 10 years ago, Alberta needed geologists and petroleum engineers. Now they're unemployed. See what happens when post-secondary funding is predicated on a boom-and-bust economy? 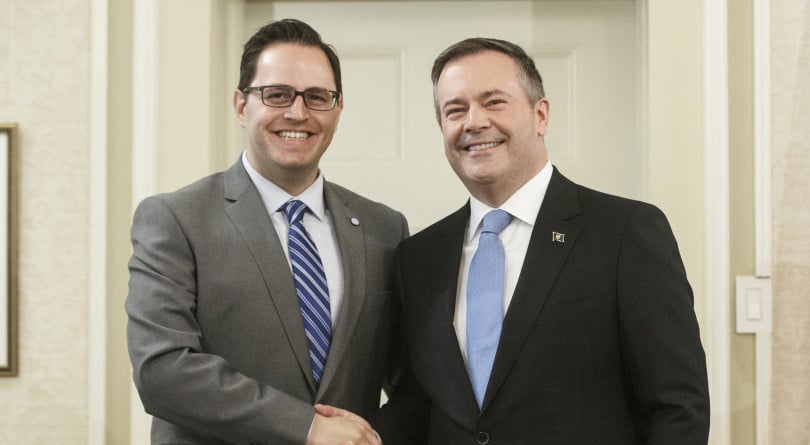 Alberta Premier Jason Kenney shakes hands with Demetrios Nicolaides, Minister of Advanced Education after being sworn into office, in Edmonton on Apr. 30, 2019. Alberta is launching a new funding model for post-secondary institutions, tying some of the public money to performance measures. (Jason Franson/CP)

The thousands of students who attend Alberta’s post-secondary institutions every year are used to their work being graded. But now, thanks to a new policy announced by the provincial government, the people running those universities and colleges will be getting their own report cards.

Beginning this year, up to 15 per cent of their operational funding will be tied to metrics like enrolment, graduation rates and the median incomes of their program’s graduates. That will reach 40 per cent of total funding by 2022—in addition to cuts in last year’s budget that reduced funding for operating expenses by five per cent. According to Demetrios Nicolaides, the Minister of Advanced Education, “this new model is designed to help our students succeed.”

For a government that’s heavily invested in reducing so-called “red tape,” implementing a model that effectively wraps the province’s colleges and universities in it is a curious choice. And for a political movement that instinctively decries governments that “pick winners,” it’s odd to see them implement education policy that encourages post-secondary institutions to do that with their own programs. This approach also runs afoul of something called “Goodhart’s Law,” which postulates that “when a measure becomes a target, it ceases to be a good measure.” As such, it’s not difficult to imagine post-secondary institutions deciding to prioritize short-term success over longer-term upside in order to protect their operating funding grants.

But the most pressing question here is whether this will actually help Alberta’s students succeed in the fast-moving knowledge economy of the 21st century. As it happens, the answer is staring Alberta right in the face in the form of thousands of unemployed geologists and petroleum engineers.

It was just a decade ago that oil prices were safely above $90 a barrel, the world appeared to be in desperate need of more supplies and reserves, and companies in Alberta couldn’t build new oil sands projects fast enough—or find the people needed to build them. If a given college or university’s funding had been tied directly to the job status and annual salary of its graduates back then, the obvious choice would be to fund more spaces for petroleum engineers, geologists and other oil and gas professionals. It certainly wouldn’t have been to create more spaces in the bachelor of arts program, and encourage students in it to pursue an education in philosophy or political science.

And yet, the last 10 years show exactly why post-secondary institutions should steer clear of trying to predict labour market outcomes. By the time students who started studying geology or petroleum engineering at the beginning of the decade finally tossed their mortarboards into the air, the world they graduated into was fundamentally different from the one they had been expecting.

The shale drilling boom was well underway, oil prices were in retreat, and the industry didn’t need anywhere near as many geologists and engineers as it thought it did. In 2016, only 363 of the University of Calgary’s graduating class of 812 engineering students received internships, and while that figure has improved marginally in recent years it’s still way below where it was when the industry was booming at the beginning of the decade.

Those philosophy and political science graduates, meanwhile? They might be doing a lot better, given that they were equipped with a broader set of intellectual tools. As ATB Financial’s Chief Economist Todd Hirsch wrote in the Globe and Mail back in 2013, “your university education, at least at the bachelor of arts level, was never intended to land you a job. It was intended to make you a more complete thinker. It was intended to teach you how to absorb complex information and make reasoned arguments. It was, quite simply, intended to teach you how to learn. Those are skills that you’ll use in any field of work.”

They’re skills that Stewart Butterfield, the founder and CEO of Slack, has put to great use. He took his bachelor’s degree in philosophy from the University of Victoria and parlayed it into a master’s degree before going on to create a bunch of tech companies that eventually culminated, almost by accident, with Slack, the hugely popular team-messaging app. He didn’t get educated as a computer programmer, and he didn’t go to school to get an MBA. But he still managed to create a company that’s worth billions of dollars and employs thousands of people.

Yes, Butterfield is an obvious (and enormous) outlier, but he’s also emblematic of the kind of world we live in today. When an invention or idea in one part of the world can completely disrupt an entire industry in another, investing too heavily in a specific set of technical skills is far riskier than it used to be. Adaptability and intellectual dexterity, meanwhile, are more valuable than ever. According to a 2018 survey of 95 large private sector employers conducted by the Business Council of Canada, the five most valuable skills in a new employee were collaboration and teamwork, communications, problem-solving, analytical capacity and resiliency.

And, as it turns out, the skills that get cultivated in those much-maligned arts programs have been more valuable than many people realize for a while now. A study released by the Georgetown University Center on Education and the Workforce last week revealed that graduates of liberal arts colleges in the United States saw better returns on their college educations than their peers at other schools—but only in the long run. According to the study, the 40-year median return on investment for a degree from a liberal arts institution was $918,000—very similar to the returns offered by both four-year business and engineering schools.

If the Government of Alberta really wants its students to succeed, as the minister responsible for its post-secondary institutions has said, it should focus more on investing in their educations rather than weighing their near-term value. It should support colleges and universities rather than cutting their funding. And it should understand that the best way to grow an economy in the 21st century is by increasing the supply of people who can think critically and solve problems—including ones their government can’t yet foresee.