Alexandre Bissonnette's loved ones missed the signs. We can't make that mistake again.

Opinion: A reformed white supremacist on how easy it is to disregard clues of radicalization—just as they were with the man who killed six in a Quebec City mosque 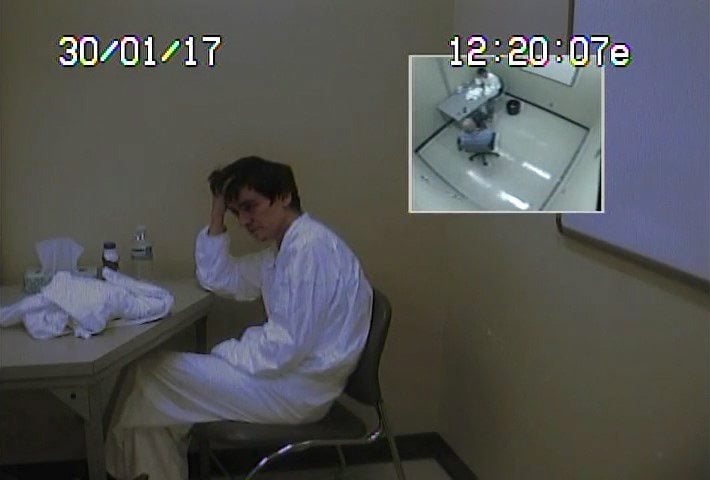 Police interview Alexandre Bissonnette on January 30, 2017, the day after the mosque attacks, in this still from an interrogation video shown by the Crown to the sentencing hearings in Quebec City in this handout photo. (HO/Surete du Quebec/CP)

Elizabeth Moore is an educator, speaker and consultant on racist extremism. She is a former member of The Heritage Front.

On a dark winter evening in the early 1990s, my mother returned home from a parent-teacher interview night looking rather amused. Like any kid, I was initially relieved.

She told me Mrs. Craig, my family studies teacher, told her that I was very angry. Imagine—her quiet, honour roll, 17-year-old daughter, an angry kid. She laughed uproariously.

Just a few months later, I was a card-carrying member of a white supremacist group, The Heritage Front.

Family members missing the signs of radicalization in young white people is so common it’s to the point of cliché. And yet, statements from the parents of Alexandre Bissonnette—the man who killed six in Quebec City’s Islamic Cultural Centre—point to the terrible truth at the heart of this stereotype.

The entire country was shocked at the initial reports of the terrible violence, but his family was met with another level of horrible astonishment when they discovered their son was the killer. On the night of the tragic shooting, Bissonnette behaved “normally,” they told police. On the one-year anniversary of the attack, they described his actions as “completely inexplicable.”

How can radicalization—to the point of violence—be missed by their families, by people who live under the same roof?

As the various pieces of Bissonnette’s mindset and motivations become publicly known, we are offered an opportunity to better educate the general public about what signs to watch for when someone is in the process of radicalizing and planning a violent or terrorist act. They can be hard to spot, especially given how experts frame it as “self-radicalization,” as if it’s something done privately, in a vacuum. But that term that never rang true to me; after all, no one radicalizes without the influence of others, whether it’s in the form of literature during a vulnerable part of life, as was the case with me in the analog 1990s, or the words and videos that racists post online. Instead, what happened to Bissonnette is an example of what might be better called “lone radicalization,” the product of binging on extremist content while remaining socially isolated from real-world contact with both their loved ones and white supremacist groups.

Indeed, excessively isolating oneself in order to engage in any online activity is a well-documented factor in deepening depression. Worsening mental health and obsessively engaging with extremist material is bound to create a negative feedback loop, which would be challenging to stop.

Bissonnette’s online activity leading up to the killing is telling in both the geographic location of the hits and the number of prominent sites he visited. His influencers were not obscure, underground hate sites, but rather well-known—albeit despicable—media figures.

From Richard Spencer and Alex Jones to Donald Trump, the people who influenced Bissonnette were predominantly American, and white supremacists have always maintained cross-border relationships. Though Canada would like to believe racist extremist ideology stops at the border, the internet—which has made that border practically non-existent—exposes the degree to which that kind of thinking is faulty. Law enforcement, educators, counsellors, and parents ignore the activity of racist extremists in America and Europe at their peril: We are not immune.

READ MORE: The KKK has a history in Canada–and it can return

The normalization of extremist right-wing ideologies is particularly dangerous. Commentators on Fox News and other outlets Bissonnette followed—as well as the current President of the United States—are flirting, or outright embracing, racist and extremist viewpoints. In retrospect, it is no surprise that a world leader who calls for a wall to be built between his nation and Mexico, enacts a travel ban on certain Muslim nations, and invites those accused of racism to serve in prominent positions on his team, could further a person’s radicalization process.

Following mainstream rightwing content is also a good cover for anyone trying to hide their true intentions. Who would be suspicious of their son watching news commentary that is easily accessible on cable TV, or following stories about the U.S. President? While I don’t believe these mainstream influences alone would lead someone to radicalize, taken in combination with more hardline voices, it creates a dangerous elixir of hatred and legitimization.

READ MORE: As we remember a mosque massacre, let’s find the hero within us

But the biggest challenge is convincing families to take their blinders off.

My parents, like Bissonnette’s, would have been the first line of defence in stopping their child’s radicalization. However, it is understandably painful, if not impossible, for the average person to imagine their child, despite all the warning signs, being capable of embracing hatred—or worse yet, acting on it.

It is therefore important that everyone else be able to see what the family cannot. We are all familiar with the phrase “it takes a village to raise a child.” That’s true when it comes to preventing radicalization, too.

I unfortunately lost touch with Mrs. Craig after I finished high school. Perhaps not surprisingly, I didn’t like her very much at the time, because she could see through my disguise. If I could, I would ask her what she saw in me that everyone else missed, and why she didn’t do more to possibly change my racist trajectory. There were unnecessary points of failure in my past, just as there are for vulnerable people today. It is up to us to reduce those points, and fast. Otherwise, having failed to learn our lessons in the past, we will have another Alexandre Bissonnette to learn from in the future.