All of Justin Trudeau's unfinished business

Justin Ling: The PM often says there's 'always more to do', but after six years in power it’s worth asking why—and what work has really gotten done at all? 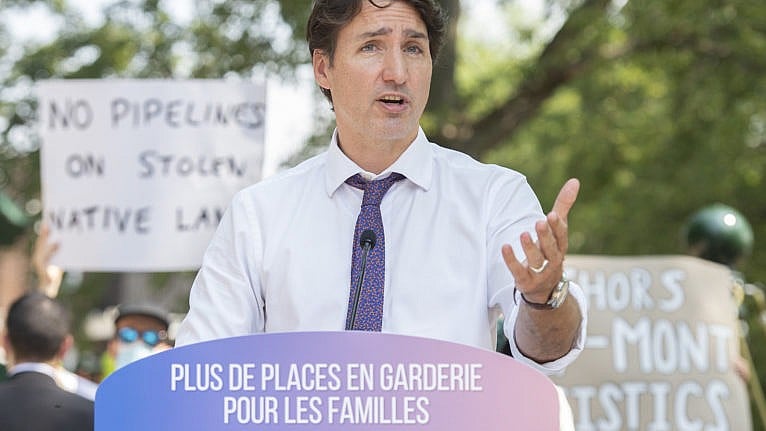 Trudeau speaks during a childcare funding announcement in Montreal on Aug. 5, 2021 (Graham Hughes/CP)

Put limits on how banks can gouge homeowners hard-hit by the COVID-19 pandemic? No. But,  “there’s always more to do,” he says. “And we’re going to make sure our financial partners are part of the solution to making sure Canadians get through this.”

The Royal Canadian Legion asks for $30 million to save ailing legions? They got less than half. “There’s always more to do,” he says.

Finally bring clean drinking water to all First Nations communities? We’ve blown past Trudeau’s self-imposed deadline, and 33 communities continue to live without safe and drinkable water. “We fully recognize there’s a lot more to do,” Trudeau told the Sprawl.

End a culture of harassment in the Canadian Forces? The top brass have, themselves, been implicated in wrongdoing, and Trudeau’s own minister knew about it.”There’s always more to do,” he insists.

Calls mount to denounce Islamophobia in all its forms after attack on a Muslim family in London leaves four dead? Trudeau won’t even fight Quebec’s odious Bill 21. “There is always more to do,” he says.

Calls for more support to help Indigenous communities unearth unmarked graves on residential school sites? “There is obviously more to do and I think there will be more that we will do.” Facing pressure to stop arresting for drug possession, amidst Canada’s drug poisoning epidemic: “We know there’s more to do.” Climate change, international trade, support for families: “Yes, there is more to do. There is always, always going to be more to do.”

For his six years in power, Trudeau has proven remarkably adept at portraying a government in motion, even while at rest.

But two mandates on, as he seeks a third, it’s worth asking why there is so much work left to do—and what work has really gotten done at all.

Whether it is the policy priorities he himself has identified, or a growing pile of crises facing the country, this government’s progress has often been piecemeal, slow or altogether abandoned.

Sometimes, clearly, the work was just too much for his government. His fervent insistence that 2015 would be the last election conducted under the first-past-the-post electoral system has now become a running joke, as we head into the second election since under the system that seems to do his party very well—because picking a system was simply too much work, and a decision that couldn’t be left to Canadians themselves.

Same, too, with his commitment to run only modest deficits before balancing the budget in 2019—instead, that election year, he ran his largest deficit yet. The temptation to spend evidently outpaced a desire to keep his commitment. Now the pandemic has supercharged those deficits.

A plan for a new era of government transparency hasn’t come to pass either, as plans to expand the Access to Information system to ministers’ offices have long since been disappeared. His government has found itself realizing that secrecy is just easier than the lofty goals of accountability it once put forward.

He hasn’t fixed Canada’s sex work laws, like he promised; nor has he followed court orders to end the practise of solitary confinement in federal prisons like he swore he would. Canada still hasn’t, six years later, settled on a next-generation fighter jet. A supposedly transformational re-investment in housing hasn’t significantly increased funding for affordable housing.

Independent promise-tracker Polimeter found that, at the end of his first majority government, Trudeau had followed through on just around two-thirds of his campaignment commitments. About a quarter were partially followed-through on, and around 7 per cent were outright broken. Middling, but not a total failure.

In his two-year minority mandate—admittedly knocked sideways by the pandemic—things have crunched to a halt. Just one-in-10 of his 2019 campaign promises were marked ‘kept’ by the accountability watchdogs. Around 40 per cent were ‘in progress.’

A number of promises have just disappeared: A planned legislative framework for Indigenous policing has been incessantly talked about, but hasn’t been introduced. His party fundraised endlessly on a vow to axe to the gay blood ban, but the discriminatory and homophobic policy remains on the books. A planned overhaul of how the justice department handles wrongful convictions has not come to fruition either. A pledged ‘Canada Entrepreneur Account’ hasn’t been heard of since 2019.

It’s not as though the COVID-19 pandemic halted all parliamentary business, either. The government has managed to declare a National Day for Truth and Reconciliation, list a raft of new radical groups as terrorist organizations, introduce legislation to wildly expand the mandate of the Canadian Radio-television and Telecommunications Commission to regulate online content, and pass massive budget bills that did everything from create the Canadian Economic Recovery Benefit to expanding the digital services covered by the GST.

It has been curious, amid this flurry of activity, what the Trudeau government prioritized and what it did not.

Justice Minister David Lametti tabled legislation to repeal a raft of mandatory minimums, and to criminalize the practise of conversion therapy for LGBTQ Canadians. Except both bills died when Trudeau announced his election call—meaning Canadians will continue to face years in prison for non-violent drug crimes, and queer people could continue facing psychological torture without consequence.

Senator Yuen Pau Woo told the Hill Times recently that the Senator was ready to sit over the summer to pass the ban on conversion therapy. But the Liberal government only wanted the bill to make it to committee stage in the upper chamber, and did not want it prioritized in order to become law. “That’s what the government wanted to see happen,” Woo said.

Even when it comes to managing the pandemic itself, which Trudeau is sure to invoke with some regularity, there is some gap between the prime minister’s self-evaluation and his results. While he deserves high marks for his vaccine procurement strategy, his government’s efforts to acquire the technology to build a Canadian vaccine passport has been glacial. While plans were first drawn up to install technology to validate Canadians’ vaccines late last year, an actual vaccine passport won’t be ready until December at the earliest—that fact didn’t stop the Liberal government from coming out to pat themselves on the back for their diligent work last week.

The appearance of action, even in the absence of it, is part of the secret to Trudeau’s success. So when the Liberal leader is asked on the campaign trail about his six years in power, listen for that promise that “there’s always more to do.”

Look past that rhetorical judo—because, of course there’s always more to do—and start asking whether Justin Trudeau is really the best suited to get that work done.