Opinion: The former U.K. foreign secretary will surely continue his Wile E. Coyote-esque chase for power—and here are the 'policies' that will fuel it 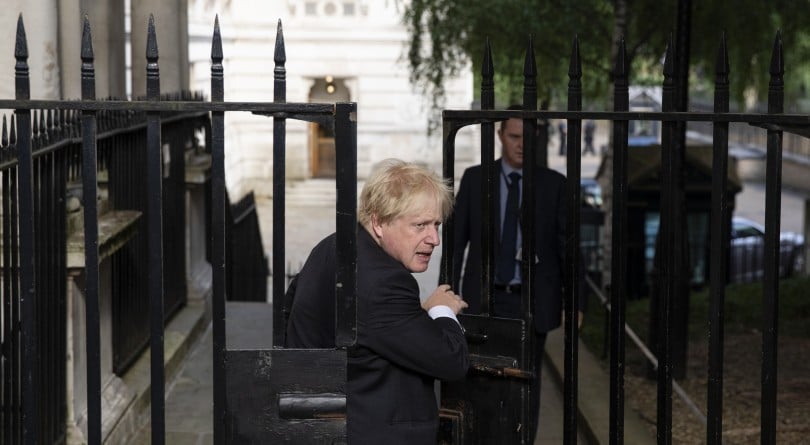 Boris Johnson arrives at Downing Street ahead of the weekly cabinet meeting on July 3, 2018 in London, England. (Dan Kitwood/Getty Images)

On July 9, U.K. Conservative MP Boris Johnson all but Snapchatted his departure from his post as British foreign secretary—ostensibly, his resignation letter explains, because upon consideration, he found that he could not support the deal for a soft Brexit that his party had only just hammered out in a crisis cabinet meeting days before. Of course, most life-forms possessed of sensory organs believed this to be a new step in Boris Johnson’s ongoing quest to lead the party and the nation he’s helped make a God-awful mess of.

“Since I cannot in all conscience champion these proposals, I have sadly concluded that I must go,” he wrote in his letter—and he hasn’t stopped messaging me since. So, in the interest of the historical record, I present, edited for length—mainly I removed about 30,000 word of extraneous classical references—“Boris Johnson Attempts to Ride Five Other Really Terrible Ideas To Power.”

READ MORE: After 48 hours of intrigue, Theresa May and Brexit sit on the knife’s edge

Me: While I’m rather flattered that you reached out to me on this, Boris, I… are you sure you have the right Tabatha? Are you sure you’re not looking for literally any other Tabatha in the universe?

Boris: It must be you. I’ve considered all the options…

Me: I appreciate your confidence in me, Boris. Although you do give the appearance of being a man with an awful lot of confidence. It’s possible you’re just running out of vessels in which to place it. It strikes me you might simultaneously be texting a drained and rusted bathtub awaiting pickup on a curb in Burton-on-Trent and a series of empty grande Starbucks cups in Red Hook. I’m pretty sure bringing me on as chief strategist is a terrible idea.

Me: Oh, yeah, right. I forgot who I was talking to.

Boris: No rational person would support this initiative. Which is what makes it so perfect.

Me: You really do believe that throwing your weight behind really terrible ideas is the best way to become prime minister, don’t you?

Boris: Did you get my email?

Me: Yes, and that is some very slick graphic work you’ve got there, Boris. But how far do you think you can go on a campaign slogan of “That jar of expired mayonnaise that’s been sitting in a cupboard all summer with a broken seal is just fine to eat. Don’t let Brussels deny you your rightful mayonnaise”?

Boris: To be clear, nobody would ever accuse me of working to improve the lives of my supporters. That’s not the goal of the “Yes You Mayonnaise” campaign. I’m just trying to hitch myself to a really terrible idea, win the support of terrible people, and ride it straight to 10 Downing Street!

Me: But what then, Boris? Won’t getting stuck having to implement whatever really terrible idea you settle upon make things pretty difficult for the hypothetical Boris Johnson government?

Boris: That’s the genius of supporting really terrible ideas. There will always be just enough opposition to let me say, “Of course I want to replace all food in the U.K. with spoiled mayonnaise, but the opposition or out-of-touch members of my own party are thwarting me.” Also, the more terrible the idea, the more people will say, “Hey, that’s a really terrible idea, why would you want to do that?” and nothing rallies people behind a Breveryone-eat-spoilt-mayoteer quite like a bunch of “doctors” and “normal, sensible people” trying to stop them getting horrible food poisoning.

Me: But even really determined stupid angry people can’t vote Tory if they die because they tried living on nothing but spoiled mayonnaise.

Boris: You’d be surprised at what a person who feels he’s been being “condescendimented” to by the anti-Bre.coli elites of Europe can do.

Me: While experiencing vomiting, abdominal cramping and diarrhea?

Boris: That we will sell as the new all-British “Freedom of movement!”

Me: I am watching your Instagram. I don’t care how you believe it worked out for David Cameron—put your pants on, Boris, and step away from the pig.

Me: Look, Boris, if you’re messaging because you feel compelled to use the word “picaninny” again, I’m going to block you.

Boris: But what if I backed creating some sort of English Académie Française to pare the English language down to nothing but obscure racial slurs?

Me: I just want to say, my phone plan doesn’t include long-distance texting, you’re costing me a fair bit of money here.

Me: Boris, I don’t care how much you like the outfit, stepping into a cage with live lions feels like a rash move.

Boris: Nonsense. When the history books come to be written, this will be seen as the hour in which the British bucked the trend of not being in a cage with live, very hungry lions. We will be the nation that had the courage to break free from the idea—however noble its origins —that being trapped in cage with a Panthera leo, of the cat family Felidae, or in fact being eaten by any of the of carnivorans, is an easily avoided mistake.

Me: By all rights this should be a very tough sell, Boris.

Boris: The toughest sell. So tough, in fact, that if anyone tries to buy what I’m selling, the police will likely intervene to stop them! If economists suggesting that people “maybe not vote to throw the whole European market into chaos, I mean, what the hell?” gets people riled up, who knows what being bodily dragged away from the lion enclosure at the London zoo will do?

Me: Oh my God, you’ve got people going to the shops and buying tiny whips and fancy hats, haven’t you? You’re rallying your “happy to be being eaten by a lion to own the continentals” base, aren’t you, Boris. You know this whole “bad idea-ing your way to power” thing hasn’t been working out for your party as a whole. Cameron’s had to go hide under a bed somewhere, Theresa May’s snap “Brexit mandate” blew up the conservative majority. And you’ve gone from being perplexingly beloved to being a national laughingstock to now being an international laughingstock. Have you considered just… not supporting so many obviously bad ideas?

Me: Maybe limit yourself to bad ideas you don’t actually recognize as terrible? Which I reckon leaves the field quite open.

Me: You’re not pretending you think you’re Winston Churchill, anymore than you’re pretending to be an idiot, are you?