Terry Glavin: The Kurds were the ones giving ISIS a thrashing when the U.S. and Obama would not. Now Trump's America is leaving them for dead. 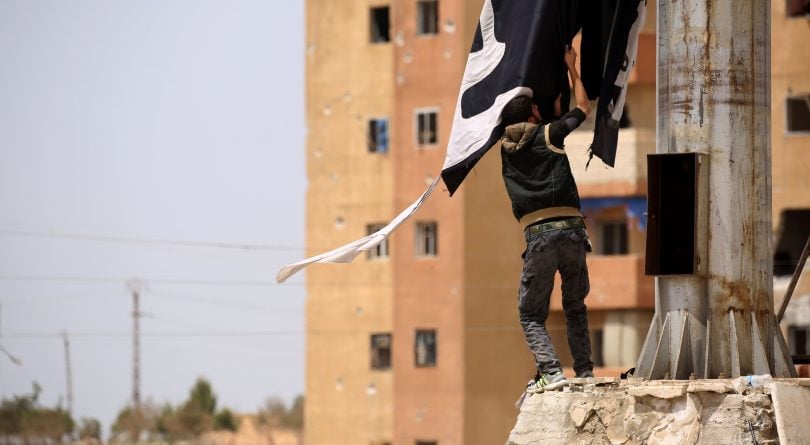 A member of the U.S.-backed Syrian Democratic Forces (SDF) removes an Islamic State group flag in the town of Tabqa on April 30, 2017. (DELIL SOULEIMAN/AFP/Getty Images)

It’s a hell of way for U.S. president Donald Trump to close out the year. Not with a bang, and not with a whimper, but with a noose draped around the necks of NATO’s Kurdish allies in Syria, and the rope handed to their most determined and powerful enemy, Turkish strongman Recep Tayyip Erdogan.

Last Thurday afternoon, in a 79-second video he’d posted himself on Twitter, Trump announced that he was going to withdraw the 2,000 remaining U.S. troops in Syria, prompting the immediate resignation of U.S. Defence Secretary Jim Mattis. It later emerged that in a Dec. 14 telephone conversation, Trump had told Erdogan: “You know what? It’s yours. “I’m leaving.” On Sunday, Trump again took to Twitter, pointing out that “Turkey is right ‘next door,” adding “Our troops are coming home.”

For four years, ever since Abu al-Baghdadi’s Islamic State burst out of the Syrian desert, smashed through Iraqi defences and unleashed a genocidal rampage against the Yazidis in the Shingal Mountains of Iraqi Kurdistan, the Kurdish resistance in Northern Syria has been the Islamic State’s worst nightmare. And all the while, Erdogan has devoted himself to making life a living hell for the Kurds.

Erdogan has ordered helicopter gunships to destroy Kurdish villages in Eastern Turkey, killing hundreds of civilians, displacing half a million people and leaving behind what the UN High Commissioner for Human Rights last year called an “apocalyptic” landscape. After breaking a truce in 2015 with the outlawed Kurdistan Workers Party (or the PKK, which has fought an insurgency in Turkey and is listed as a terrorist group by the U.S. and Canada), Erdogan has imprisoned hundreds of democratically elected Kurdish leaders and dozens of Kurdish journalists. His forces have engaged in torture, extrajudicial killings, and the enforcement of merciless 24-hour curfews in Kurdish towns and cities.

Turkish forces have made several incursions into Northern Syria to drive out the Kurdish People’s Protection Units (YPG), which Turkey considers to be an extension of the PKK and which has established an autonomous region in Northern Syria. In Erdogan’s most recent incursion, the brutal assault on the Kurdish-majority district of Afrin earlier this year, the Turkish army has carried out a campaign of ethnic cleansing. The Syrian Observatory for Human Rights reckons at least 300,000 Kurds have been expelled from the district, with their homes and farms turned over to Syrian Arabs displaced from Eastern Ghouta and other areas destroyed in the Syrian civil war.

The Kurdish-led Syrian Democratic Forces (SDF), a NATO-backed formation that began as an alliance between the YPG and elements of the anti-Assad Free Syrian Army, has been leading the ground war against the Islamic State. After Trump’s declaration that he was inviting Turkey to take the place of U.S. in Northern Syria, Turkish commandos were massing on the outskirts of the strategic SDF-controlled town of Manbij.

If there’s a lesson in any of this, it’s that the U.S., under Donald Trump, is as unreliable, capricious and erratic a friend to the Kurds as it has ever been.

Barack Obama was in the White House back in the summer of 2014, when the world was shocked by the news coming out of the Shingal Mountains in Iraqi Kurdistan. After having put down roots in Iraq’s Sunni minority following Obama’s disastrous support for the corrupt and murderous regime of Nouri al-Maliki—the Iranian favourite who more or less stole the 2010 Iraqi elections—the Islamic State went on a rampage in Iraqi Kurdistan, slaughtering Yazidi men and enslaving the women. Thousands of Yazidis were trapped on Mount Sinjar, where they were dying of thirst and exposure, and it was only then that the NATO powers, led by the United States, decided something had to be done.

Obama assembled an 11th-hour coalition that began bombing ISIS targets and providing air drops to the encircled Yazidis, but on the ground the Yazidis’ saviours were the Kurdish guerrillas of the YPG. By then, the YPG had already liberated the Kurdish territory of Northern Syria from the depredations of both the Islamic State and the Syrian mass murderer Bashar Assad.

In August of 2014, YPG fighters poured across the border into Iraq and rescued the Yazidis from their hiding places in the Shingal Mountains, escorting tens of thousands of them back across the border to safety in Rojava, as the Kurds call their Syrian enclave on the frontiers with Iraq and Turkey.

In the weeks that followed, on a hilltop post about 50 kms into Rojava from the Iraqi-Syrian border, I spoke with a young YPG commander, Adam Dericke. What puzzled him was why it was that Obama had by then already squandered three years of opportunity to deal with Assad, blowing hot and cold in his approach to what had started out as an almost entirely America-friendly and pro-democratic Free Syrian Army.

Even more perplexing, the Syrian Kurds were alone in giving al-Baghdadi’s self-proclaimed caliphate a thrashing, and they’d pleaded to join Obama’s anti-ISIS coalition, but Obama was freezing them out. “We have put up a strong resistance to Islamic State,” Dericke told me, without the slightest exaggeration. “We have had many attacks from them, and we have fought them well.”

Erdogan’s Turkey had refused to sign up, but Turkey retained its NATO membership. The coalition went on to include 60 countries, including Canada (involving about 600 Canadian Armed Forces personnel, mostly in troop training and support functions). The fiercest and most effective local force in Syria: The Kurdish-led SDF.

Trump’s move may be shocking and weird, but there is an echo in it of Obama’s 2013 decision to allow Assad to cross his “red line” on the use of chemical weapons and go instead with a hastily cobbled-together chemical weapons agreement between Obama’s secretary of state, John Kerry, and Russian foreign minister Sergei Lavrov.

After Obama ushered the Kremlin back onto center stage in the Middle East, Russia immediately began a vicious bombing campaign in Syria, targeting civilian areas controlled by Assad’s revolutionary opposition. Assad never stopped using chemical weapons. The regime has been implicated in at least 26 sarin and chlorine gas attacks since the Kerry-Lavrov deal.

One shudders to think what will happen now that Trump has cleared the field for Erdogan.