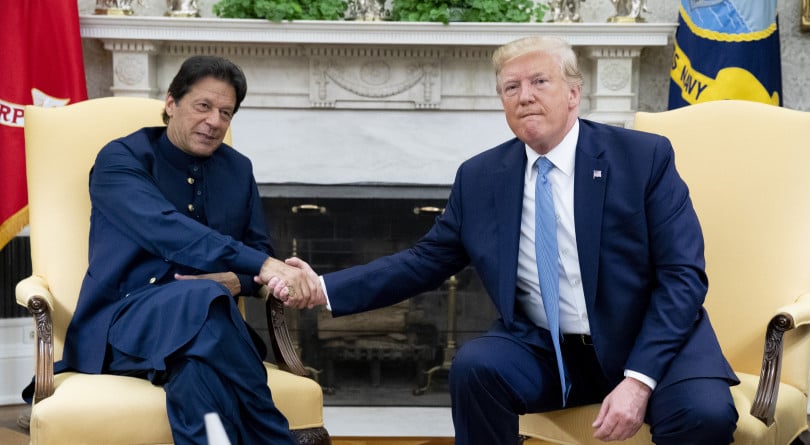 In April 2016, then Republican presidential frontrunner Donald Trump, delivered a foreign policy address at the Mayflower Hotel in Washington, D.C. outlining his vision of America’s place in the world. Nestled in the otherwise usual Trumpian blethering about America First and the failures of previous administrations was a passage that all but nailed down what foreign policy under his presidency would look like.

Well, unpredictable is indeed what the world got with Trump. And not just in his approach to ISIS. In year three of the Trump presidency, we are seeing everything from the comically absurd (the pitch to buy Greenland) to the dangerously uninformed (pulling out of the Iran nuclear deal). A clear trend has taken hold in the U.S. administration’s slapdash foreign policy, marked by its penchant for opportunism and a lack of forethought.

Other governments are now following the Trump lead. On Aug. 5, India’s ruling Hindu nationalist BJP party revoked Kashmir’s autonomous status, a move that sent shock waves through the international community. The contested region is now in lockdown, cut off from the outside world and flooded with hundreds of thousands of Indian troops. Tensions between India and Pakistan have spiked and there seems to be no diplomatic means left to calm things down.

The Pakistani government has pulled out its ambassador to India and ejected the Indian ambassador in Pakistan. The Pakistani military has threatened to shift soldiers away from Pakistan’s border with Afghanistan, where they are supposed to be fighting jihadist militants, and threatened to upend the U.S.-Taliban peace process.

In response, Trump offered up his usual gibberish: “Kashmir is a very complicated place,” he said. “You have the Hindus and you have the Muslims. I wouldn’t say they get along so great.”

In a more predictable international environment, all of this would have been avoidable. But Trump’s disruptive style—first isolating Pakistan and forging closer ties with India, then courting the Pakistanis again to help with the Taliban peace negotiations and punishing India with trade tariffs—made predicting what he (and the United States) might do impossible.

READ MORE: The most dangerous thing Donald Trump has done yet

In a final spasm of incoherent disruption last July, Trump inexplicably blurted out during a press conference at the White House with Pakistani Prime Minister Imran Khan that the Indians had asked him to mediate a solution to the Kashmir issue. Only days later, India began shifting troops to Kashmir.

The offer rattled India, which has always maintained that Kashmir is a strictly bilateral issue with Pakistan, rejecting any outside interference, a point they made emphatically in a tweet rejecting Trump’s claim.

In response, they acted, and another domino fell in what used to be a finely-balanced international system based on predictability.

India would have thought twice about making such a move in a rules-based world, fearing the likely scenario of a U.S.-led UN Security Council resolution condemning it. Indeed, the idea of annexing Kashmir had been on the table for decades; Trump made it a reality.

It was only the latest in a tumbling cascade that has come to define the Trump administration’s overall foreign policy. Whether it’s pulling out of the Iran nuclear deal or arbitrarily slapping tariffs on both allies and enemies alike, trust in the system America itself built is waning fast.

And without trust, there can be no system. “A loss of trust amounts to a lack of faith and confidence in the ‘system’ itself,” writes Rachel Botsman, in her 2017 book, Who Can You Trust? “What should we believe in if the system has failed us? Who, or what, can be relied upon? We begin to fear what else can go wrong. What other shortcomings we don’t yet know about might lurk in the system? Fear, suspicion and disenchantment are deadly viruses that spread fast.”

Botsman was writing about trust in the financial system but as she notes, the election of Donald Trump marked a historic moment in the decline of trust in general. His unpredictability heightens the “fear, suspicion and disenchantment” that fuels the rise of authoritarians. It encourages unilateral actions that then further erode international norms.

Those norms were fraying well before Trump. The international system has been showing signs of decay since the end of the Cold War, when the world began transitioning from a bipolar political landscape defined by competition between the U.S. and the Soviet Union to a unipolar world dominated by the U.S. to what we’re seeing today—a multipolar world dotted with diverse power centres.

Previous U.S. presidents have tried to push back on the decline of American pre-eminence but it was Barack Obama who realized there was no stopping it and the prudent thing to do was manage how the emerging world would look. He opted for multilateralism and strengthening international institutions.

Obama was playing the long game, based on the principal that if the new world order would be defined by multiple power centres, then there needed to be a framework of international norms by which everyone interacted. Institutions and international rules would help avoid chaos.

Then came Trump whose winner-take-all world view has decimated the institutions that were supposed to ease the transition to a new order. In response, leaders like India’s Prime Minister Narendra Modi act as if the present moment is all that matters. For him, and his Hindu nationalist supporters, annexing Kashmir is a win and those pesky international rules and norms that get in the way of winning—human rights, self-determination, negotiation and compromise—are the losers.

Kashmir is only the latest salvo in the demolition politics Trump has encouraged. And the world is a more dangerous place for it.