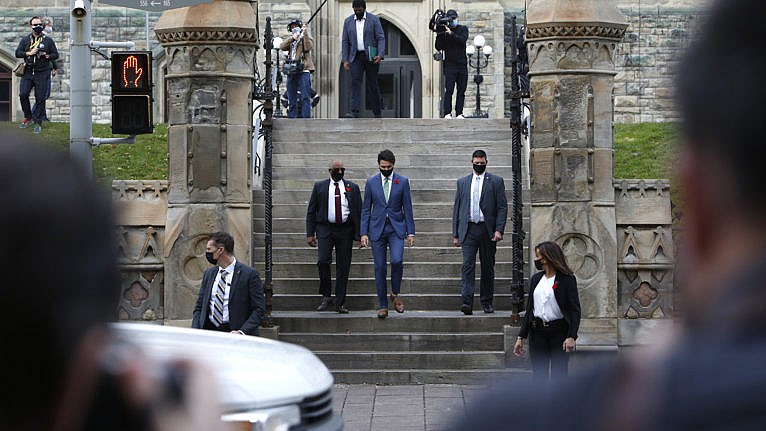 Trudeau walks to a news conference in Ottawa on Nov. 6, 2020 (David Kawai/Bloomberg via Getty Images)

“This sucks.” With those well-scripted words from Justin Trudeau, the Big Red Team signalled their theme for the next campaign…our guy is one of the cool kids. Never mind that Justin Trudeau will be in his 50th year in December, never mind that that makes him older than Erin O’Toole, Jagmeet Singh and Annamie Paul. JT speaks young.

He says ‘intersectionality.’ He does yoga poses on the hood of the million-dollar vintage Mercedes that his father gave him. You want more! You’ll never see Erin O’Toole do that! What a bore, so what that he’s a lawyer and former Canadian Armed Forces captain, he has off-the-rack suits. Not cool! JT is progressive.

Why else would Jagmeet Singh keep propping up his government? JT is as green as the Greens. Just look at what he promises to do to fight climate change, some time before 2050, when he’s in his 80th year…He just hasn’t had time to get to it yet.

As we ramp up for a spring election, the exceptionally experienced Liberal team that left Andrew Scheer gasping for air over abortion, LGBTQ rights and…his American citizenship, will be zeroing in on Erin O’Toole’s CPC.

Conversion therapy is horrific. A friend had it imposed on him by his parents 40 years ago. He left Montreal, and his family, to live his life in another city, but has borne the scars his whole life. A quack therapist made him watch slides and movies and any time he saw two men getting close, was given a shock! There are less violent forms but all have the same purpose: to find a “treatment” for who people are. It should be banned. Period.

Conversion therapy is the Liberals’ opening gambit with O’Toole who, like several of his MPs, has tried to duck and explain. When the Liberals brought the issue before the House, O’Toole said it would be a free vote. That, of course, has just put a circle around the stain. You are either against mentally torturing young people to change who they are or you’re for it. Period.

The Liberals are very, very good at this. Chinks in an adversary’s armour are spotted with laser-like precision. They’ll promise anything their adversaries have promised if it’ll take the wind out of their sails, even if they don’t have the slightest intention of fulfilling their new promise.

During the 2015 campaign, we’d promised to restore mail delivery to those areas where Harper had recently cut it. It wasn’t in the Liberal platform but Trudeau copied that promise in the waning days of the campaign, knowing it was popular in some hotly contested suburbs around Montreal. When I asked him if he would respect his promise during question period shortly after the election, he pivoted and said I should read his program, and I’d see that it’s not in there!

And so it was with his oft-repeated promise to make sure that 2015 was the last election with the unfair first-past-the-post electoral system. Into the political short-term memory dumpster it went, never to be heard from again.

Hearing Trudeau’s woke admonitions on race relations, you’d almost figure it has to be somebody else who repeatedly got dressed up in blackface. Good thing that Sacha Baron Cohen has a better memory, his new hit movie Borat 2 opens with the now famous Time magazine picture of an adult-aged Trudeau in brownface.

This time around, things may not be that easy. Trudeau has a new and, for both him and Jagmeet Singh, worrisome opponent on the left. Annamie Paul won’t be impressed by anything Trudeau has to offer. She is as authentic and articulate in French as she is in English and is a breath of fresh air on the Canadian political landscape.

Elizabeth May made no secret of her penchant for supporting the Liberals. When push came to shove, she’d always be there for them. Paul seems to be cut from different cloth. The Liberals will be doing everything they can to figure out how the Greens, with just a few weeks to prepare, managed to give them a deathly scare in Bill Morneau’s old riding. Jagmeet Singh is still trying to assess who’s still in his camp, as Annamie Paul barnstorms and recruits relentlessly.

The Conservatives, of course, will be the Liberals’ main opponents in the upcoming election. They have the highest floor (30 per cent even on Harper’s last try) but the lowest ceiling (cracking 35 per cent is a challenge). They too caused a surprise during the recent Toronto by-elections, coming within a hair’s breadth of taking the Liberal seat in York Centre.

Anyone who thought that Trudeau was bluffing when he and Pablo Rodriguez went “all-in” threatening to call an election over a parliamentary motion creating a new committee should think again. Although it would have been grossly irresponsible to call an election in the middle of a pandemic, the Liberals knew their path to victory was only going to get narrower.

The last thing the Liberals want is to have to present a budget. That will require them to show real numbers and start raising taxes just before an election. Never popular and an opening for the Conservatives.

Normally, the Red playbook says, pivot to the NDP and Green base and say: sorry, but you have to vote for us this time otherwise those horrible Conservatives will get back in. It has often worked. This time, it’ll be a lot harder for Trudeau to pull that off. For one thing, progressives are fed up with his broken promises on key environmental and social issues. For another, the Greens have a new leader who appears, so far, to be able to reassure and inspire.

The Liberals will continue to pummel the Conservatives with all they’ve got but, for now, O’Toole has been staying within the polling margin of error of his Liberal opponents. He too has been showing himself to be quite strong both in debate and in his press conferences. He’s clearly following Stephen Harper’s disciplined method to work on his French which, in just a couple of months, has improved markedly. The Bloc is clearly worried about O’Toole and they and the Conservatives will be fighting for the 40 or so Quebec seats outside greater Montréal, where they will be battling for the same votes.

This election will be unlike any other and the wild card that is Annamie Paul may well help determine the outcome.