An open letter to young Canadians in the sciences

Science can seem intimidating. But uncertainty, says Lauren Hayward Sierens, can be powerful if you embrace it. 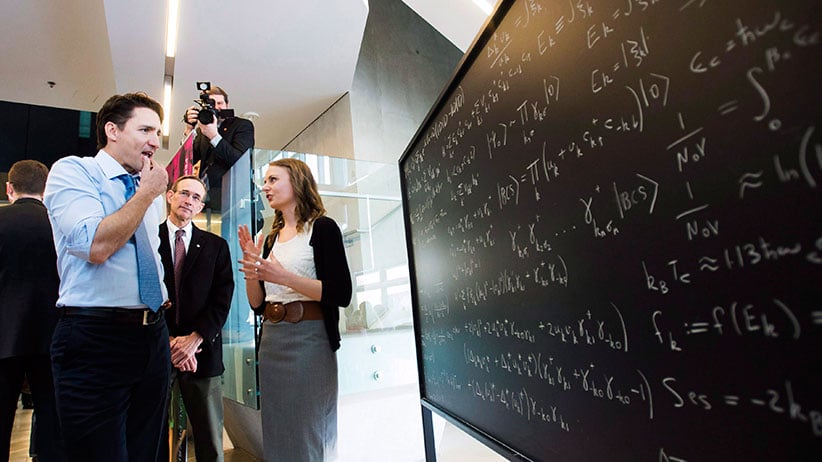 Prime Minister Justin Trudeau looks at a chalk board while speaking to Lauren Hayward Sierens, before making an announcement at the Perimeter Institute for Theoretical Physics in Waterloo, Ont., on Friday, April 15, 2016. (Nathan Denette/CP)

Lauren Hayward Sierens was born and raised in Winnipeg. She is a Perimeter Scholars International Fellow at Perimeter Institute for Theoretical Physics, which is leading Innovation150, a nationwide celebration of ingenuity that is currently traveling across Canada.

As a physicist, I frequently encounter colleagues whose scientific curiosity is so innate they seem to have been born to do physics. I am not one of them. My path to physics was full of uncertainties, fraught with “imposter syndrome.” I didn’t dream of growing up to be a scientist, and yet I found myself pulled in that direction.

What I’ve come to realize is that a passion and a career need not be things we are “born into,” but rather things that become apparent if we approach the uncertainty of life with curiosity and an open mind.

I took my first high school course in physics without having any idea what the word “physics” meant. I was required to enroll in at least one science course, but since I didn’t really know which one I’d find most interesting, I enrolled in all of them. When in doubt, I figured, cover your bases.

Over the next two years, I discovered that I enjoyed using math to solve applied problems, but physics itself still seemed like a collection of mysterious equations. Later on, I studied science in university, but even then I couldn’t decide what to do with my education.

Overall, my classroom education seemed somewhat abstract until a pair of turning points.

The first was a computer science course I was required to take, despite my lack of interest in—and borderline phobia of—the subject. I had never programmed before, and assumed I would suffer through the class, but found myself hooked when I realized I was learning a new language which, despite its simple vocabulary, allows one to accomplish groundbreaking tasks.

The second turning point came when a physics professor offered me a job working in his computational physics group—an offer that, at the time, seemed way beyond my abilities. I was only a second-year undergraduate student, and felt overwhelmed by how little I knew about physics. I quickly told the professor that I wasn’t ready.

Once again, thankfully, I found that my presumption was wrong. The professor convinced me to give it a try, which led to four consecutive summers as a research assistant examining the intersection of computer science and physics. I still didn’t feel like I was a “born scientist,” but I began to realize that an uncertain path, although scary at times, can lead to pretty exciting opportunities.

It’s a path that took me to a graduate program in theoretical physics at the Perimeter Institute in Waterloo, where I am now teaching and mentoring new grad students while pursuing my own research in computational condensed matter physics.

One of the most valuable lessons that I learned from graduate school is that research is best conducted by exposing uncertainties and asking questions. I used to think I couldn’t be a successful researcher until I knew enough about physics; I now realize that science is full of unknowns and open problems. No single scientist has all the answers, and the most successful researchers are those who work together and who are not afraid to make mistakes. I have been fortunate to collaborate with scientists from different areas of academic expertise and from different corners of the world. Our discoveries have relied on each person’s unique perspectives, as well as the ideas that emerge from group discussions and debates.

The path to my career in science didn’t always feel like the route I was born to take, and I certainly couldn’t have guessed even a few years ago where I would be today. Looking back, however, I realize that each twist and turn had a distinct marker: an influential teacher, a word of encouragement from a mentor, a moment of inspiration from unexpectedly learning something new. Each experience helped me to overcome my self-doubt and to find my passion for physics.

I now hope that, in my own way, I can encourage potential future scientists to use curiosity as a guide in the face of uncertainty. Not knowing what subjects you want to study or which career you want to pursue isn’t always a bad thing, and you can’t always plan where life will take you. What’s most important, particularly in science, is an openness to explore ideas and opportunities. And who knows where science can take you—just ask Canada’s incoming governor general, Julie Payette.

One of the most intriguing aspects of scientific research is that we can’t always predict the breakthroughs of the coming decades. We need inquisitive and even skeptical minds to develop revolutionary technologies and to push the boundaries of possibility and discovery.