An unimpeachable source lobs an unavoidable bomb into Ontario's election 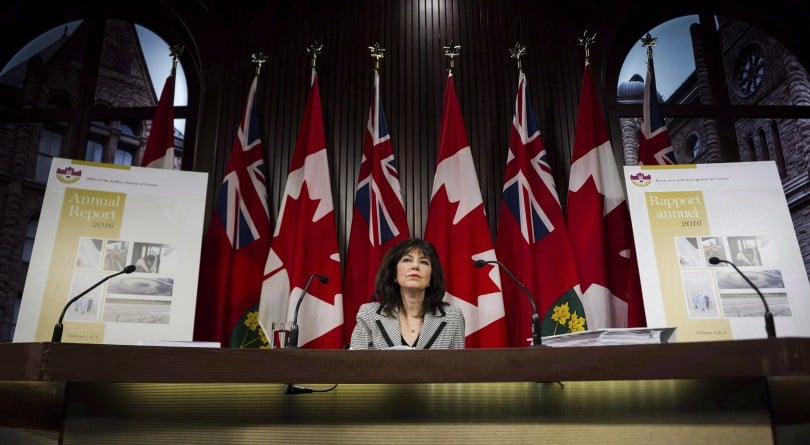 In politics, the identity of your critics matters.

Every government expects attacks from the opposition parties, pundits, and ideologically hostile special interest groups. Most don’t connect, and even those that do can usually be framed as predictable partisan behaviour. Indeed, the news would be if the attack dogs didn’t bark. As The Wire’s urban philosopher Omar Little once observed, it’s “all in the game, yo.”

But when an independent arbiter of public life jumps in to land a heavy blow on a sitting government in the run-up to an election, as Ontario’s auditor general Bonnie Lysyk did yesterday when she accused the Liberals of misstating this year’s budget deficit to the tune of $5 billion (Lysyk says the deficit will be $11.7 billion, not $6.7 billion), people sit up and take notice. Auditors general might not be papal in stature, but their words are treated as gospel in political circles.

“When expenses are understated, the perception is created that government has more money available than it actually does,” Lysyk noted in her brutal pre-election report. “Government decision-makers might, therefore, allocate money to initiatives and programs that is actually needed to pay for expenses the government has failed to record properly,” she added.

Maclean’s has a new politics newsletter. Sign up here >>

For those of you who don’t speak Auditor Generalese, Lysyk is essentially saying that the government isn’t being upfront about how much money it’s spending on things they’ve already sold to voters which is allowing them to sell voters other stuff they think they might like more. It’s not exactly the script a government already under the cosh wants to hear, especially given it confirms the narrative already established by the Liberals’ cash-happy pre-election budget.

The AG’s broadside presents a rather obvious problem for Premier Kathleen Wynne: an unimpeachable source has lobbed an unavoidable bomb into the path of her re-election campaign. And only a fool would take a run at an auditor general in mounting a defence, which is why voters will soon be hearing the words “accounting dispute” from the Liberals more often than the attendees of an actuarial convention.

Indeed, Wynne moved quickly to portray the report as part of an ongoing “discussion” with the auditor general over an accounting “disagreement.” Here, the premier is technically correct, as the auditor general and her predecessors had booked the Ontario Public Service Employees’ Union Pension Plan and the Ontario Teachers’ Pension Plan’s holdings as an asset starting in 2002, until Lysyk changed course in 2016. But change it she did, and the Liberal refusal to acknowledge the change is the source of the current disparity in the budget deficit figures.

For her part, Lysyk considers the government’s accounting on pensions “lawful” but “not right.” The trouble for Wynne, other than the integrity of her critic, is the pension back-and-forth isn’t the only dispute with the auditor general. Lysyk has also thumped the government for the record-keeping of its “Fair Hydro Plan,” which the AG claims will add another $4 billion to its costs. Here, the AG was more pointed in her criticism: “The accounting proposed by the government is wrong.”

The news will have an impact on the electoral tactics of the Tories and NDP, too. The particulars of the dispute are eye-glazing and hard to follow, which is why the Tories and NDP will try to keep their aim on the eye-watering top-line figure of $5 billion, but even here they’ll need to be mindful. An old adage in politics is that voters are outraged over small numbers more than large—witness Bev Oda’s infamous $16 glass of orange juice—so even a $5 billion discrepancy might be written off by voters as nothing more than the usual government tomfoolery. Perhaps that’s why Ontario PC MPP Vic Fedeli was quick to brand the $5 billion as a “trust issue.” This is the broader charge PC Leader Doug Ford will want to try to make stick against Wynne.

But Ford himself remained quiet on the subject of the Auditor General’s report, with nary a tweet being fired—likely because Lysyk has calculated similar disparities in the deficit figures for 2019-20 and 2020-21, which will become Ford’s problem should things go his way on June 7. Patrick Brown’s soon-to-be-replaced “People’s Guarantee” aped the Liberal accounting on both pensions and hydro. The NDP platform will also have to reckon with the AG’s preferred way of tallying up the province’s expenses. Something will have to give.

Fortunately for Ford and NDP leader Andrea Horwath, the auditor general won’t be weighing in on their programs. Her mandate is limited to Wynne, and right now it’s the Liberal record that’s in the dock. And so Wynne’s charge that her opposition faces the same accounting problems will be heavily discounted, if it’s heard at all. Voters might not follow along too closely, but they do know who’s responsible for putting the province in its current budgetary hole.

In the meantime, the opposition will gallop across the province making promises, appending the giant caveat of needing to take a good look at the (cooked) books once in office before knowing whether they can move forward with their plans.

It might not be fair for anyone—but it’s all in the game, yo.