Opinion: The outrage that sparked a campaign in support of Liberal MP Celina Caesar-Chavannes speaks to how Canada deals with racism 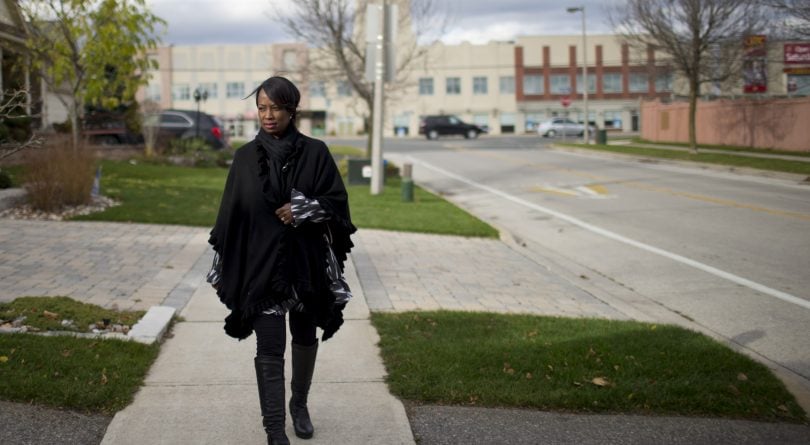 WHITBY, ON - NOVEMBER 12 - Celina Caesar-Chavannes is the Liberal candidate in the riding of Whitby-Oshawa which is holding a by-election on Monday November 17. Photographed in Whitby for a Tim Harper column on November 12, 2014. (Carlos Osorio/Toronto Star via Getty Images)

The first thing to know about Black political involvement in Canada is that, until very recently, its success or failure has mostly revolved around managing white perceptions.

This isn’t hyperbole, or even a gripe, but the simple reality of getting elected and keeping one’s seat in a country where Black people make up less than three per cent of the population. For far longer than I’ve been alive, there has been an unspoken understanding in the community that, while the Black politician knows firsthand the frustration, pain, and anger of living in a society that abides our unequal treatment, there is a certain decibel level above which a politician cannot speak. Better to do the work quietly and accomplish what they can for the community, than risk offending the white Canadian who, while benefitting from the systemic racism that keeps him perched atop the social hierarchy, feels unfairly indicted for having his position explained to him.

This is what makes Celina Caesar-Chavannes unique among Canada’s Black political class. The Liberal MP for Whitby not only carries the work outside of Parliament Hill to the broader community, often speaking at events and encouraging organizers to demand more from their elected representatives, but publicly names white supremacy for what it is. Whether speaking to systemic and institutional violence, or individualized racism (e.g. discrimination against Black women’s natural hair, a topic for which she became known internationally), Caesar-Chavannes has, like Rosemary Brown before her, defied the accepted wisdom that Black politicians must face down racism with resolute silence.

And for that, she was named a racist.

In the last few weeks, Caesar-Chavannes has made headlines repeatedly for using Twitter to call out Canadian politicians and media figures who, having no firsthand experience with racism, have attempted to define the terms of its discussion. First, there was her suggestion that Conservative MP Maxime Bernier “be quiet” when Bernier criticized Immigration Minister Ahmed Hussen’s language in cheering a budget set-aside of $19 million for programs that serve racialized Canadians. She later apologized for her comment, and Bernier rejected the apology via Twitter, responding that it’s “time we Conservatives stop being afraid to defend our vision of a just society made up of free and equal individuals and push back against those who want to silence any opinion that differs from theirs.”

And then there was her response to Robert Fife, the Globe and Mail’s Ottawa bureau chief, who questioned the existence of “systematic racism” in a CPAC interview. Fife was discussing the Liberal government’s announcement of a strategy to counter systemic racism, and flippantly dismissed the announcement as a “wedge issue,” given that schoolchildren seemed to be integrating well with one another. Caesar-Chavannes tweeted that Fife’s comments made her question his “ability to investigate stories of the Canadian experience without bias.”

In response, former Rebel Media co-founder Brian Lilley wrote a blog post accusing Caesar-Chavannes of “seeing racism everywhere,” following an earlier claim by Rebel Media owner Ezra Levant that she is “a racist,” and “a disgrace.” In a 20-minute video, Levant claimed that “Canada has been good to her,” implying that Caesar-Chavannes could not have achieved similar success in the “very poor” and “very small” Grenada, her country of birth. He later compared Caesar-Chavannes’s description of her skin colour—“Black, no sugar, no cream”—to Malcolm X’s anti-integrationist coffee allegory, solidifying the assertion that her extremism made her unfit for office. This, of course, triggered a wave of harassment by the Canadian alt-right, with several Twitter users calling her a “racist,” and others descending into racial slurs.

In the messy business of combating racism at the political level, too often the burden of white anger falls on the shoulders of outspoken Black women. In the UK, Labour MP and shadow home secretary Diane Abbott has spoken at length about the harassment and racial abuse she’s faced as a result of her Black skin and high profile. In the United States, Congressional representative and Donald Trump critic Maxine Waters has faced racism not only from the President’s alt-right supporters, but from the President himself. It seems that, whenever a Black woman in office uses her platform to denounce the systemic oppression of Black people, the immediate and overwhelming response is to tear that woman down, paint her as an extremist, and break her will to continue.

For transparency’s sake, Celina Caesar-Chavannes is a friend of mine; the social circles that comprise Toronto’s Black political, business, and media class overlap heavily, and most of us are at least passingly familiar with one another. So it would be disingenuous of me to pretend I have no interest in seeing her succeed, or that I didn’t have a personal stake in promoting the #HereForCelina hashtag on Twitter (which was started by fellow Liberal MP Adam Vaughan, and joined by thousands of Canadians including the Prime Minister) in response to the harassment she faced.

But the backlash that she has faced over the last few weeks is more than an unfair attack on a friend. It has been an instructive guide to the way we deal with racism in this country. We avoid naming the issue for as long as possible (witness Justin Trudeau’s acknowledgment of the UN’s International Decade for People of African Descent almost three years after he took office), and when it is named, we stand by and watch as the whistle-blower is attacked by aggrieved white people who demand gratitude for merely tolerating our existence.

The right-wing attack on Caesar-Chavannes is the scenario that many Black politicians before her have avoided by keeping their heads down in public, while discussing matters of race within the confines of the community. And it demonstrates the importance of discussing these issues frequently and in the open. If, as other writers have suggested, we keep a low profile on discussing matters of race, we inevitably surrender the power to shape the conversation to those least equipped to handle it.

Levant isn’t fit to discuss Caesar-Chavannes’s racial politics when he missed that her proud “no sugar, no cream” description wasn’t lifted from a Malcolm X speech, but rather a Heavy D song that praises dark-skinned Black women in a culture that has, for centuries, elevated lighter skin. Bernier isn’t fit to discuss racism when he lacks awareness that the white moderate’s mantra of “colour-blindness” is its own pernicious form of racism. And Fife isn’t fit to criticize systemic racism when it seems he isn’t even clear as to its definition.

Eliminating racism means much more than a personal distaste for neo-Nazis and other unrepentant bigots. It means supporting Black women who’ve spoken up about the soft bigotry of Bay Street, written about Canada’s history of policing the Black body, and called attention to the violence of forcibly placing Black children in the care of the state. It means showing up for Black women, like Celina Caesar-Chavannes, who use their political platform to advocate fiercely for an equal society. And it means facing the uncomfortable truth that our institutions—schools, social services, the justice system—were not designed for the protection and equal treatment of racialized Canadians. We’ve long passed the time when white perceptions about our language and our politics ought to be considered when advocating for our lives.

And that’s why I’m here for Celina.