Terry Glavin: The PM had a five-star ecological plan to satisfy Alberta, environmentalists and, maybe most importantly, China. Then it all fell apart. 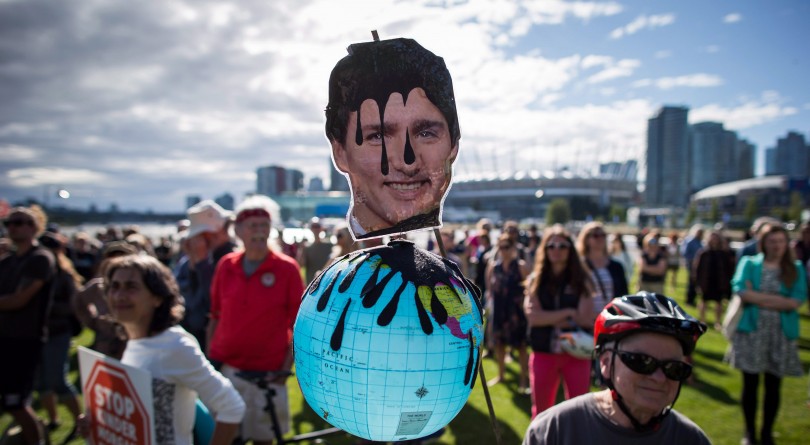 A protester holds a photo of Prime Minister Justin Trudeau covered in oil during a protest against the Kinder Morgan Trans Mountain Pipeline expansion in Vancouver, B.C., on Tuesday May 29, 2018. (THE CANADIAN PRESS/Darryl Dyck)

After all the protests, the political brinksmanship, the intrigues and the ambuscades, it might seem extraordinary that Justin Trudeau’s government has decided to nationalize Kinder Morgan’s Trans Mountain subsidiary and punch its pipeline through the Rocky Mountains as a federally-run project, at a potential total cost of $11.9 billion.

In a way, though, it’s just more of the same. Since the 1990s, more than $20 billion in federal and provincial tax dollars have been sunk into ports and roads and rail lines and bridges in various “Pacific gateway” infrastructure initiatives, and all for more or less the same public purpose, or folly, that Ottawa’s new Trans Mountain initiative is intended to be put.

The point, or at least the selling point, is always the same. We have to diversify our trade by expanding into Asian markets. We shouldn’t be so reliant on the Americans. All these years and all that money later, things haven’t gone exactly to plan. We’re still as reliant on the United States as we used to be.

Our trade with Japan and Southeast Asia hasn’t much budged. But Metro Vancouver, being a welcoming North American port with super-efficient road and rail links into the continent, is a voyage of 58 fewer hours from China than it takes super cargo carriers to reach Los Angeles. So it’s no surprise how things have gone. Back in the early 1990s, Canada enjoyed a modest trade surplus with China in the $1 billion range. Nowadays, we usually run a trade deficit with China on the order of about $45 billion.

READ MORE: Rachel Notley on Trans Mountain: ‘It’s time to pick those tools back up, folks’

There’s one thing that Beijing has made clear, in all its smiling and bullying and handshaking and veiled threats, and all its opinion-page guest essays and briefings with business editors. It’s that if Trudeau thinks he’s going to get anything like his hoped-for “golden decade” of deepened trade relations with China, he’s going to have to come up with a pipeline from the oil sands to the coast. Preferably carrying oil from bitumen mined by Chinese state-owned enterprises, but in any case, a pipeline.

So, Finance Minister Bill Morneau’s announcement on Tuesday that Ottawa will take over the whole damn Trans Mountain enterprise to do just that is more or less more of the same. It’s not a complete coincidence that the decision came only a week after Beijing was badly spurned by Trudeau’s cabinet in the nixing of the planned takeover of the Canadian construction giant Aecon Group by a Beijing-owned corporation that answers directly, as they all do, to the Chinese Communist Party.

After extensive consultations with Canada’s intelligence agencies, cabinet turned down the bid, citing national security. Or, as Chinese ambassador Lu Shaye puts it, “the excuse of national security.” Prior to the decision, Ambassador Lu had been making the rounds warning that Canadian misgivings about the sale of corporate assets to China’s state-owned enterprises were “immoral.” After the decision, it’s fair to say that Lu had not changed his mind: “I have said that slandering Chinese state-owned enterprises in this way is immoral.”

So, getting back in Beijing’s good graces would make some sense, and a pipeline is what China wants most. Last summer in Beijing, Natural Resources Minister Jim Carr told a group of Chinese energy executives and money men that Ottawa wants exactly the same: “We have to expand our export markets in all of our natural resources, and that is why China is so important to us. That’s why we approved a pipeline to take Alberta crude to the West Coast, and then on to Asia.”

So, more of the same, except weirder.

There was always something strangely counterintuitive in the way Justin Trudeau proposed to keep Canada’s commitments to the December 2015 Paris Climate Accord, a token of global leadership that has been central to Trudeau’s carefully polished brand. A key element in his climate plan was a complex and hard-to-describe domino effect of provincial carbon taxes that would allow Alberta’s oil sands to expand, with all the attendant extraction and infrastructure and greenhouse gases and pipelines that you would expect, and hey presto, social licence, middle class jobs, and we save the planet besides. The math seemed to add up, too.

From the start, though, there was a whiff of alchemy about it all. A climate change strategem so winningly cunning that its five-star ecological credibility entirely depended upon the twinning and rejigging of a capacity-tripled Trans Mountain pipeline to carry Albertan oil to Burrard Inlet, where awaiting tankers would carry the oil through a bustling harbour and out into the island-studded Salish Sea, and then across the ocean to China, the world’s worst greenhouse gas offender?

Well, okay. But what if something goes wrong?

As things turned out, quite a few things went wrong. For starters, Donald Trump was elected president of the United States, the world’s second-worst greenhouse gas offender. When Trump withdrew the U.S. from the Paris pact, he threw the entire architecture of the arrangement out of kilter.

It was bad enough that in the early goings, Trudeau’s Liberal ally in British Columbia, Premier Christy Clark, pitted herself against Alberta’s New Democratic Party premier, Rachel Notley, in a series of cynical, rearguard skirmishes—if not to stop the pipeline altogether then at least to get a generous piece of the action. Then Clark’s government fell to the NDP’s John Horgan, whose minority government was propped up by the Green Party’s famous scientist, Andrew Weaver—formerly of the International Panel on Climate Change, no less. So things only got worse.

It was fun to watch, at least. Alberta and B.C., Canada’s only NDP-led provinces, went to war with one another, after a manner of speaking. Notley imposed a ban on British Columbian wine, then lifted it after Horgan said B.C. would submit its intentions to regulate oil traffic to the courts. But the law Horgan was considering only further enraged Notley, who then prepared a bill to turn off the oil and gas spigots to B.C. altogether. All along, Kinder Morgan was playing a crude game of bluff with Trudeau.

Today, May 31, was the company’s deadline: clear the way for our pipeline or we drop the whole thing. After Trudeau had expended so much political capital in the magic of the arrangement, what was he supposed to do?

Bill Morneau had promised to indemnify the company for any losses, but Ottawa had already green-lighted the Trans Mountain expansion, and even if Horgan’s court gambit went nowhere the project would still face a wall of Indigenous and environmental protest. Then again, Trudeau had vowed to push the thing through no matter what, because, well, it’s hard to say, exactly, because of the alchemy involved.

The internationally acclaimed uber-environmentalist Bill McKibben tore a strip off Trudeau in the page’s of Britain’s Guardian newspaper. Trudeau is “simply a scared prime minister playing politics,” McKibben wrote. “There’s no way of spinning the math that makes that okay—Canadians already emit more carbon per capita than Americans. Hell, than Saudi Arabians.” More than 800 eco-friendly businesses across Canada have signed a petition backing Horgan and opposing Trudeau’s nationalization of the pipeline project.

It would be a heck of a paradox if it turns out this way, but there remains an off chance that Trudeau’s nationalization of Trans Mountain might win him some traction in Alberta and pick up votes he’s sure to lose in British Columbia. And it may also be that the wall of resistance on the west coast isn’t quite as formidable as we tend to think.

The Indigenous communities along the pipeline route are nowhere near united in opposition. A consortium of Indigenous groups from Alberta to British Columbia’s Lower Mainland have supported the project for the potential economic benefits associated with pipeline construction and monitoring, and now that the federal government has taken over they’re looking forward to a bigger stake.

Late last month, a national Ipsos Reid survey put national support for the Trans Mountain pipeline project at 57 per cent, and an Angus Reid poll a few days earlier found British Columbians not far behind, at 54 per cent in favour. But a more in-depth Abacus Data survey in March shows that British Columbians are conflicted and torn about the project. The hardliners on both sides take up a share of about 22 per cent each. Some people say they’re worried about oil spills as much as they worry about one province coming out on the losing end of a bitter economic contest with another province.

So everything is up in the air again. There are several agendas in play. Some are antithetical to others, but there’s a lot of overlap, too. In other words, in quite a few ways, it’s all just more of the same.

CORRECTION, May 31, 2018: The potential total cost of buying and expanding the Trans Mountain pipeline is $11.9 billion, not $7.4 billion as stated in an earlier post.