Another school shooting in America, and all the nonsense that will be said

Tabatha Southey: 'It’s not at all that America does not love her children. It’s just amazing the things that those with an addiction will defend' 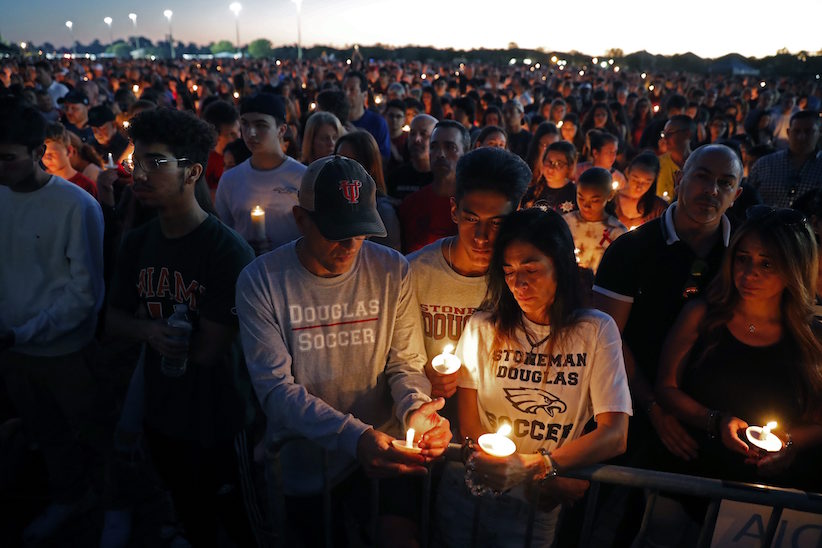 Jorge Zapata, Jr., centre, a student at Marjory Stoneman Douglas High School, holds candles with his mother Lavinia Zapata, and father Jorge Zapata, Sr., during a candlelight vigil for the victims of the Wednesday shooting at the school, in Parkland, Fla., Thursday, Feb. 15, 2018. (Gerald Herbert/AP)

It seemed pretty clear, shortly after the 2012 shooting at Sandy Hook Elementary School  in Newtown, Conn., that America does not have a bottom to hit. If a man killing 20 first-graders, six of the school’s staff and his own mother doesn’t make a nation do something about their gun problem—and indeed, nothing was done—it’s difficult to believe that anything ever will be.

Wednesday’s attack by a man armed with AR-15 rifle on Marjory Stoneman Douglas High School in Parkland, Fla., left 17 dead, a number that authorities say could rise. It’s shocking in its familiarity. Since 2013, 138 people out of the 438 people shot in 239 school shootings in the U.S. have died. One can blink and miss a school shooting in the news these days, covered as they are now much like local weather—they’re inevitable, so do dress appropriately.

It’s not at all that America does not love her children. It’s just amazing the things that those with an addiction will defend, deflect, and explain away as someone else’s fault. In the next few weeks, we’ll hear the usual round of excuses and pleading. There will be some “I’ll change, just give it a rest, now’s not a good time,” but a lot more “There’s nothing to be done, I was born this way, it’s in my Constitution.” “That never happened” will be floated on the fringes, but mostly we will hear various versions of “That didn’t happen because of the gun; why do you always want to make it about the gun?”

When CNN shared a link to a story about a 14-year-old student who live-tweeted the shooting from inside the school, it took a mere second for someone to chime in with “Please note, it is a ‘gunman’ that roamed the halls, not a gun. Keep that in mind the next time a gun control advocate wants to ban guns as the solution to human violence.” This is the call and response that follows every shooting in America. If the National Rifle Association sold a style guide alongside the cigars, signet rings and shot glasses on their website, this tweet would be in it.

Yes, it was a gunman in that school, not some murderous animate firearm. It was a gunman in all the other schools, and in Pulse nightclub, where 49 people were killed and 58 were wounded. It was an also-a-gunman on the Las Vegas strip who killed 58 people and injured 851 by firing into a country music festival—but had it been a flower girl no one would be dead. Given that “Mad foam-pool-noodleman gently rampages through school playfully whacking over a dozen people on head” lacks the horror of just about any headline involving the word “gunman,” I think it’s reasonable to say, “Hey, America, we’re neighbours and friends, if you ever want to talk about the guns…”

“Gun laws don’t work because criminals don’t obey the law” is another common refrain. To which the obvious response is, “Why then have any laws at all? After all, if you outlaw bank robbery, only outlaws will rob banks.” Except of course, people who shoot their classmates or their spouses very often aren’t criminals right up until the point they pull the trigger on their legally purchased and previously responsibly owned guns.

“Reducing the number of guns will not reduce the number of gun murders and suicides here,” other Americans are quick to explain. Strategies that worked in Japan, Australia, Norway, and the United Kingdom are doomed to fail in America, they insist. This is the weirdest kind of American exceptionalism. “We are just totally the worst at not shooting each other and there’s nothing we can do about it!”

“It’s not a gun issue, it’s a mental health issue!” another cry goes out. The anti-gun control crowd develops a sudden and fleeting passion for mental healthcare of the highly specific kind that stops people from demanding gun control.

READ MORE: Charting the normalization of shootings of children, in the wake of the Florida tragedy

The alleged killer in Parkland had been expelled from school, apparently liked to show pictures of dead animals to his classmates when he was there, appeared obsessed with guns and had, according to one student, been abusive to his girlfriend and fought with her new boyfriend. But it’s worth imagining the outcry that would have occurred had he been denied the right to purchase an AR-15 rifle based on any or all of the above. On Friday, the FBI issued a statement apologizing for failing to act on a Jan. 5 tip that the man now in custody was behaving erratically and may have been planning a school shooting. At that point, he already had a gun.

Yes, it should have been more difficult to get a gun, but very likely only because it should be more difficult for everyone to get a gun. Nothing else is tenable. When a society relentlessly advances the notion that guns are a legitimate way of resolving perceived grievances, a sanctioned means of self-expression—indeed, an emblem of both personal and patriotic pride—a lot of people who feel deeply wronged by anyone from sorority girls to former fellow students to society in general, sometimes personified as a crowd of strangers, will hear that message. Grant easy-breezy access to weapons to everyone, and we are bound to keep learning of more lists of secret enemies in more unforeseen slaughters.

Prior to committing mass murder, the Las Vegas shooter’s only interaction with the law was a minor traffic citation—hardly a red flag. On the evening of the killings, he had 24 firearms in his hotel suite, 14 of which were .223-caliber AR-15-type semi-automatic rifles; a large quantity of ammunition and numerous high-capacity magazines were also found. Yet part of the response to those murders was concern for the feelings of other Americans who might have similar arsenals kicking about. My sympathy is limited. There is simply no reason to stockpile automatic weapons unless you’re planning to kill people. It’s not like—opens freezer drawer—“I swear one day I’ll make banana bread.”

Does that mean I have no sympathy for gun collectors? Well, let me put it this way. Both my children collect and play board games. They are responsible board game owners. They carefully punch out cardboard tokens without fraying the edges; they store all their cards in secure protective sleeves. It seems like someone is always “sleeving” around here, and we take a lot of pleasure from this pastime.

However, if it came to light that all across the country, on a regular basis, large groups of children were being cut to ribbons by deadly playing cards, crushed beneath murderous mounted map boards, or having their skulls cracked by high-velocity dice, my family would understand the need for some restrictions on our hobby.

Maybe these restrictions would mean that my kids would have to keep their games at a properly licensed Friendly Local Game Store, or be required to register anything featuring a combat results table, or be unable to buy games online. A mandated 14-day waiting period before purchasing Twilight Struggle might be put in place. If, during that two-week period, a dangerous criminal were to break into our house in the middle of the night demanding “a tightly crafted consim game rated no less than 8 on BoardGameGeek demonstrating the futility of nuclear war, or your life,” that might prove highly inconvenient—but we’d Risk it.

Oh, I know what you’re thinking: a board game won’t keep you safe. Well, odds are, neither will a gun. While having a copy of Diplomacy in your house may ruin friendships, it won’t make the lives of those in your family significantly more dangerous than the lives of your board-gameless neighbours, unlike a gun.

I understand my eldest would fully support a total ban on Betrayal at the House on the Hill, and I’d certainly appreciate legislation requiring that all board games be stored in a secure safe, and not all over the dining room table. Still, it’s possible that necessary restrictions might take some of the joy out of responsible board game ownership. Maybe so much so that a few people would decide to just take up philately instead. That would hardly be the end of the world, for anyone.