Arrests will only thwart investigation of flight PS752 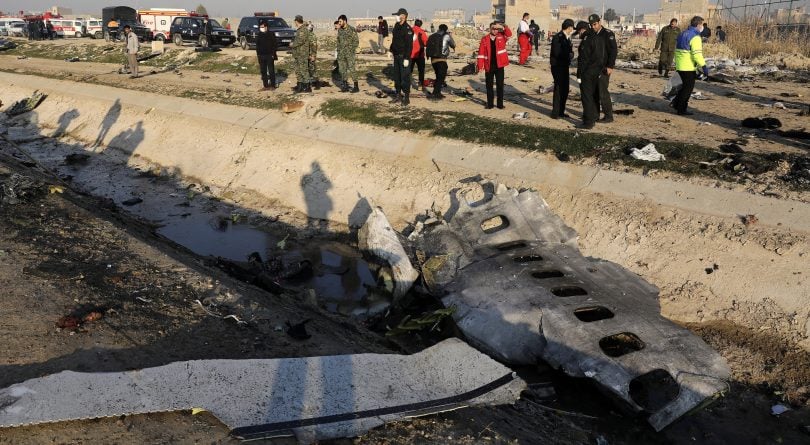 In this Jan. 8, 2020, photo, debris is seen from an Ukrainian plane which crashed as authorities work at the scene in Shahedshahr, southwest of the capital Tehran, Iran. (Ebrahim Noroozi/AP File Photo/CP)

Christine Negroni is an aviation writer and former air safety investigator. She is the author of The Crash Detectives Investigating the World’s Most Mysterious Air Disasters

The news that Iran arrested an undisclosed number of suspects in connection with the firing of two missiles at a Ukrainian passenger jet sounds good, but it isn’t. In fact, the “swift justice” promised by Iran’s President Hassan Rouhani’s makes getting to the truth more difficult. That ought to concern everyone who flies on commercial airlines.

Public outrage followed the admission that two Revolutionary Guard missiles accidentally took down the Ukrainian International Airlines jet, killing 176 people including 57 Canadians. Iranians took to the streets condemning their leaders for days of dissembling. This could explain President Rouhani’s vengeful tweets, including characterizing the error as “unforgivable.”

But if the investigation determines the person or persons who fired the missiles did indeed mistakenly believe the civilian aircraft was a hostile target, many factors led to the error. Safety officials need to know what these errors are, and punishment won’t get them there.

MORE: What caused the Ukrainian plane crash, and why Canada should investigate

Over the past four decades, civilian airplanes have been brought down by missiles at a rate of more than one per decade. To prevent the next episode, governments and the aviation industry must examine everything that contributed to this most recent tragedy.

“We know how it happened, we need to know why it happened,” Canadian Transportation Safety Board (TSB) director of air accident investigations Natacha van Themsche told reporters recently.

Canadians and other nations invited by the Iranians to either observe or participate in the probe will want to know the sequence of events, and the decision-making protocols used by the Iranian military. They will try to find out why the airspace was open for commercial traffic that night given the launching of missiles against U.S. targets in Iraq earlier in the evening. And they will try to understand why the missile was fired at this particular airplane.

Jailing people involved contradicts years of efforts to create what is called “just culture” in the aviation community. “Just culture” means fostering an environment where the community understands that mistakes happen, while investigating closely to learn from the accident and enhance safety.

When the threat of punishment is removed, people are more likely to talk about mishaps, misunderstandings, and yes, incompetence. These reports often reveal previously unknown hazards, and they in turn they can be addressed. The concept is so important; it is part of the recommended practices for international investigations.

The sole purpose of an accident investigation “is to find all causal and contributing factors without attributing blame or criminal or civil liability,” TSB chair Kathleen Fox explained to reporters.

In my years as an air safety investigator and as the author of two books on air accidents, I have learned that clues come from many sources. Everyone knows about the “black boxes,” the flight data and cockpit voice recorders, and they’re often very useful. The airplane wreckage tells a story, too, as do maintenance and training records, weather reports and manufacturers’ bulletins.

But the crash detectives rely heavily on people (and not just those who were in direct contact with the airplane)—operational staff, air traffic controllers, airline schedulers and policy makers often have valuable information as well. In short, people are the greatest resource.

“The success of an air accident investigation is almost entirely dependent on the voluntary reporting of information,” the Brazilian air safety agency wrote in a 2014 report to the International Civil Aviation Organization in Montreal. “The disclosure of this information to accident investigators is essential in preventing the occurrence of future accidents.” This is a point the Brazilians have spent years arguing.

In 2005, a Gol airliner collided with a business jet flying in the opposite direction over the Amazon jungle. The smaller jet was able to make an emergency landing, but the Gol 737 crashed, killing all 154 people aboard. Both the American pilots flying the business jet and several of the air traffic controllers were convicted in Brazilian criminal courts while the air investigation bureau spent years explaining to judicial authorities that locking people up was inconsistent with learning from mistakes. At the time Brazil was not alone in criminalizing errors that led to accidents. Croatia has done so and France continues to do so.

Two generations ago, airplanes started to become much more reliable, while humans remain error-prone. Safety scientists turned their attention to the human factor, finding ways to enhance the performance of all the people involved with flight: those who design and make the planes, the mechanics who work on them, the pilots who fly them and the controllers who keep them safely separated in the sky.

More often than I care to admit, I make mistakes at work. I bet you do too. But in aviation, an error can be devastating. This is why human factors are so important in aviation. There are safety nets, error traps and communication tools to catch or mitigate the screw-ups that are as inevitable as the sunrise. Just culture is the latest addition to the human factors tool box, but the Iranian president seems unaware of it.

In the early morning hours of Jan. 8 in Tehran, on what must have been an extraordinarily tense time with the military on war footing, mistakes appear to have been made and the results were horrifying. Given the global situation these days it is not difficult to imagine a similar confluence of events that puts another airliner in the cross hairs of a jumpy soldier somewhere else in the world.

It is the air investigators’ job not to put people in jail, but to find out what holes in the safety net allowed the Iranians to fire at a civilian airliner. That’s how we prevent the next one.