'As a First Nations MPP in Ontario...I cannot deny my loneliness.'

Sol Mamakwa: Every day I enter Queen’s Park, I see paintings of Queen Elizabeth, the faces of former premiers, and speakers of the house. I see them, but they don’t see me. 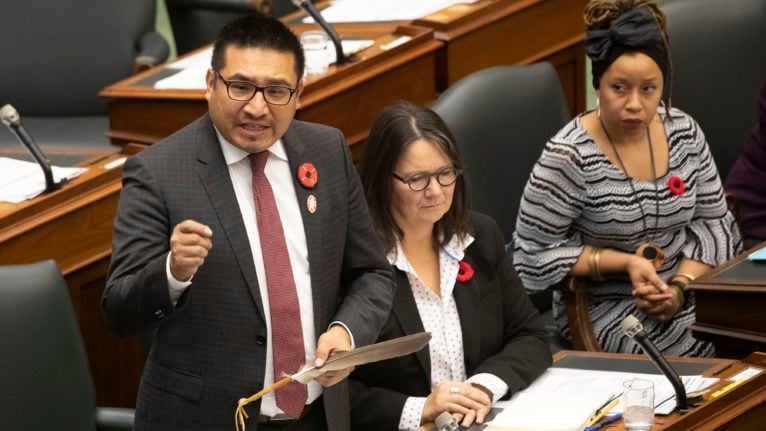 Sol Mamakwa, NDP MPP for Kiiwetinoong, stands in the Legislature during Question Period, in Toronto on Nov. 6, 2019. (Chris Young/CP)

Sol Mamakwa is Anishinabe and a member of the Kingfisher Lake First Nation. He is the NDP MPP and the first elected representative for the riding of Kiiwetinoong. Kiiwetinoong is the word for “north” in Anishinaabemowin, the Ojibwe language.

As I walk on the grounds of Queen’s Park, I am greeted by Sir John A. Macdonald’s statue. I see him pointing. At what? Is he pointing at me? Or is he pointing at our Indigenous land; the land that has sustained our people for millennia; the land he helped take from us. On July 18, demonstrators painted Macdonald pink, and I did not shed a tear.

Every day I enter Queen’s Park, I see paintings of Queen Elizabeth, the faces of former premiers, and speakers of the house. I see them, but they don’t see me. And not just because they died a long time ago. I am intruding in the legislative world they created without us; a world that wasn’t supposed to include us.

How did I get here? I reflect on the solitude of my presence in the legislature as a First Nations MPP in Ontario, and I cannot deny my loneliness. I wonder: Would these white faces on the walls have cared about the experiences of a First Nations MPP if they were alive today? How could they? They did not grow up on the land as I did with my family; the family that taught me our language, our history and our identity.

Before contact, we had our own ways of governing. Our people practiced our own laws and customs. The notion of sovereignty and self-governance for First Nations in Ontario and Canada has been drastically altered. The provincial government is a colonial democracy and it is not designed to accommodate or benefit First Nations. It was built to remove us and our presence from the land. However, we are all treaty partners on this land.

In the early 1900s, Ontario became a signatory to Treaty nine, which covers land that stretches from James Bay to Hudson Bay through to the Manitoba border, almost two-thirds of what is now northern Ontario. Our ancestors understood that the treaty was signed so that the territory in Treaty nine would be shared peaceafully between settlers and the Anishinabe.

MORE: Not a drop to drink

But that didn’t happen. It has been decades of soul-crushing poverty, deplorable housing and high suicide rates. All the lands are vested in the provincial and federal governments. Our agreement was supposed to protect our way of life, including control and governance of our lands and waters. But this sacred promise was broken. This is not what our ancestors agreed to—to be paupers on our own land. We were promised the right to education, not an education in residential schools run by churches. It is not what we agreed to “for as long as the sun shines, the grass grows and the rivers flow,” as it states in the treaty. We shared our land but they didn’t keep their word.

Why is that? The past and present governments do not see us as partners.

I believe that racism is the underlying factor. We were never treated as fair and equal partners from the beginning. Take, for example, the outrageous infrastructure conditions found in our communities. Neskantaga, a fly-in community 400 kilometres north of Thunder Bay,  has been under a boil water advisory for 26 years. People are unable to drink from the tap, wash their vegetables, or bathe their children in running water.

The provincial government has allowed the water crisis in Neskantaga and other First Nations communities to go on for years on end, refusing to invest in water infrastructure, like pumps, treatment plants or piping. And I have to ask myself: Would children and elders be allowed to suffer from water-borne illnesses or skin rashes if their skin was white? Would three generations live in a mouldy house with no heat? Would 13-year-olds be sent on a plane to a high school 500 kilometres away?

The provincial government is missing in action, using jurisdictional excuses not to build, fix or fund on reserve—no adequate housing, no high schools for First Nations youth in their communities, no hospitals, and not enough on-reserve medical health services. To me, this is what racism looks like.

My reality shows the stark contrast between two worlds: First Nations and non-First Nations, constantly competing for relevance in my mind. Daily, I walk through the heavy, carved, wood front doors and go into the legislature’s chamber where 124 MPPs debate the current issues. But I represent First Nation and non-First Nation people. Even though we come from different backgrounds, we are united in our needs as a far north riding. Kiiwetinoong is the largest riding in the province; ot extends from the Manitoba border on the west to Hudson’s Bay in the north, and we share this land.

The COVID-19 pandemic has exacerbated the health and social inequities in Kiiwetinoong, and is starkly evident in the mental health crisis our communities continually face. Since the start of coronavirus, we have lost 10 people to suicide—the youngest only 13 years old. Our communities have limited doctors, minimally trained mental health specialists or facilities to address the crisis, and we do not have well-stocked pharmacies.

There are few paramedics in many of the communities, or coroners for that matter. Yet both the Ambulance Act and the Coroner’s Act are supposed to provide services for all the people in Ontario. So what about us?

When governments play the game of jurisdictional ping-pong with the lives of First Nations and other communities in the north, it is like we are not part of Ontario. We are strangers in our own land. Unwelcome members of society.

So, today our relationship teeters. We need the answer to one question: Are we partners or not?