As we remember a mosque massacre, let's find the hero within us

Opinion: Jan. 29 marks one year since the horrifying Quebec massacre. We must honour Aymen Derbali's selfless heroism, but we can all go further. 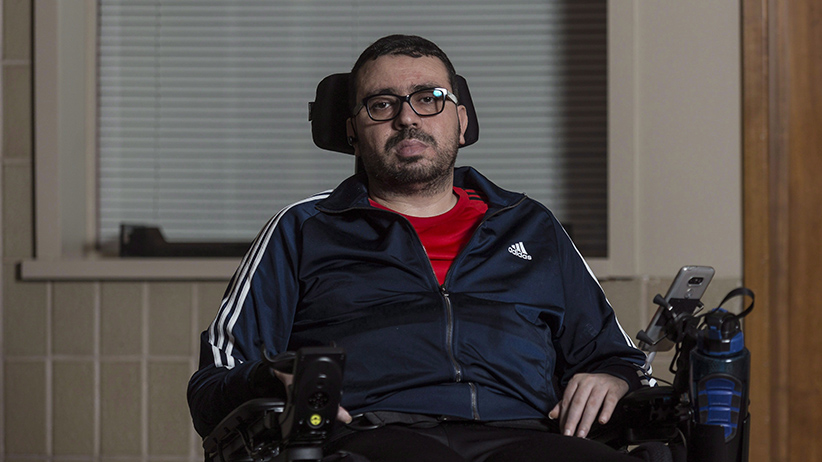 Aymen Derbali poses for a photo in Quebec City on Wednesday, Dec. 27, 2017.(THE CANADIAN PRESS/Francis Vachon)

The upcoming anniversary of the mosque massacre in Quebec City should inspire us to think not only of its numerous victims, but of that night’s hero—and all those who stand up selflessly for others.

When the shooter entered the Islamic Cultural Centre on Jan. 29 of last year, one worshipper turned to face him while others understandably ran to escape. As the bullets began to punctuate the air, the walls, and the bodies, Aymen Derbali attempted to lock his gaze with the murderer. “I tried to concentrate so that he wouldn’t fire on others,” he has since explained. “I would rather have been paralyzed for life than to have fled and been left unscathed, without having done something to help people.”

By refusing to run or hide, Derbali was shot seven times; two bullets remain lodged in his spine. The hard-working father of three with a bright future ahead of him lost his ability to walk forever that night because of his decision to stare down the vilest form of hatred imaginable.

It’s difficult to fully appreciate the incredible risks that heroes take to save other people. We can try by imagining what that moment in the prayer room must have been like. Did Derbali think of his family, his friends, his own life, in that split second? Or was it simply his own innate compassion that informed his actions in those brief, life-changing moments?

Little is fully understood about what compels people to act heroically. American psychologist Philip Zimbardo is one of the world’s leading researchers in this field. He founded the Heroic Imagination Project that aims to “build heroes” based on a belief that such behaviour can be taught. Other researchers like Canadians academics William Dunlop and Lawrence Walker concluded from their research that certain personality traits make it more likely for some people to act more heroically than others.

Whatever the secret formula, what’s clear is the world will always need more heroes. With evidence of rising hatred towards minority communities across the Western world—thanks in part to divisive rhetoric of various politicians and ideologues—we should celebrate those who stand up to it at every opportunity. Those who defy what to most of us would be the easiest choice—to do nothing. “Few people do evil and fewer act heroically,” Zimbardo has said. Everyone else falls into the category of what he terms “reluctant heroes.”

True heroes are people like Jake Taylor, a young Vancouver man who stepped in to disrupt an attack against a young woman on the Vancouver SkyTrain. Passengers silently watched a man yell obscenities at Noor Fadel, an 18-year-old woman wearing hijab. No one intervened when the man attempted to grab Fadel’s head and push it towards his crotch. No one except for Taylor. He instead rose up and managed to get to Fadel and the aggressor just seconds after the man had slapped her across the face, threatening to “kill all Muslims” and get him off the train.

RELATED: Why a lone Good Samaritan stepped up in a Vancouver attack on Muslim teen

“I looked at the passengers and everyone saw that he did it, but they were all just sitting. No one got up, no one said a word,” Fadel described in a media interview. When Taylor was asked why he stepped up when others didn’t, the 21-year-old shrugged it off as most heroes tend to do, and said that any one of his friends would have done the same.

Similar stories have played out in the United States over the past year—but with deadly consequences. Rick Best and Taliesin Myrddin Namkai-Meche were stabbed to death after they tried to stop Jeremy Christian from yelling racial slurs at a visibly-Muslim woman and her friend on public transit. A third young man, Micah David-Cole Fletcher, was injured in the attack.

As a high school student, Fletcher had won a poetry slam with a piece in which he imagined what it would be like to be an Iraqi girl in a headscarf, watching her neighbourhood and home burn under foreign bombardment.

This reinforces what seems to be a common trait among heroes—they can imagine how others feel and they can empathize. The other victims were similarly described: as individuals who deeply cared about others. “If he knew he was going to die, he still would have done what he did,” said a friend of Namkei-Meche. Best’s son was equally confident that his father wouldn’t have regretted his actions that day. “He died fighting the good fight, protecting the innocent. Honestly, that’s what he probably would’ve wanted,” he shared in a media interview.

“The opposite of hero is not villain, but bystander,” mused Matt Langdon, founder of the Hero Construction company, a U.S.-based non-profit that teaches children how to stand up for one another. It’s a lesson more of us should internalize.

As we mark Jan. 29, let’s not forget Derbali and others like him—and let’s take steps to nurture the hero within each of us.

Amira Elghawaby is a journalist and a human rights advocate based in Ottawa.