At a tense time, a bomb scare has gripped America—just as it did a century ago

Cesar Sayoc has been arrested for allegedly sending mail bombs to Democratic figures, drawing telling parallels to a 1919 spate of terror in the U.S. 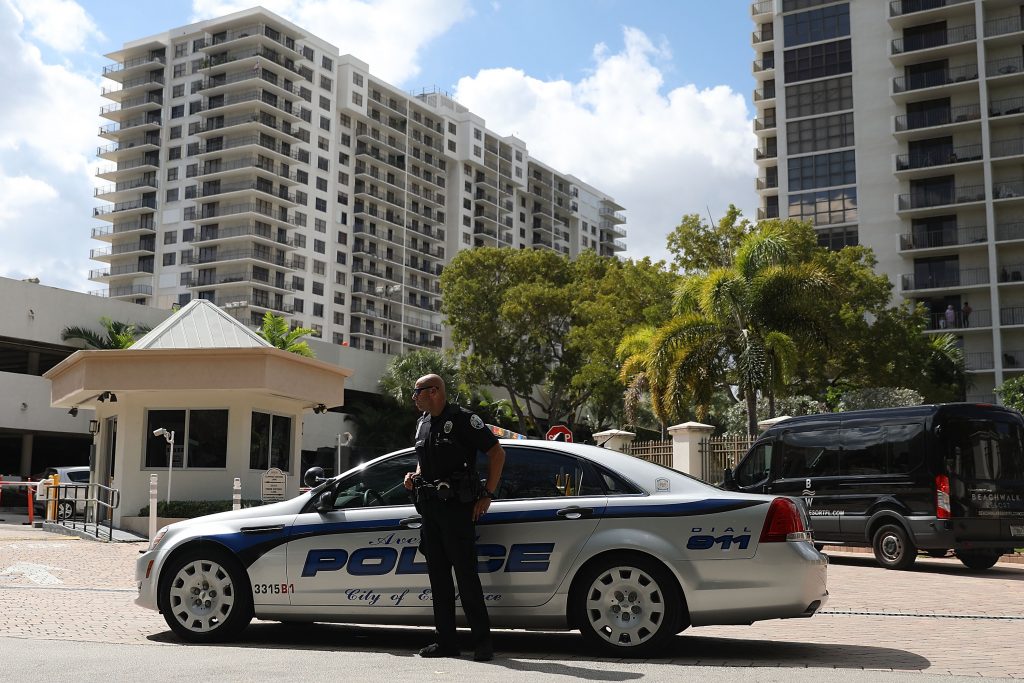 An Aventura City police officer stands across the street from the condo building that has a possible connection to alleged mail bomber Cesar Sayoc and his mother on October 26, 2018 in Aventura, Florida. (Joe Raedle/Getty Images)

This week, Americans have been riveted by news over a pipe bomb scare, sent in the mail to several high-profile figures known for their opposition to the Republican Party: businessman George Soros, former U.S. attorney-general Eric Holder, former CIA director John Brennan, actor Robert De Niro, Congresswoman Deborah Wasserman-Schultz, as well as Joe Biden, Hillary Rodham Clinton, Bill Clinton and Barack Obama. Reports suggest that congresswoman Maxine Waters was sent two, while the newsroom at CNN was evacuated when they received one.

While shocking, especially this close to a midterm election that was already probably going to be volatile, it’s hardly the nation’s first serial bomb scare. Anti-modern anarchist Ted Kaczynski, a.k.a. the Unabomber—who mailed or hand-delivered bombs to various targets from 1978 to 1995 from his remote cabin in Montana—comes to mind, for one. And in addition to lynchings and cross-burnings, the Ku Klux Klan deployed bombs to terrorize Jews and African-Americans throughout the 1950s and 1960s in several states, including the 1963 bombing of the Sixteenth Street Baptist Church in Birmingham, Alabama, which killed four young African-American girls.

Those are the high-profile moments. But the one that’s perhaps become lost to history may also have the most to teach us—a deadly domestic terror campaign in the United States that started in 1916, which brought bombings to San Francisco, Milwaukee, and then, in April and June of 1919, the mailboxes of dozens of American politicians, judges, and government officials.

It all began with Luigi Galleani, an Italian-American anarchist who had migrated to America in 1901, at the age of 40, after a couple of decades of brushes with the law in France, Switzerland and Italy. He continued his revolutionary activities in the United States, where he worked to escalate existing labour tensions, lecture to like-minded socialists and anarchists, and encourage violent, direct action to effect change. In 1905, he published a (flawed) manual on how to build a bomb, part of the “propaganda of the deed” philosophy that he and other anarchists subscribed to, premised around the idea that only real political action can inspire revolution.

Thanks to his alleged eloquence and powerful oratory, Galleani grew a loyal following of disciples—the Galleanisti. And when Congress passed the 1918 Immigration Act—which provided a mechanism for deporting and denying entry to foreign-born anarchists and labour activists—they were devastated to learn it would lead to Galleani’s deportation. And so the political figures who supported the Act soon became targets.

Historian Allan Levine describes June’s round of bombs in his 2005 book, The Devil in Babylon, at the start of his chapter on the Red Scare. On Jun. 2, 1919, just after 11 pm, United States attorney-general Mitchell Palmer and his wife, Roberta, were woken by an explosion outside their front door. Neighbours Franklin Delano and Eleanor Roosevelt, who had only just come home and shut their own door across the street, narrowly missed being hit by the shrapnel that blew out their windows and, in fact, the bomber himself, who was dismembered. Seven other bombs were detonated that night, killing a night watchman in New York. There was no doubt the Galleanisti were to blame—the “Fighting Anarchists” had taken credit and left a message. “War, Class war, and you were the first to wage it under the cover of the powerful institutions you call order, in the darkness of your laws. There will have to be bloodshed; we will not dodge; there will have to be murder: we will kill, because it is necessary; there will have to be destruction; we will destroy to rid the world of your tyrannical institutions.”

The Jun. 2 bombings represented the second time Palmer had been the target of an assassination attempt—a package had been addressed to him in April, too—and though he had a reputation for moderation and pacifist ideals, this represented a breaking point. As Levine writes, Palmer made it his mission to assemble a task force to root out the all radicals—not just the Galleanisti, but anyone remotely associated with Bolshevism, anarchism, socialism or labour activism.

On Jan. 2, 1920, with the assistance of J. Edgar Hoover, the newly appointed head of the Department of Justice’s Radical Division, he orchestrated the “Palmer Raids,” a massive, violent six-week series of arrests that took place in 30 cities and saw some 10,000 suspected “Reds, Bolsheviks, Anarchists and Terrorists” detained—and more than 500 deported. The raids targeted Italians, Eastern Europeans, and anyone who might have happened to be trying to take a class in a meeting-house associated with socialism. Unsurprisingly, many were ill-advised on their Miranda rights, and evidence was hardly necessary for charges; indeed, weeks after the second round of bombings, Galleani was deported, despite a lack of evidence that he perpetrated the violence—only that he likely incited it.

But this crackdown failed to prevent the Wall Street Bombing of 1920, which killed 30 and injured hundreds more on Sept. 16, with a blast that tore through the area near New York City’s J.P. Morgan Bank. Although nobody has ever conclusively proved who was responsible, late historian Paul Avrich, the authority on anarchists of that era, argued it was the work of Mario Buda, a Galleani follower seeking revenge for the deportations.

Anti-immigrant sentiment only rose after that—though it was already high at the time. Although many Americans might have had qualms about how the Act set up a two-tiered standard for the right to free expression, the spectre of the 1917 Russian Revolution loomed, breeding more distrust for immigrants. Even before that, President Woodrow Wilson had issued a warning against the “hyphenated American” in 1915, swearing that these “creatures of passion, disloyalty and anarchy” would be “crushed out” since they were poisoning the nation, the kind of irresponsible rhetoric from a powerful figure that only served to increase tensions.

And to some degree, these events set the tone for the 1920s, which saw much tougher immigration laws imposed in 1924 and the rise of the Ku Klux Klan. The ideas that recent immigrants were disloyal, ruled by passion and lawless (according to no less an authority than President Wilson) were used by the Klan as a pretext for terrorizing perfectly law-abiding hyphenated Americans, Jews and African-Americans, long after the Galleanisti were gone.

Although it’s unlikely that the motivation for this terror campaign was related to socialism, no terror act is very far removed from Galleani’s “propaganda of the deed” thinking. And just as it was in 1919, it’s not difficult to see what powerful figure is now inciting the violence, thanks to reports of pro-Trump, anti-Democrat photos plastered over the van of the alleged mail-bomber, Cesar Sayoc. But culpability is a slippery thing these days, and it’s not impossible to imagine this incident being spun into a story about immigration as people dig into Sayoc’s background, just like in 1919—proving just how long it’s served as a fear-mongering wedge issue that some parties use as a political weapon.

Last time, the propaganda of the deed and the words of an overzealous president ushered in a decade of tougher immigration laws, civil rights violations, and only more domestic terror. Americans are going to have to fight hard to make sure it doesn’t happen a second time.