Opinion: The raid of the office of Michael Cohen—the U.S. President's longtime personal lawyer—is a reminder of what Donald Trump is doing well 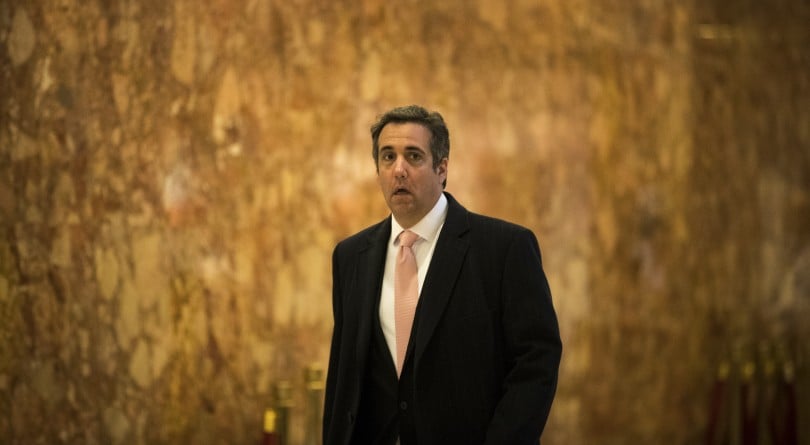 NEW YORK, NY - JANUARY 12: Michael Cohen, personal lawyer for President-elect Donald Trump, walks through the lobby at Trump Tower, January 12, 2017 in New York City. Trump and his transition team are continuing the process of filling cabinet and other high level positions for the new administration. (Photo by Drew Angerer/Getty Images)

In the wee hours of April 9, the F.B.I. executed a raid on the Park Avenue hotel room and Rockefeller Center office of Michael D. Cohen, President Donald Trump’s longtime personal lawyer. The agents took emails, business records and documents that may be evidence of federal crimes. These crimes include wire fraud, bank fraud and campaign finance violations. According to the New York Times, and confirmed by several other media outlets, some of the seized documents pertain to payments made to adult film actress Stormy Daniels and Karen McDougal, an actress and model who has been featured in Playboy. Then, late on Apr. 12, news broke that suggests the F.B.I. may also have seized recordings. It seems Trump’s personal lawyer taped some of his conversations, apparently for “leverage.”

We just have to accept it: the Trump presidency is the longest and worst elevator pitch ever and we’re stuck listening to it.

All day, every day, we’re bombarded with the breaking news equivalent of “No, wait, wait, hear me out, this is where it gets good. Then there’s this blonde porn star, you see, but she’s, like, all smart and sassy, and there’s this scene in a parking lot where a guy comes up to her and says, ‘Leave Trump alone. Forget the story.’ Then we cut to a shot of her daughter in the back seat of her car, and the guy says, ‘That’s a beautiful little girl. It’d be a shame if something happened to her mom.’ Then there’s this creepy, pale Australian guy who lives in the Ecuadorian embassy in London and likes to make people cut his hair and most of the budget will be spent on Russian extras…” And the pitch just keeps going, and more and more it feels like the door will never open.

READ MORE: How Stormy Daniels is closing the credibility gap for women

Michael Cohen has never not had this face. I challenge you to find one image of him that does not convey that exact emotion. Some people have a natural ear for music; others take easily to sports. Michael Cohen was born with an innate talent for expressing bewilderment, shock, and resignation all at the same time.

Looking at that face, it’s hard not to believe that Cohen’s first words weren’t “Be careful with that ashtray, Agent Simmons.”

But while it’s easy to see this raid as just one more link in the long chain of disasters that have characterized the Trump presidency, I choose not to see it that way.

Look, I’m no Trump supporter, but as a very reasonable moderate who always considers both sides, I have a sacred duty to find at least one thing to respect about Donald Trump. Sure, his goals are horrible and his means of attempting to achieve them even worse. Yes, he might not be draining the swamp — unless by “swamp” you mean “public purse” and by “drain” you mean “buy Scott Pruitt a US$43,000 Cone of Silence” — and he certainly hasn’t Made America Great Again. But there is one part of the Trump effort that really speaks to me.

Hats off to his “Make Trump Associates In Legal Jeopardy Again” agenda, I say.

Trump is doing a truly impressive job of getting people connected to him in serious legal trouble. Michael Flynn was made national security advisor as a reward for his work on Trump’s campaign, but he lasted less than a month in the role before resigning in the wake of news reports he’d been a Chatty Cathy with Russians. Soon, with both him and his son facing charges, Flynn flipped to special counsel Robert Mueller admitting he’d “willfully and knowingly” made “false, fictitious and fraudulent statements” to the F.B.I., which is both a really stupid thing to do, and a felony.

That end seems grim, but Flynn is actually something of a Trump associate success story. After all, former Trump campaign manager Paul Manafort didn’t even make it to election day and he has been rewarded for his services by being indicted on a total of 27 counts, including failing to register as an agent of a foreign power, money laundering, as well as bank and tax fraud; Manafort now faces a potential prison sentence of what legal experts call a “bajillion years.”

Rick Gates, Trump’s deputy campaign manager, initially pled not guilty of eight counts of money laundering and tax fraud before singing like a canary who was suddenly hit with 23 more charges.

George Papadopoulos, a foreign policy advisory on Trump’s campaign, also pled guilty to making false statements to the F.B.I. The Trump campaign could really have done with a sign about this over the sink in the bathroom: “Please wash your hands before returning to work and don’t lie to F.B.I. agents.”

Trump’s son-in-law Jared Kushner has so far avoided any actual indictments (but not the shame of having his security clearance downgraded). Still, he is reportedly getting unwanted F.B.I. attention lavished on both himself personally and on his family’s extensive business interests.

At this point, the Make Trump Associates In Legal Jeopardy Again agenda has been so effective, I imagine no one who has so much as shook hands with Trump is sleeping well. New York hot dog vendors must be thanking their lucky stars that Trump’s famous germophobia makes it highly unlikely he’s ever tried to eat any of their wares, even with a knife and fork and way too much ketchup.

A friend of mine made the mistake of watching Home Alone 2: The One With the Trump Cameo and the next thing he knew, he had a parking ticket.

No one knows exactly what’s going on with Trump and Deutsche Bank, but sources tell me even the janitors at Deutsche Bank are packing a toothbrush and a change of underwear when they go to work every morning.

Every golf caddie in America now wears an orange jumpsuit to the green. “I’m pretty sure I caddied for someone who played golf with a guy who once sailed by Mar-a-Lago,” said a caddie I approached for comment. “Everyone’s just trying to be realistic,” he added, putting down a player’s bag and holding out his hands for cuffing.

Meanwhile, White House officials, people close to the president and others familiar with the episode—any episode—have a lawyer on speed dial, and chefs all across America are busily checking to see whether overcooking an otherwise perfectly decent steak is actually a felony or just feels like one.