Bill C-5: Should the Canadian government train its judges? 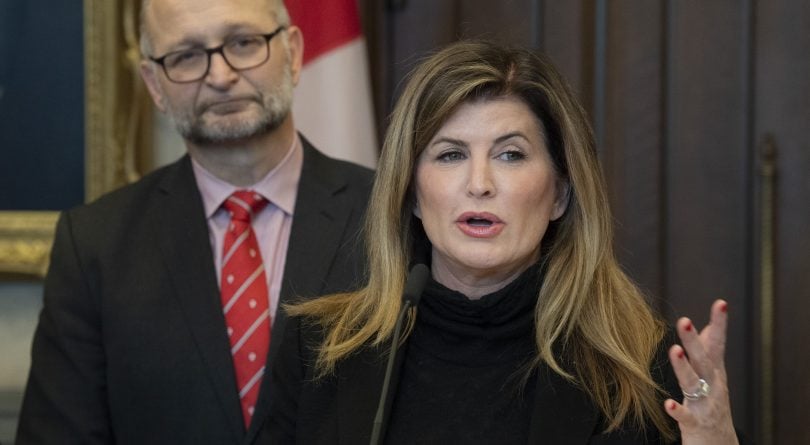 Minister of Justice and Attorney General of Canada David Lametti looks on as Rona Ambrose speaks about a government bill on Feb. 4, 2020 on Parliament Hill in Ottawa. (Adrian Wyld/CP)

Gib van Ert practices civil litigation and public law in Ottawa and Vancouver. From 2015 to 2018, he was the executive legal officer at the Supreme Court of Canada.

Former Conservative MP Rona Ambrose’s last legislative project before leaving Parliament in 2017 was a private member’s bill that would have required lawyers seeking to become federally appointed judges to complete a mandatory course on sexual assault law. The Ambrose bill was a response to the Robin Camp affair, in which a federally appointed judge resigned following a series of disastrous mistakes in a sexual assault trial.

Ambrose’s bill never became law, but the Liberal government has now revived the idea. Bill C-5 introduces a new eligibility requirement for appointment to a superior court. Right now, the only prerequisite is section three of the Judges Act that states appointees must have at least 10 years of experience as a qualified lawyer. Under the government’s bill, candidates would also have to promise to “participate in continuing education on matters related to sexual assault law and social context” as a condition of their appointment.

The need for judicial education in sexual assault trials is clear. The law of sexual assault is plagued by persistent rape myths and stereotypes, despite Parliament’s efforts to expunge them. When courts get these cases wrong, the human cost is high. Perpetrators may go unpunished. Witnesses may be humiliated. Victims may be discouraged from reporting crimes.

The idea of judges taking courses on sexual assault law is not new. Canada’s lead judicial training body, the National Judicial Institute, has been offering courses about sexual assault and related criminal law issues for years. The institute has also provided training on broader “social context” issues such as discrimination, Indigenous issues and poverty. The idea that judges, like other professionals, should submit to continuing education courses would have been controversial a generation ago. But it is widely accepted today. The 2018 professional development policy of the Canadian Judicial Council requires new judges to take courses in their first five years of service.

What’s new, and troubling, about Bill C-5 is not that judges have to take courses. It’s that this requirement is coming from the government. Up to now, judges took courses because they wanted to, or their chief justice suggested it, or the Judicial Council required it. Under Bill C-5, the training is effectively mandated by law.

What’s wrong with that? We can all agree that judges should be fully trained before conducting a sexual assault trial. But sexual assault is not the only issue politicians and voters might want judges to know about. If Parliament has the power to force judges to take courses, why stop at sexual assault? Why not put a few more required courses on the judges’ curriculum? Why not train our judges in systemic racism, Indigenous laws and rights, climate change, national security and counterterrorism, border security and unlawful migration?

All of these issues are important to at least some voters. So it is not hard to imagine a future federal government adding them, or some other hot-button issue, to the eligibility requirements for judicial appointment. Once we open the door to treating section three of the Judges Act as a course list, that list is likely to grow.

But the problem is not the length of the list. It is the existence of a list at all. Lurking behind the idea of legislated mandatory training for judges is the notion that judicial decision-making is just another means for governments to advance their policy agendas. The implication is that judges, like public servants, can be issued marching orders by the government of the day.

To some extent judges can be given marching orders. Every statute Parliament or a province enacts is a sort of direction to judges. Governments and legislatures depend upon courts to give effect to the laws they make. There may not seem to be much of a difference between telling judges what to do by passing a law and telling them what to do by making them take a course. But it is a distinction we should make—it’s the difference between telling judges what to do, and telling them what to think.

Unlike public servants, whose ultimate job is to carry out government decisions and policies according to law, judges are frequently called upon to scrutinize government action. The core idea behind that elusive phrase, “the rule of law,” is a society where we can meaningfully say that something done by the government was unlawful. The people empowered to reach that conclusion and give it consequences, are the judges.

For judges to hold governments to account like this, they need to have true independence from the executive and legislative branches of government. And people need to believe they have it. Who will bother suing the government if they think the judges are government stooges?

These concerns are why Canadian judges keep insisting that judicial education should be “judge-led.” The Judicial Council made that point when the Ambrose bill was before Parliament, and again the day after Bill C-5 was announced. In the guarded language judges use when forced to talk about current political issues, the Council’s statement (“Judge-led training strengthens confidence in the Canadian justice system”) gently insists that judicial training is “properly and exclusively the judiciary’s role.”

The Judicial Council is right. Governments setting judges’ curriculums, instead of trusting judges to train themselves as they have done for decades, risks undermining public confidence in our judges’ independence from government. Taken to extremes, government training of judges harms not just public confidence in judicial independence, but independence itself. Most Canadians do not know this risk from personal experience. But some new Canadians do. Other parts of the world are not short of make-believe courts that slavishly follow the leads of their national governments in farcical caricature of what free peoples expect from their judges.