Evan Solomon: The federal government now owns the pipeline issue, and after the finance minister's latest move, it will likely own the pipeline too 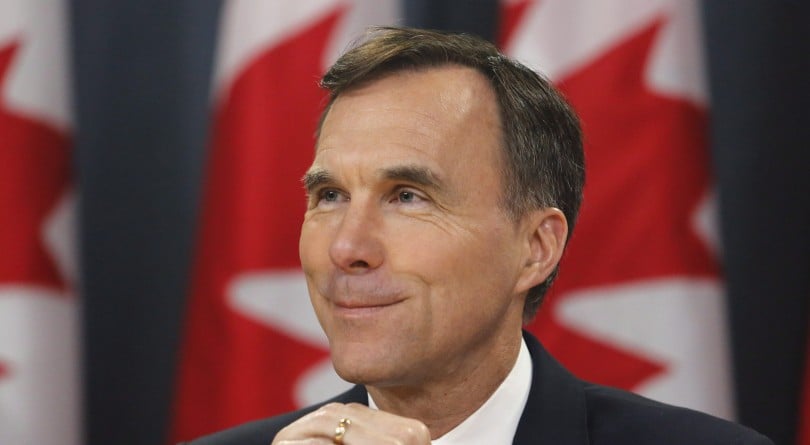 Finance Minister Bill Morneau speaks about the TransMountain pipeline project at a press conference in Ottawa on Wednesday, May 16, 2018. (THE CANADIAN PRESS/ Patrick Doyle)

The Trans Mountain pipeline has become a high stakes game of Texas Hold’em against a profitable Texas-based oil company, and the federal finance minister just called their bluff.

In a Wednesday morning press conference, Bill Morneau announced that the government is “willing to indemnify the Trans Mountain expansion against unnecessary delays that are politically motivated,” meaning that whatever costs Kinder Morgan has incurred due to the political action in B.C., the federal government will cover.

It was a bold if not entirely unexpected move, but now Kinder Morgan has to decide to fold or stay in the game. “Kinder Morgan has been trying to hose the taxpayer, asking for money to support their pipeline or they will stop it altogether, and we just called their bluff,” a senior government source told me. “We were not going to be held for ransom.” Fair enough, but now what?

First thing’s first; the Kinder Morgan shareholders will weigh in on Wednesday. Kinder Morgan is still threatening to pull the plug on the project by May 31, but now, with the new indemnity clause, it will have reason to have second thoughts.

Kinder Morgan’s strategy has been to negotiate a deal behind closed doors, but it got surprised today when Morneau out-flanked it, racing to the National Press Theatre to tell the the country—and more importantly Kinder Morgan shareholders—that the government was ready to eat all money lost.

Basically, Morneau did his best Clint Eastwood impression: Go ahead, make my day. Except he did with your tax dollars, not a Magnum.

The question is, how much money? No one knows that yet. Kinder Morgan claims it is losing about $200 million a month and has spent around $1.2 billion on the pipeline expansion so far, but much of that was spent before all this became political, so how much the taxpayer is on the hook for remains a negotiation point.

It is likely hundreds of millions of dollars, but that might be just small beans. According to a senior government source I spoke to, the government is prepared to buy the pipeline outright from Kinder Morgan, and the negotiations are already underway to do just that. *Hours later, the source called me back to say that they had misspoken and that negotiations have not already started but that they are not ruling this out. That’s right, don’t be surprised if Kinder Morgan decides it doesn’t have the stomach for more pipeline politics and sells Trans Mountain to the government.

The Liberals will then try to re-sell it to another company, or get institutional investors like pension funds involved in a partnership, which is the most likely scenario. They believe they will make money from this deal. (Talk about going all in.) The press conference cast Morneau as the new salesman-in-chief for the project, openly trolling for investors.

“If Kinder Morgan is not interested in building the project,” Morneau said, “we think plenty of investors would be interested in taking on this project, especially knowing that the federal government believes it is in the best interest of Canadians.” It was also another message to Kinder Morgan shareholders: You want to lose this project when you have federal government opening up the bank vault for you?

Taxpayers might wonder why the government would buy a pipeline if Kinder Morgan doesn’t want to invest in it. The federal government fully believes the pipeline will be profitable, and that B.C. will lose its case in court. Not only that, it believes that the polls in B.C. are running in its favour to build the pipeline. So to Ottawa, it’s a no brainer.

B.C. is still going to court to determine if it has the jurisdiction to stop the expansion. It believes this case will end up in the Supreme Court, a process it had hoped would take enough time to scare off any investor.

The federal government just put a hedge on that, but B.C. will plow ahead anyway. Nothing that happened on Wednesday will do anything to stop the court process, and it was interesting that Morneau did not point out a single constitutional law that he believes B.C. has violated by going to court. Still, the federal government believes it will win in the end, and putting up the cash buys it the time it needs to do just that.

There are still a lot of questions. Would the environmental approvals given to the pipeline expansion under Kinder Morgan ownership apply to a new owner, or does a new lengthy process have to start? Sources tell me if the federal government buys the project outright, no more consultation would be needed and the question of federal jurisdiction of the project would be moot altogether. But the courts would still have to rule on that.

All this is a high-risk strategy and the taxpayer should be wary. Morneau won’t say how much all this will cost—a sign that negotiations are already underway. Already the government is so afraid of blowback on the costs that it is laying the blame on B.C. for any costs incurred—basically declaring open warfare on B.C. Premier Horgan.

Will voters buy that? And what happens if massive anti-pipeline protests do erupt across B.C.—as has been promised? Does the federal government really start construction on “their” new pipeline and risk some critical seats in the lower mainland it will need in the next election? The feds now own this issue and very soon, will likely own this pipeline completely.

For now, this a very expensive bluff. In Texas Hold ‘em, though, nothing really matters until what is called “the river,” the last card dealt. A Texas company like Kinder Morgan understands this stuff better than anyone. Which is why, despite Morneau’s bluff call today, we are still a long way from the river, or, in pipeline terminology, the ocean.