Judy Grant: My life as a police officer depends on the protection of a team. Systemic racism within the police institution leads to civilian deaths as well as figurative deaths. In my case, extended sick leave due to traumatic mental stress. 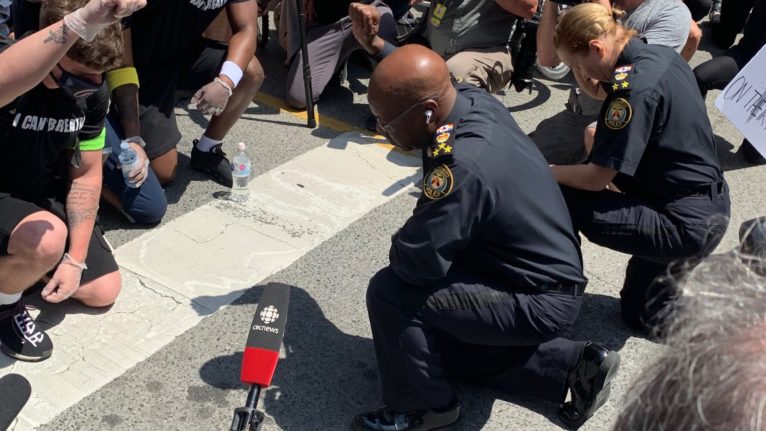 Judy Grant is a sergeant on leave with the Toronto Police Service. She is also a Ph.D. candidate at the University of Toronto. Her research focuses on the intersections of race (specifically Blackness), gender, class, sexuality and power within contemporary policing.

On a warm summer evening in 2016, While patrolling in a police cruiser along the Eglinton Avenue West neighbourhood in Toronto, I pulled into a parking lot. Many who lived in the neighbourhood knew me and were aware that I had joined the Toronto Police Service, just like I told them I would. Many of the Black people in that community were proud of me despite their everyday challenges with the police. They expressed that they were happy that a Black woman, from the Caribbean, was wearing a police uniform. I had recently been promoted to the rank of sergeant after being with the Toronto Police for 16 years.

An elderly Black woman greeted me as I exited the cruiser, watching me carefully. “You look like someone I know,” she said, “your face looks familiar.”

I pointed to where I used to live in the neighbourhood. For years, I had lived above a Black-owned barber shop before joining the police service. Then she stepped closer to the open window of the police cruiser. “Yes! You look like that woman on TV,” she said. “The one they killed. The police killed her. You look like Sandra Bland.”

MORE: We must defund the police. It is the only option.

The smile disappeared from my face. I slowly got back into the cruiser and returned to the parking lot of the police station. Once there, I googled a photograph of Sandra Bland—I could see the resemblance.

I joined the police department because I wanted to make a difference within the communities of Toronto. I was recruited and invited to join the department “to bridge the gap between the police and the Black community,” of which I am a proud member. At the Ontario Police Academy in Aylmer and the Toronto Police College, I was taught that “the police are the public and the public are the police”.

We have seen photographs circulating of police officers taking the knee in public, supposedly demonstrating solidarity with the Black community. But what does it mean to take the knee in public while tightening the noose in private? In North America, policing is rooted in the history of slave patrol and the policing of Indigenous peoples. This history reminds us that the oft forgotten role of police is to hunt down and contain those who do not belong—in many cases Black and Indigenous people.

The Black and racialized officers who critically question their work roles, complain about the anti-Black racism and speak out against discrimination, endure punishment that shows up in the form of a hostile work environment rife with systemic racism. Reprisal, differential treatment and professional standards investigations are only the first tier of abuses that some officers suffer. This is what happened to me before I went on stress leave in 2016.

Earlier that year, a draft copy of my Ph.D. statement of intent—outlining my proposed research inquiry into the intersectional experiences of Black and Indigenous women working in policing in Canada—was “discovered” on a work computer. This discovery was made by an older white male staff sergeant (ranked one tier above me). The staff sergeant read the document in its entirety and circulated it to my peers who also read, discussed and shared it with the unit commander in charge of the station. An investigation was launched by the unit commander on the staff sergeant involved to ensure that there was no misconduct on the part of the police institution. Once the investigation ruled that there was no misconduct involved, that’s when the harassment began.

One of my peers, a white man, who also read the draft, invited me to join him under a large tree in the station yard. He demanded that I explain myself and my proposed research project to him so that he could understand what it entailed. The draft concerned him, he said. He worried it would threaten his own job security because my critique of contemporary policing would get him fired.

I told him that the scope of the research transcends specific police departments to examine the structural and systemic problems within the force. “I do not want to work with you anymore and neither do the guys,” my peer said. Each of his words contained piercing precision and hostility. “I don’t trust you. I do not trust that you will police Black people.”

My life as an officer depends on the protection of a team. The consequence of anti-Black racism and trauma in policing is death. Systemic racism within the police institution leads to civilian deaths as well as figurative deaths. In my case, extended sick leave due to traumatic mental stress.

In the wake of the public murder of George Floyd by police in Minneapolis, there have been global protests and demands for justice for Black lives. Calls are being made to defund police and abolish policing institutions, while others are promoting further reform by addressing systemic racism from within these institutions of power.

I am a Black woman, of Afro-Caribbean descent and in my 16 years of service working as a police officer, I patrolled and policed communities that reflected the realities of my own life—immigrant, refugee and low-income diasporic Black and brown communities where people struggle to simply survive. I believe that Black people need to keep organizing and protesting. Black people also need to be genuinely supported. Allied people who want to work alongside Black people in solidarity, need to keep applying the pressure.

Policing institutions must consider, who is being “served”, what is being “protected”, and why. The ongoing, unjustifiable police killing of Black and Indigenous people highlights how systemic racism ensure the protection of some, while facilitating the murder of others. Systemic racism operates within policing to maintain and reinforce the system of white supremacy. For meaningful change to occur this dominant structure will have to be dismantled. Community members, activists, scholars and those advocating for accountability and change, are voices and perspectives that should not be ignored.