Black voters saved Alabama—despite efforts to keep them down

Opinion: Doug Jones may have defeated Roy Moore in their Senate race, but Alabama’s electoral history is still marked by efforts to frustrate the Black vote 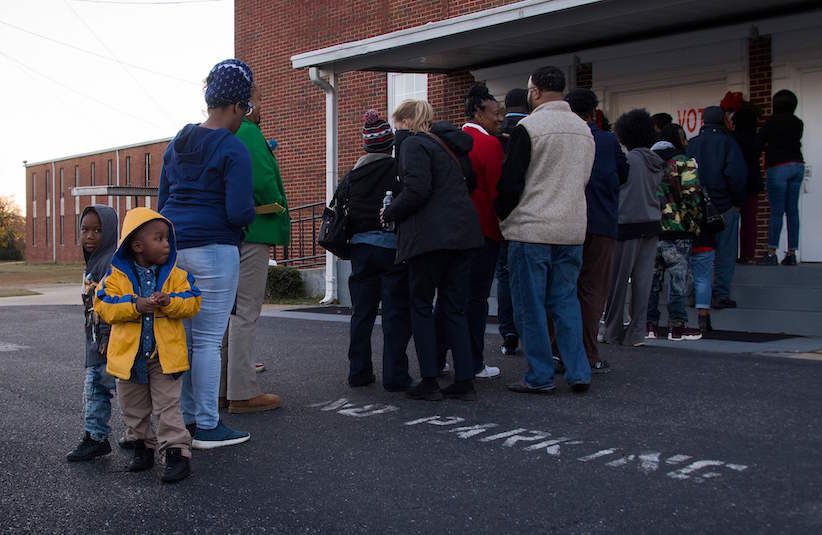 Voters stand in a long line that stretches out the door to vote at Beulah Baptist Church polling station in Montgomery, Alabama, on December 12, 2017. Alabama voters were casting the last ballots Tuesday in a pivotal U.S. Senate contest between a Republican dogged by accusations he once preyed on teenage girls and a Democrat seeking an upset win in a deeply conservative southern state. (Jim Watson/AFP Photo)

When Alabama State Senator Sam Engelhardt was elected to office in 1954, he arrived with a mandate from the pro-segregation White Citizens Council, of which he was a high-ranking member: to quash the growing threat of Negro rule in the state. In 1930, only 30 Black voters were registered in Engelhardt’s home seat of Macon County, where Tuskegee University was built; that number grew to 75 registered Black voters in 1940, 130 registered in 1950, and subsequently leapt to 1,100 registered in 1957, within a district that constituted one of the highest percentages of Black residents of any county in the nation. Alabama segregationists feared that by 1960, Black voters would comprise the majority in Macon County and effectively control its representation through the federal level.

Over the protests of those voters, Sen. Engelhardt authored Local Act No. 140, which transformed Macon’s electoral map from a square to a 28-sided figure resembling a seahorse. With the bill’s passage in 1957, the concentration of Macon county’s Black voters were scattered into neighbouring districts, while leaving white voters undisturbed. Engelhardt even attempted to abolish the county altogether, but the residents of those districts rejected the idea. By that point, the damage was done, even though the U.S. Supreme Court’s Gomillion v. Lightfoot ruling in 1960 deemed the gerrymandering illegal, and restored the county’s boundaries. Black voters in Macon County, for nearly a decade, remained all but disenfranchised through layer upon layer of discriminatory voting procedures designed by white legislators to keep the ballot box out of their reach.

Dating back almost to the Reconstruction Era, Alabama’s electoral history is shot through with efforts by white legislators and citizens alike to frustrate the Black vote. Strike down the literacy test (as the Voting Rights Act did in 1965), and a poll tax stands behind it. Strike down the poll tax (as the U.S. Supreme court did in its Harper v. Virginia State Board of Elections decision), and there are massive hurdles yet to be cleared with “vouching” rules, ballot queues as long as nine hours, and felon disenfranchisement. In fact, 11 years after the U.S. Supreme Court ruled in 1985 that Alabama could not use “crimes involving moral turpitude” as a reason to restrict the franchise, Alabama’s legislature re-inserted that very language into a bill which barred voters with a felony record. As a result, more than 140,000 Black Alabamans, comprising 15 per cent of its otherwise eligible voting population, remained shut out in 2016.

On Dec. 12, Alabama’s electorate was tasked with filling the Senate seat vacated by Attorney General Jeff Sessions. Roy Moore, the insurgent Republican candidate, rode a horse to a polling station, and behind him ran a trail of scandal: In addition to the racism, homophobia, and Christian extremism that twice got him kicked out of office, Moore stood accused of sexual assault and predation by multiple women. And yet, Moore was a toss-up to win the election against the Democratic nominee, former prosecutor Doug Jones.

Of the white voters who were tasked to choose between Jones, a man who prosecuted the remaining culprits of the 16th Street Baptist Church bombing, and Moore, a man who was banned from local malls for soliciting underage women, 68 per cent of them decided the alleged sexual predator was the preferable option. Eighty per cent of white evangelicals—again, given the choice of voting for a man who brought to justice the terrorists who claimed the lives of churchgoing children—punched the ballot for Moore. Perhaps most amazing of all, 65 per cent of white women in Alabama managed to stretch their conscience far enough to decide that Moore, alleged by multiple women to have initiated contact while they were underage, should be the one to represent them in the Senate chambers.

MORE: Roy Moore and the hypocrisy of America’s evangelicals

Black voters, on the other hand, broke almost unanimously in the opposite direction. Ninety-three per cent of Black men and 96 per cent of Black women voted for Jones, comprising 29 per cent of the total vote (proportionally higher than their presence in the general population). In order just to make it to the polling station, those voters had to overcome a slew of modern efforts by the state of Alabama to disenfranchise them. Though Alabama Governor Kay Ivey signed a bill clearly outlining “crimes of moral turpitude” earlier this year—drastically reducing the number of felonies which could disqualify them from voting—felons with outstanding fees due to legal bills, court fines, and victim restitution were still unable to vote.

Additionally, Alabama passed a strict voter ID law in 2011, implemented it in 2013 (briefly after the Supreme Court voted to gut the Voting Rights Act), and then shuttered 31 of its 67 DMV offices by October of 2015—most of them in areas with a high concentration of Black voters. In fact, it was Shelby County in Alabama that originally launched the lawsuit against Eric Holder, in his capacity as U.S. Attorney General at the time, which began the chain of events that would eventually result in the Supreme Court’s hollowing-out of the VRA.

Though many media outlets are painting Doug Jones’s victory as a blow to Donald Trump (who endorsed Moore) and the Republican Party (who resumed working on his behalf when it became clear Moore had dug in like an Alabama tick), this is hardly encouraging news. Getting a Democrat elected in a seat for which voters have chosen one Democrat and one Republican since the post-Dixiecrat era required an extraordinary set of circumstances that will not likely scale upward for next year’s midterm elections. It required a superhuman get-out-the-vote effort in the Black community that exceeded even the 2016 general election, a Democratic candidate all but playing Gene Hackman’s heroic role in Mississippi Burning, and a Republican candidate who, in any other time and place, should have been booted into permanent exile and possibly locked up.

All of this in a state that has, almost since its reintegration into the Union, performed what feels like every legislative gambit within its power to deny Black people the right to vote.

There may be a story to be told about the Democrats’ path back to power, and a story about Black people (especially Black women) once again acting as America’s moral ballast. But there’s no escaping the bare facts: The Alabama special election was a one-off spectacle that bordered on bad comedy, and even then, gerrymandering, voter suppression, and a fanatical base that often dubs itself the “moral majority” nearly sent a supremely unqualified and morally compromised bigot to the upper chamber of Congress.

Take Roy Moore out of the picture, and the remainder of these factors still exist. Republican voter suppression efforts are still under way, and the vast majority of states still strip post-incarceration voting rights from those with felony records. Several states are pursuing stricter voter ID laws, and politically motivated gerrymandering continues to deliver votes for Republicans by twisting voting districts into bizarre and inexplicable shapes. Against a traditional and scandal-free Republican like Luther Strange—who lost to Moore in the Republican primary election—Jones likely wouldn’t have stood a chance.

There is no positive future outcome for Democrats which doesn’t involve challenging the long-standing and white-supremacist effort to disenfranchise Black voters. The liberal tendency to trot out celebrities (and, lately, hounding Barack Obama to come out of hiding and once again lead a movement) is largely meaningless if substantial portions of the country’s most solidly Democratic bloc is unable to vote. Until then, every election will remain a struggle against the ghosts of the Jim Crow south, weighting the scale in favour of white America’s worst impulses.